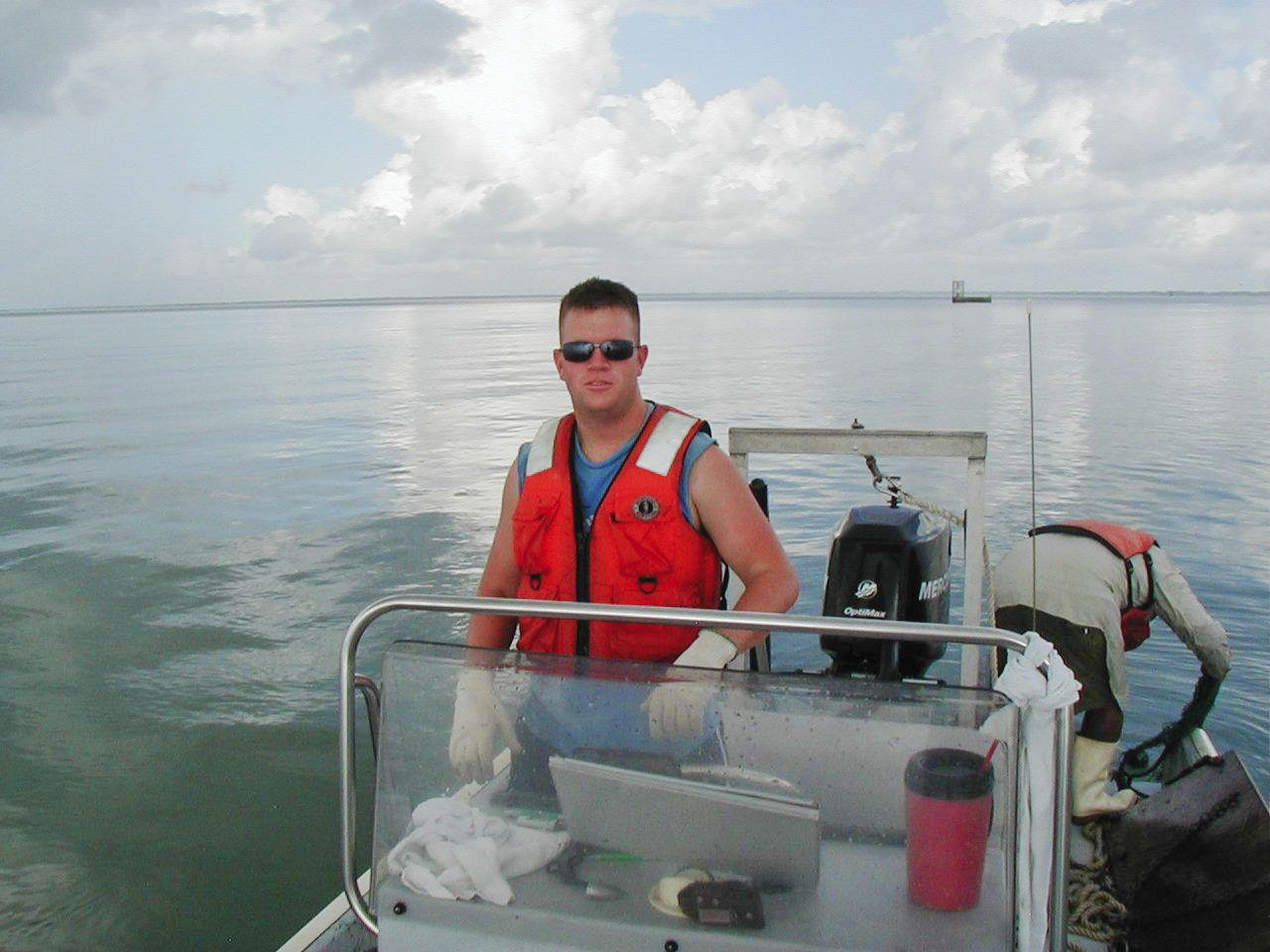 I was in Marine Ecology class one morning when my professor approached me afterward and invited me into his office. He asked me if I was interested in a summer internship with the Coastal Fisheries Division of the Texas Parks and Wildlife Department (TPWD). Without hesitation, I expressed my enthusiasm and fortunately, one month after completing the application, I got a call for an interview. I had been told that this was going to be a formal TPWD interview, so I was nervous for the few days leading up to it. When I walked in the door, I was like a deer in headlights. Facing me were three ecosystem leaders who took turns asking me questions. Apparently my interview went well as I was offered the position at the Rockport Marine Lab. The interview process turned out to be the first of many valuable experiences I have had as a Coastal Conservation Association (CCA) sponsored summer intern.

I've always loved being on the water, so it was a dream come true to spend the summer working on two Texas coastal bays. Before this internship, I had very little experience on boats. During the internship, I spent anywhere from 10 to 20 hours per week on the water. For instance, on my first day of work, we went to Mud Island to collect a couple of bag seine samples and a trawl sample. Just before sunset, we cut across Aransas Bay and into Copano Bay to set two gill nets on the south shore.

The TPWD Rockport Marine Lab houses two bay system crews. During the summer, I rotated between the Aransas Bay and Corpus Christi Bay crews. They use skiffs for shallow water sampling and larger research vessels (R/V's) for bay and gulf sampling. The skiffs are powered with 150 h.p. outboard motors and are all about 21 feet long. The R/V's are modified shrimp boats which have been rigged for research purposes. The R/V Copano Bay is about 35 feet long and is used exclusively for inshore trawling and dredging oyster reefs in the bays of the Aransas Bay ecosystem. Corpus Christi Bay ecosystem has the larger R/V Nueces Bay (about 54 feet long) which trawls both in Corpus Christi Bay and the Gulf of Mexico and conducts long-line sampling for sharks offshore in the Gulf.

One of the more valuable lessons I learned was that weather plays a significant role in field sampling. Occasionally, it was better to wait and collect data another day rather than try to fight the weather. For instance, we had planned to go 'long-lining' for sharks. The prediction was for 2 to 3-foot seas, so we expected a nice day out on the Gulf. However, when we made it to the end of the Port Aransas jetties we encountered 6-foot. waves. The bow was pitching so far up and down it felt like I was floating out of my seat! It was so rough and choppy that we had to call the trip off.

There were days where work didn't require being on the water. The lab in Rockport is where we worked up all the samples that were brought in from the field, as well as cleaned up the recorded field data and entered the information into the computers. Learning about data input helped me understand why "they do what they do" in the field. This summer, I learned how the TPWD utilizes fisheries data to suggest regulations (such as size and bag limits on fish) to conserve our valuable resources. In fact, working with this much data was a real challenge for me. I had no idea there were this many different species of fish and crabs in our bay systems. However, since I spent the summer at Rockport Marine Lab, I have learned how to identify aquatic organisms down to genus and species using scientific keys.

Outside of the data and scientific part of the job, there was a lot that had to be done to maintain the vessels and the gear. I have learned how to rig trawls, dredges, and long line equipment. Each one of these has their own set of ropes, pulleys and winches. This was a little intimidating at first, but it soon added to the fun. I have also learned how to change the oil in large marine diesels and perform basic checks on the R/V's as well as the outboard motors.

The experience that has affected me the most is the people behind the scenes. All of the technicians, biologists, and other TPWD employees I have worked with have shown me what it's like to really work hands-on in the field. I believe this has been the most beneficial summer during my college career. The lessons I've learned while working at the Rockport Marine Lab have really brought to light a lot of what I studied in school. I really appreciate the opportunity Dr. McKee presented to me and the staff of the TPWD Rockport Marine Lab for teaching me what it's all about to work in this field. I also would like to thank the CCA for sponsoring my internship and making this possible for me.