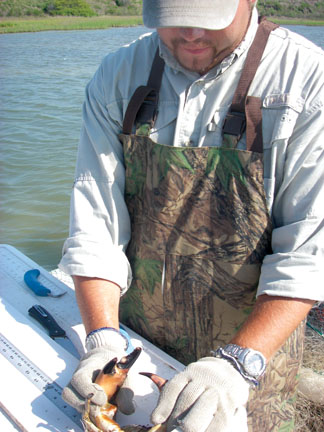 I pushed the alarm button off on the clock. 5:30 am. I had not slept much. Mostly out of anticipation and excitement of what we were going to catch in our gill nets.

With my degree in fisheries from South Dakota State I had recently applied for several vacant positions with the Texas Parks and Wildlife Department. As a youth, I had spent several memorable summers in the Corpus Christi area, so I was very interested in the Fish and Wildlife Technician position with the Aransas Bay Ecosystem team. I was very excited when I was called for an interview, and even more so, about a month later, when I was offered a job.

Now, my second day on the job, I was going to pick up three six-hundred-foot gill nets we set the night before. These net sets are a part of the spring and fall adult finfish resource sampling program conducted in each of the eight bay systems across the coast. There is no other program in the country with a 35-year data set of high quality sampling procedures. And now I was part of it.

After unloading yesterday's bag seine samples and loading ice chests, we headed for the ramp. Technicians Moises and Luis talked non-stop telling me about the many things they loved about the job. They had chosen the set locations from a list of 45 randomly selected sites throughout the bay system for this spring season. They had chosen that days sites to get a little wind protection from the ever-strong southeast breeze.

My freshwater boating experience faired me well when I was given the helm of the 21-foot boat powered by a 150 hp outboard motor. Despite the presence of a GPS unit, I was given excellent verbal guidance around crab trap floats, across oyster reefs and other potential marine hazards. The sun rose bright and red and it was a beautiful morning.

As we reached the upper reaches of St. Charles Bay, I caught glimpses of the floats on the first net. It stretched 600-feet perpendicular to shore, with a few white bullet floats every couple hundred feet to identify it as ours and to warn boaters. Game Wardens had been notified of the net location yesterday.

We tied up at the deep end of the net. We gathered and recorded the required water and weather data. I could see where several sections of the float line had been pulled below the water surface. I could hardly wait to see what we had caught.

The net had been set with the large mesh (6-inch mesh) panel (150 feet) away from shore. I could see the dorsal fins of several very large fish surfacing and then disappearing. Near the boat I saw what looked like catfish, and gizzard shad, very similar to my freshwater friends.

I was glad to hear that the rookie was required to take fish out of the net, rather than record data. I had time to learn data recording, but I was very eager to get my hands on some saltwater fish. The nylon gloves protected my hands from spines, scales and raspy teeth.

The larger mesh caught the larger fish. Luis and I pulled in several feet of netting and removed the entangled fish. Three beautiful red drum were over 24 inches in length. Moises recorded their length and they were released alive. I was somewhat slow in removing the lively hardhead catfish, with their large spines. The prehistoric looking alligator gar, all 5 feet of him, was the most awesome catch. The tooth-filled elongated snout, the rock-hard diamond shaped scales, and the abundance of slime coating this fish made it very difficult to remove.

We made our way through each of the next 150-feet sections of 5-, 4-, and 3-inch stretch mesh. As each organism, including crabs, jelly fish, and fish, was removed, we identified, measured and recorded data. The shoreline anchor of the 3-inch stretch mesh panel was removed. It had taken us abut an hour to remove the 76 fish from the entire net.

We drifted back to deep water and made our way a mile down the shore to the second net. Gizzard shad and menhaden dominated the catch here, with a few spotted seatrout, and of course, a few of St. Charles Bay's famous alligator gar. By the time we finished picking up the third net over 2 hours later, I had my fill of fish removal. Next trip I will see if I can record the data.

Back at the lab, we cleaned our gear and boat and prepared it for the setting of the last two nets for the week. Jason and Faye were going to set these nets, and I was eagerly looking forward to the pick up again. Data sheets were checked and double checked. Summaries were prepared. One week of the 10-week spring netting season was almost over.

When I got home, I realized I smelled a little like fish, I was tired and my hands were sore, but still thinking about all of the unusual fish that we had caught. I knew that I had landed a job with a great crew, a great program, and that I was going to enjoy every day helping manage the fishes of Aransas Bay.