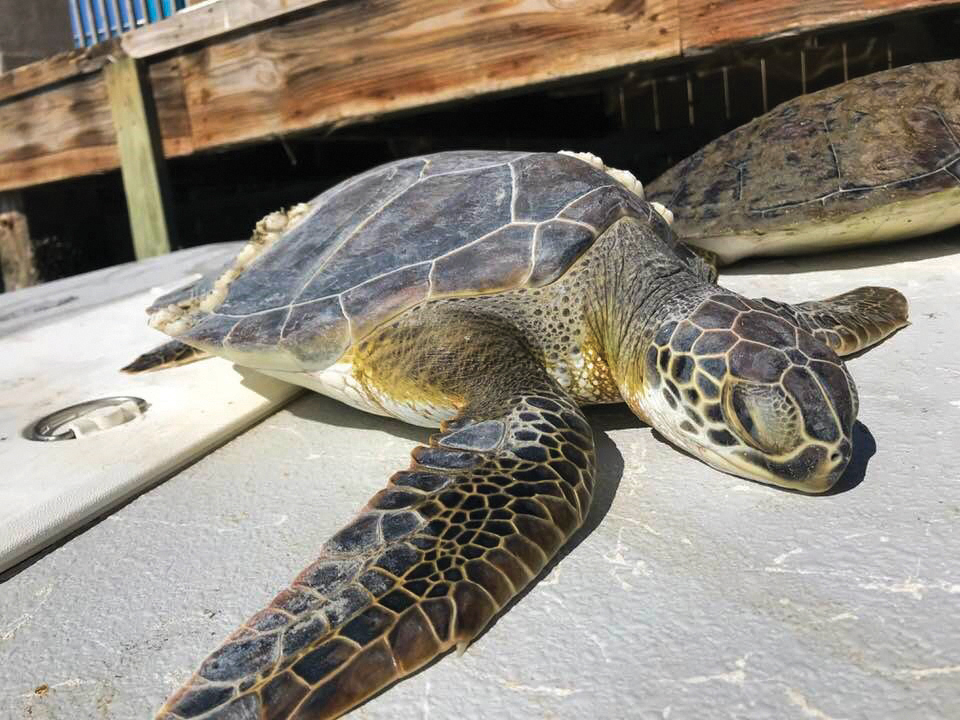 It was the first day back at work after the holiday break in January 2018. We all knew it wasn’t going to be a day at the office keeping warm as the outdoor temperature dropped to 34° F (1° C) that morning. Instead, Texas Parks and Wildlife Department (TPWD) staff coastwide were gearing up their boats preparing for cold-stunned sea turtle patrol out in the bay, unaware that the winter would cause the largest cold stunning event recorded in Texas since 1980.

Numerous volunteers, non-profit organizations, and federal and state agencies, all with the common interest for conserving our threatened and endangered sea turtles are responsible for these rescues. TPWD is one of these partners and monitors water temperatures closely during severe weather to determine whether cold-stunned sea turtles should be expected. If so, staff are deployed by boat and foot to survey all eight bay systems along the coast and aid with rescues.

The majority of cold-stunned sea turtles found in the lower Laguna Madre (LLM) gather along the southern shorelines due to strong northers, on spoil islands, or between the jetties of the gulf passes. Rescue efforts consist of a diligent search of anything resembling a sea turtle’s carapace (shell) floating on the surface of the water or completely submerged in shallow waters. Once a sea turtle is spotted, it is safely pulled out of the water by its carapace and securely placed on the boat. Depending on the size of the sea turtle, this can be a one to two-person job. Afterwards, the sea turtles are transported to a nearby holding or rehabilitation facility for treatment.

In the LLM, Sea Turtle Inc. is the primary rehabilitation facility, but there are others serving the rest of the coast including the Padre Island National Seashore Sea Turtle Science and Recovery Laboratory in Corpus Christi and the Amos Rehabilitation Keep (ARK) in Port Aransas. A suite of data is collected and recorded for each sea turtle at these facilities. Carapace measurements, injuries, and abnormalities are documented. A Passive Integrated Transponder (PIT) tag - if not detected on the sea turtle – is injected under the skin of the front, left flipper. All sea turtles go through this process and are kept indoors until released in warmer water.

The cost of resources for a successful cold-stunned sea turtle rescue can be hefty. One way these rescues are supported is through the Natural Resource Damage Assessment (NRDA) funded Sea Turtle Early Restoration Project. One component of this project aims to enhance STSSN and develop an Emergency Response Program for such cold stunning events. Texas was awarded $19,965,000 for this specific project and it is one of the many restoration projects supported with NRDA funds received from the Deepwater Horizon oil spill settlement in an effort to compensate for lost natural resources.

A big THANK YOU! goes to our network of volunteers that play an integral role in cold-stunned sea turtle rescues. It’s a good thing to know that a permit is required to handle threatened and endangered species like the sea turtle. However, volunteers and individuals who find stunned sea turtles can be deputized under a “Good Samaritan” act, to handle and transport them to a rehabilitation facility.

With a large area to survey and limited resources, volunteers, including recreational anglers who are on the water, provide much needed help during these events. Anglers who have access to an airboat are especially needed to assist with shallow water rescues, as these areas are the most difficult to reach. If you are interested in volunteering for the next cold stunned event, I encourage you to contact your local sea turtle rehabilitation facility for more information. Finally, should you ever encounter a stranded sea turtle, call 1-866-TURTLE5 to report it, with a GPS location if possible, and to receive instructions on how to assess the situation.

The biggest reward during the cold stun event of 2018 was witnessing the end result of teamwork from the entire coastal community as hundreds of rescued sea turtles were returned back to their habitat. It is truly inspiring what people can conserve when we come together.