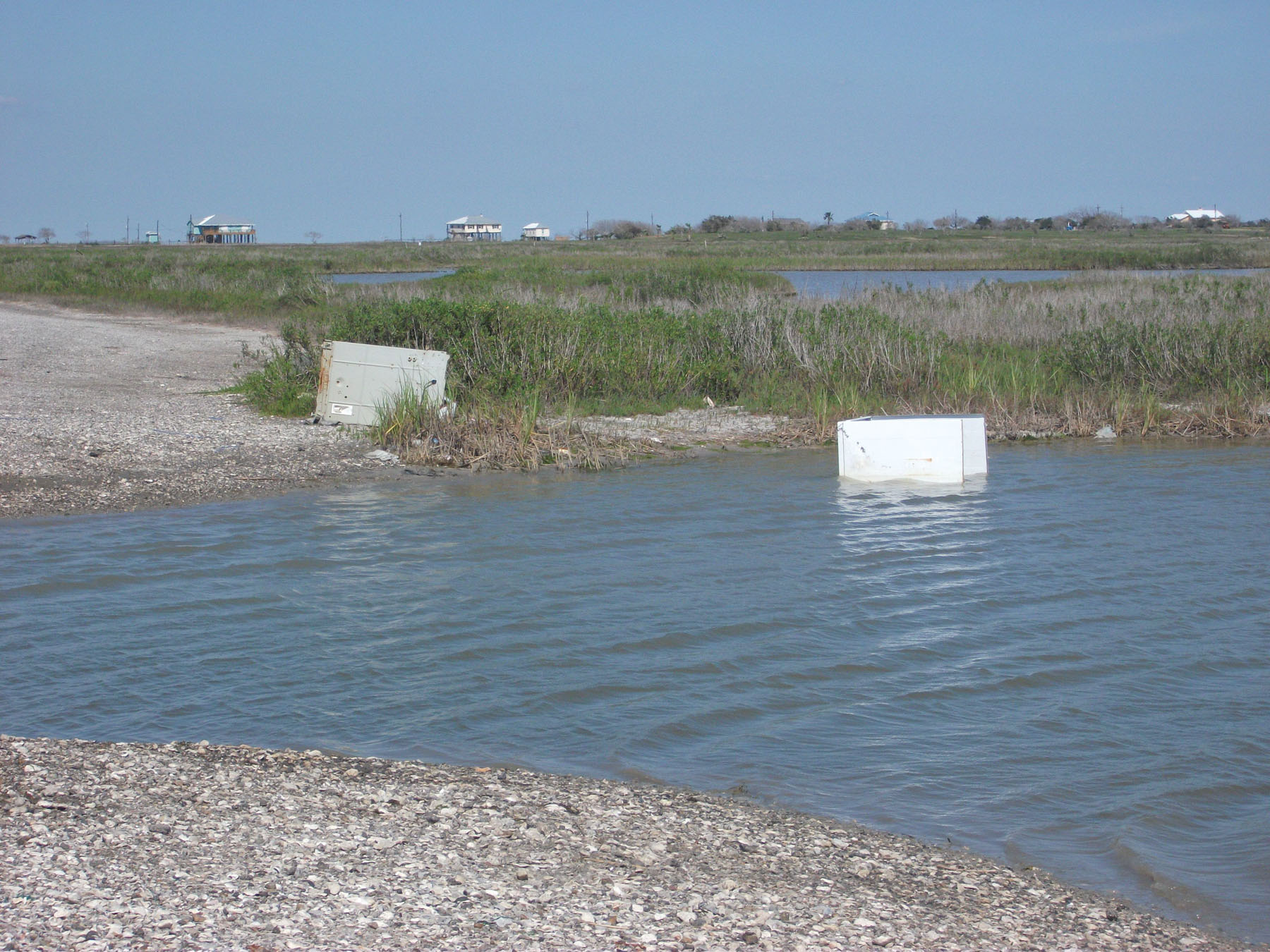 No washing machines in MY marsh!

A washing machine in the marsh!

A washing machine in MY marsh!

As I drove north on highway FM 136 toward Bayside, I became aware of the washing machines that had be dumped along the highway right-of-way. These two white hulks were the crowning blow of litter that already scarred the roadside and had blown into the marsh vegetation: beer cans, beer bottles, plastic bags, plastic plates, cups, food wrappers, lumber, diapers, tires and so much more.

These eye sores on the beauty of the marsh disturbed me. I volunteer at the Welder Wildlife Foundation in Sinton. I tend the sea life at the Aquarium at Rockport Harbor. I volunteer at the ARK at University of Texas Marine Science Institute in Port Aransas in caring for injured wildlife. I am a Texas Master Naturalist. I love this earth and its creatures. I had to take action.

I began researching the area of Egery Flats. I talked to my neighbors and friends. I talked to my colleagues where I work and volunteer. I made phone calls. I wrote letters. I contacted city, county, state and federal agencies and non-government conservation groups that I thought could help solve the problem of habitat abuse at Egery Flats. I might have even written the Texas governor. I have heard my friends call this "Lillie's Crusade."

Egery Flats is located in Aransas County on the east side of highway FM 136 just before the highway crosses the bridge and enters Refugio County. The Flats are part of the complex estuarine marsh created by the Aransas River delta where it enters southwest Copano Bay. A variety of different landowners own the Flats and adjacent lands on either side of the highway. Egery Flats is a tidally influenced shallow marsh with dense cordgrass along its perimeter and the islands throughout its rich mud bottom. It serves as a nursery ground for shrimp and larval fish and harbors an abundance of resident shorebirds as well as flocks of migratory birds.

Despite many existing laws, many users of this remote stretch of narrow highway have abused the natural esthetics of the area by littering, habitat destruction, and taking shrimp illegally.

My letters and phone calls have been successful. The first organized litter pickup in 2010 resulted in over 9,000 pounds of litter being trucked away by Texas Department of Transportation (TxDOT). Master Naturalists have continued to have regular litter pickups.

TxDOT has installed highway barriers along the highway by the culverts to protect persons that continue to access the water's edge. The U.S Fish and Wildlife Service purchased the signs that Texas Parks and Wildlife Department Coastal Fisheries Division installed to remind bay users that taking shrimp from the nursery area is illegal. The Mission Aransas National Estuarine Research Reserve (MA-NERR) Stewardship Committee is installing an informational sign purchased by the Coastal Bend Bays and Estuaries Program.

The collaborative efforts by these and other organizations and many individuals, has made a visible and positive impact to the Egery Flats area. I hope that our awareness and call to action in Egery Flats can be an inspiration to others who care about the environment to take an active role in its stewardship.