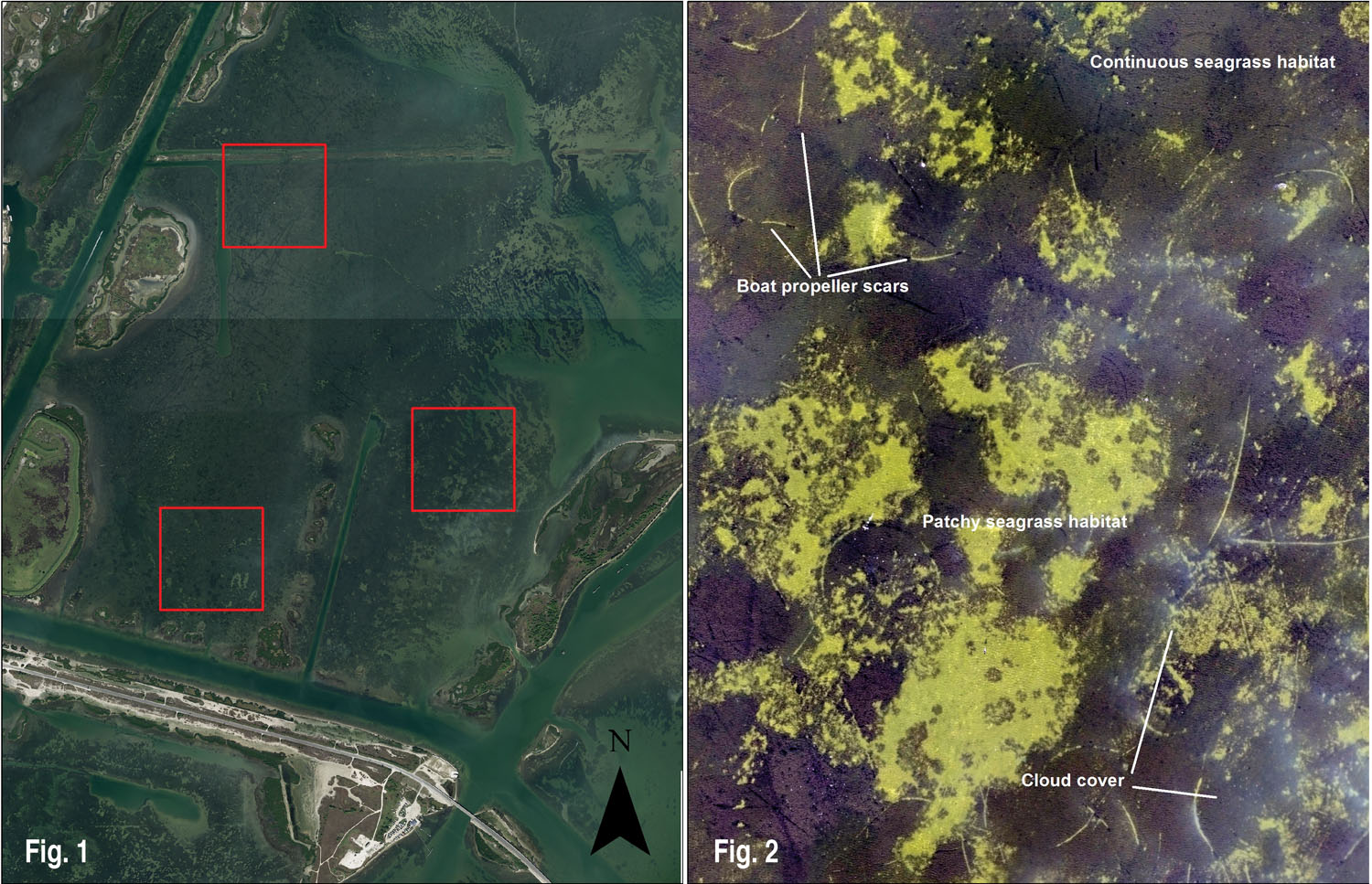 Figure 2. Drone imagery shot in the vicinity of Hog Island in Redfish Bay shows continuous and patchy seagrass habitat.Propeller scars in the seagrass are also readily identified.Note the low hanging cloud cover that slightly obscures the imagery in the lower right hand corner.

It’s a crisp and cool January morning on Redfish Bay. Tides are seasonably low (about a foot below normal) and, on the tail end of a mild norther, the winds have been calm for days. The bay is like glass as our skiff runs along the deep edge of an old access channel. The seagrass below almost seems magnified by the unbroken stillness of the water’s surface. We come off plane to anchor in a secluded cove where a group of wintering redhead ducks eye us suspiciously then glide to deeper water. And now we wait.Months of planning, coordination, and waiting for the right weather conditions have brought us to this moment. When you’re studying seagrass, its days like today that you wait for. And so we wait.

Texas Parks and Wildlife Department (TPWD) has monitored fish and invertebrate (shrimp and crabs) populations in Texas bays for decades. In fact, starting in the mid-1970s, the Department began one of the most extensive, continuously running fisheries datasets in the world. Over the last forty years, TPWD field staff from Sabine Lake to the Laguna Madre have braved Texas bays and the nearshore Gulf to set scientifically calibrated gill nets, trawls, bag seines, and dredges to count, measure, and examine millions of marine organisms.It’s these counts and measurements that have guided regulation and decision making regarding our fisheries resources and will continue to do so in the future. But in addition to this fish data, there is another piece of information that fisheries managers worldwide are beginning to recognize as important for maintaining healthy populations.

As an avid fisherman, you probably understand that there are certain areas that tend to congregate fish.Whether it’s tailing red drum on a seagrass flat or cruising spotted seatrout on the edge of a mangrove marsh, fish like certain habitats more than others. So what does that mean for assuring the health of these fish populations? It’s simple, really.Not only do we need to make sure that there’s an adequate number of fish in the water, but also, that there is adequate habitat. And when I say that this is “simple,” I mean that in concept, not practice. Texas bays and nearshore Gulf encompass approximately 4 million acres with habitat types as diverse as the coast itself (think Sabine Lake versus Baffin Bay) and capturing information such as spatial extent and coverage of these habitat types on such a large scale has always been a challenge. Not to mention the potential for these habitats to change over time and the need to collect this information regularly.

That brings us back to Redfish Bay. Over the past couple years, TPWD biologists have been capturing aerial imagery from manned aircraft to assess changes in propeller scarring in four areas of the Texas coast as a regulation was passed during the 83rd Legislative Session prohibiting the uprooting of seagrass coastwide. But today we are trialing a new tool for acquiring such imagery: drones. While drone technology does not yet allow us to capture aerial imagery to the extent of manned aircraft, its rapid deployment time and smaller price tag make it a viable alternative for smaller scale projects. Today we are flying two types of drones (Unmanned Aircraft System - UAS), coordinated with the Lone Star UAS Center for Excellence and Innovation (Texas A&M University Corpus Christi) and their certified pilots.The first drone is a fixed-wing style unmanned aircraft measuring six feet wingtip to wingtip and resembling a large model airplane. The second is a quadcopter with four, helicopter-like rotating blades that allow it to stabilize and hover when necessary. While drone “pilots” man the controls for take-off and landing, once in the sky, the aircrafts will orient to pre-programmed GPS coordinates and fly transects across the Redfish Bay study area (Figure 1).Each drone carries a highly sensitive camera that will snap pictures of the bay bottom at regular intervals during flight. What we don’t know is how the quality of this drone imagery, shot at low altitude, will compare to the high-altitude imagery shot by manned aircraft. Cloud cover, fog, sunlight reflecting off the bay surface; it’s all about logistics. That’s why we’re here on a clear, calm day.

And so we wait.Our drone operators have set up a base of operation to the side of the Redfish Bay Causeway and deployed the first of the aircraft.The sound is barely perceptible; an insect-like humming in the distance. Then we see it.It’s the quadcopter and its movement through the sky is amazingly intentional, as if it’s being guided by an unseen tow line. We watch the aircraft come to the end of its line, pause briefly, jump to the adjacent transect, and move back in the direction it came, all the while shooting and storing images of the bay. The second, fixed wing, drone was deployed a few hours later all while a manned aircraft soared far above capturing the same images.

With data captured, months of work lay ahead that will consist of digitally stitching these hundreds of images together into one picture of Redfish Bay and digitally comparing the images captured by the manned aircraft and the drones. This particular imagery will be specifically used to examine the extent and change in boat propeller scarring on the seagrass beds of Redfish Bay and further to quantify the extent of seagrass coverage in this system (Figure 2).In conjunction with the years of fisheries data collected by TPWD field staff, habitat information such as this will allow us to better foresee trends in habitat loss that have the potential to impact fish populations. And so we will wait, and plan, and watch for calm, clear days that give us the opportunity to glimpse the underwater world from the sky.To better understand the habitat of marine fish and invertebrates and to protect this fragile habitat.

Next month Nathan Kuhn will expand on this seagrass theme with information about common seagrass species found on the Texas coast.