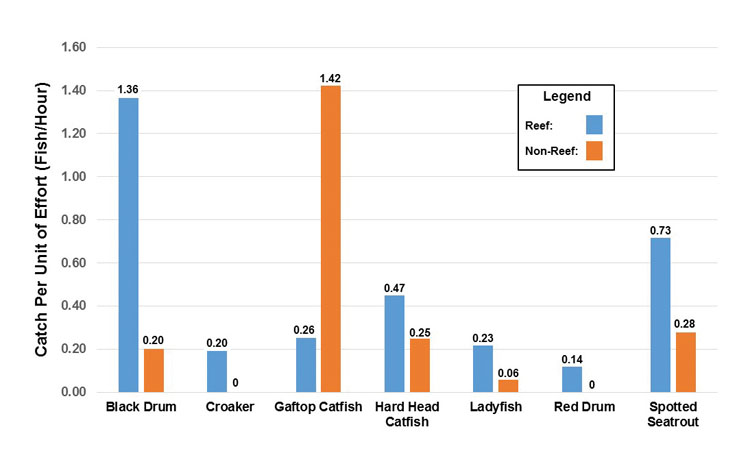 A fisherman standing on the deck of a boat might perceive East Galveston Bay as a wide expanse of open water, but to a hungry fish foraging along the bay bottom the view is quite different. It sees a landscape characterized by vast stretches of muddy bottom occasionally punctuated by oyster reefs. This ubiquitous muddy bottom is relatively a food desert, and our hypothetical fish predator likely greets the oasis of a prey-rich oyster reef with hungry enthusiasm. If our hungry fish is lucky enough to encounter one of the reefs restored by TPWD and its partners in East Galveston Bay in 2014 then chances are it will stick around to sample the numerous offerings that this benthic buffet has to offer.

Like their tropical coral counterparts, oyster reefs host a diverse assemblage of fish and invertebrate species within their many nooks and crannies (Figure 1). Some of these creatures are permanently attached to the reef structure, while others prowl the cracks and crevices between the live oysters and dead shell that together form the reef matrix. All of these critters eat and are in turn eaten by something, making oyster reefs an important part of the Bay's food web. Oysters feed by filtering tiny organisms called phytoplankton from the water thus making them important in maintaining water quality and clarity. Unlike their tropical counterparts, however, oysters do not inhabit gin-clear waters and are not easily filmed for TV nature documentaries. For this reason oyster reefs are not as well understood or appreciated as coral reefs and this "PR problem" has been one of many factors in their decline. A recent scientific study found that 85% of oyster reefs have been destroyed or seriously degraded globally. Galveston Bay's oyster reefs have mirrored this decline. Hurricane Ike's storm surge alone was estimated to have damaged or destroyed at least 50% of the Bay's reefs. The damage was particularly bad in East Bay where an estimated 75% of reefs were impacted. However, TPWD oyster dredge survey data indicate that oyster abundance was declining in the Bay well before the storm. A period of prolonged drought associated with La Nina caused less fresh water to reach our coastal bays. This resulted in higher than average salinity levels that favored high rates of disease and predation in oyster populations. These natural stressors were exacerbated by a high demand for water and for oysters by human populations. Adding hurricane Ike to this scenario resulted in a "perfect storm" for oyster habitat degradation.

To address this issue, Texas Parks and Wildlife Department's Coastal Fisheries Division began actively mapping and restoring oyster habitat in Galveston Bay and other Texas bays in 2007. The 2014 East Bay Oyster Restoration Project is the most recent oyster reef restoration project to be completed under this effort. The project, a partnership between TPWD and CCA Texas, is the largest oyster restoration project to have been completed in Texas to date. Funded through a $3.18 million grant from the Texas General Land Office's Coastal Impacts Assessment Program (CIAP), the project originally sought to restore 130 acres of oyster reef. As the project gained momentum, additional funds became available including $850 thousand from The National Fish and Wildlife Foundation's Gulf Environmental Benefits Fund and $500 thousand from CCA Texas. The resulting $4.96 million budget was mostly used to purchase nearly 73,000 cubic yards of river rock "cultch" and spread it over 180 acres of degraded oyster reef at 5 sites on 3 major oyster reef systems in East Bay. These reef systems included Hanna's Reef (85 acres), Middle Reef (25 acres) and Pepper Grove (70 acres). These sites were closed to commercial fishing for 2 years to allow for colonization by oysters and other reef organisms. In addition to restoring oyster reefs, the East Bay Oyster Restoration Project also funded an engineering study to evaluate various alternative oyster restoration methods suitable for areas too deeply buried by storm surge sediments for traditional oyster cultch planting methods to work. The project also funded an educational module developed by Texas A&M Galveston's Sea Camp program that has taught more than 800 Galveston County elementary school children about oyster reef ecology and the many benefits of reef conservation and restoration.

To measure the results of these restoration efforts, TPWD biologists have been monitoring the East Bay Oyster Restoration Project for oyster population growth and fish utilization. They have documented that oysters began growing on the rocks in high densities in the months following the cultch placement on the reefs. They also found that the reefs are being utilized by a diverse group of fish species including spotted seatrout, redfish, sand trout and black drum. The monitoring of the reefs is ongoing but the preliminary results so far support the "field of dreams hypothesis" that if you build it in Texas, they will indeed come.