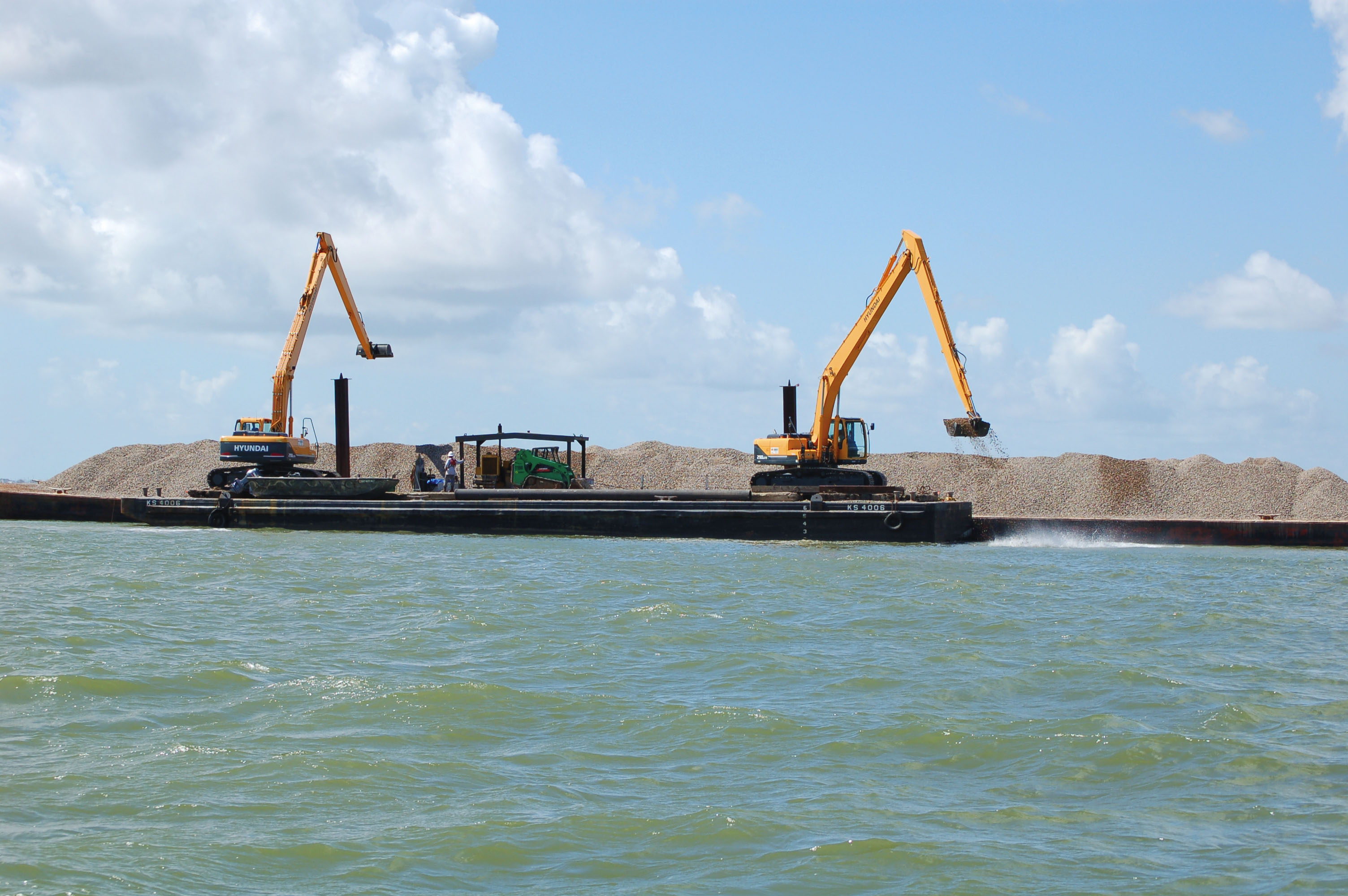 Hurricane Ike made landfall September 13, 2008 on the upper Texas coast. Visible damage was apparent everywhere. Over 80% of the homes on Bolivar Peninsula were destroyed, windows were blown out of downtown Houston office buildings, boats, vehicles and debris were scattered everywhere, and 34 people died in Texas.

Damage to the natural resources was just as catastrophic. Galveston Bay was filled with 12 feet of water from tidal surges, depositing tons of debris and sediment into the bay covering and killing ecologically and historically important oyster reefs.
In the US, the Eastern Oyster (Crassostrea virginica) range from Maine to Texas and oyster reefs are an important part of any bay ecosystem. A single oyster can filter 50 gallons of water in one day, allowing for improved water clarification and water quality. Using this rate, at a minimum density of 10 oysters per square meter, 130 acres of reef would be capable of filtering approximately 260 million gallons of water per day. By comparison, in 2009, the city of Houston's 39 wastewater treatment plants had a combined average daily wastewater treatment flow of 252 million gallons per day (Greater Houston Partnership, http://www.houston.org/economic-development/facts-figures/utilities/index.aspx). Oyster reefs also provide habitat for vertebrates and invertebrates and are ideal destinations for recreational harvest of fish such as red drum, spotted seatrout, and black drum.
Oysters in Texas have been harvested as far back as the 17th century (Karankawa Indians). Number of oysters harvested and overall reef sizes have been on a decline for decades for many reasons, including overfishing, shell mining, disease, silt overburden, extended times of flooding, and drought conditions.
Texas Parks & Wildlife Department (TPWD) Oyster Restoration Program has staff and equipment dedicated to mapping the bay bottom with side scan sonar. Images were recorded in Galveston Bay prior to Hurricane Ike and after landfall. These data show that 60% of reefs in Galveston Bay and 80% of reefs in East Galveston Bay (8,000 total acres) were either damaged or destroyed by sediment deposition over the reefs. East Galveston Bay was closed to commercial oyster fishing November 2009 until November 2011 to allow oyster reefs time to recover from hurricane damage and allow TPWD time to conduct oyster restoration activities.
The goal of oyster restoration is to provide a hard substrate (referred to as cultch), upon which the free swimming oyster larvae will attach, grow and help repopulate the reefs. The preferred cultch material is oyster shell, but demand for oyster shell for other purposes has made its use in restoration cost prohibitive. Materials used today include limestone, river rock, or clean crushed concrete.
Reef restoration work in Texas goes back to the 1940s, but the first large scale cultch planting took place in East Galveston Bay in September 2008. This type of reef restoration has been used for years along the Gulf and mid-Atlantic coasts, though it is a very expensive endeavor.
In 2009, TPWD received a $7 million National Oceanic and Atmospheric Administration grant for fishery disaster relief due to Hurricane Ike. Portions of the money were used to restore damaged oyster reefs in Galveston Bay.
Sub-bottom profile surveys were conducted by Texas A&M University at Galveston to determine sediment depths over the oyster reefs. Detailed maps showing sediment depths were used to determine which reefs were better suited for bagless oyster dredging (less than 6 inches of sediment) and which reefs were better suited for cultch plantings (greater than 6 inches). Areas in central Galveston Bay had the least amount of sediment overburden while reefs in East Galveston Bay had the most. Some reefs of East Bay were buried with over 12 inches of sediment.
Hurricane Ike restoration work was divided into two phases - bagless dredging and cultch plantings. Both phases were timed to take advantage of the summer/fall larvae set.
Phase one began in June 2010 and ended in October 2010. TPWD hired commercial oyster fishermen from the Galveston Bay area who held oyster licenses and had verified oyster landings prior to the hurricane to pull bagless oyster dredges across designated reefs depositing the hard shell back on top of the silt. Several hundred applications were received, and one hundred sixty-six boats were utilized during five months. On average 1-2 reefs were restored each week and depending on the size of the reefs, anywhere from 5-50 boats worked each day.
Over the five month period 819 "boat days" resulted in the restoration of approximately 1,104 acres of oyster habitat at a cost of $740 per acre.
The second phase entailed hiring a contractor to place cultch material (river rock) on reefs that were covered in deeper sediment. Restoration work began in 2010 when permit applications were submitted to the US Army Corps of Engineers and surface lease applications were submitted to the Texas General Land Office. Upon receipt of permits and leases, solicitation of competitive bids for the cultch planting were received and finalized in spring 2011.
Over 56,760 cubic yards of river rock were "planted" on 139 acres of reef in Galveston Bay and East Galveston Bay during the summer of 2011 at a cost of $3,106,513 or approximately $22,000 per acre.
The oyster restoration team will monitor these sites for the next two years to determine the level of success of the two restoration techniques.
To learn more about oyster restoration, please visit the Texas Parks & Wildlife page on YouTube .com