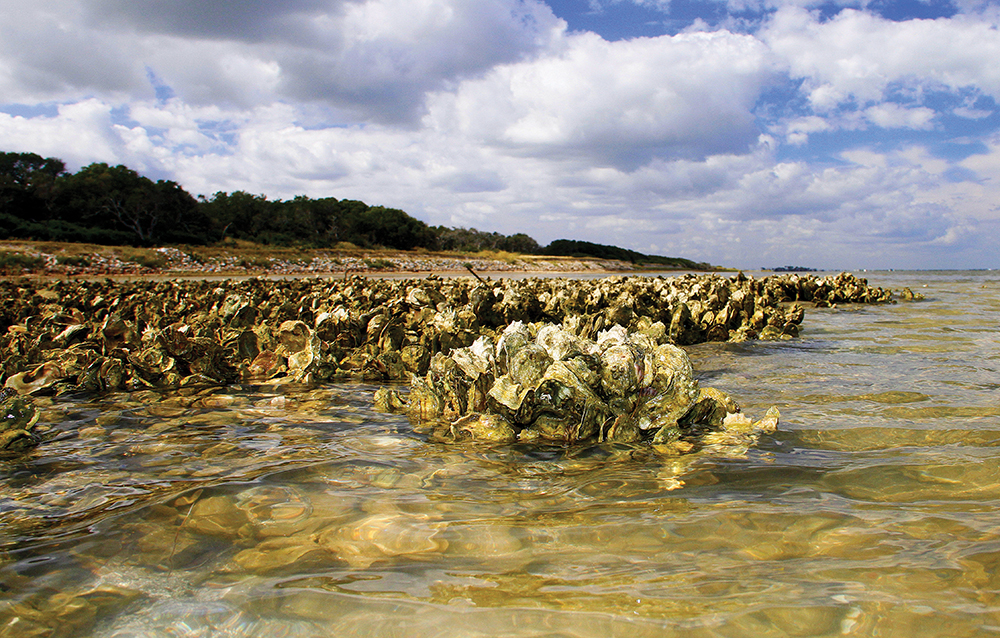 There are a wide variety of mollusk species found in Texas estuarine waters. Most of these species occur as single animals, but where there is little hard bottom, oysters typically grow as consolidated reefs providing important habitat for a variety of other marine organisms. Over 300 different marine aquatic species have been identified that use oyster reefs for habitat, refuge, and food.

Besides providing important habitat in Texas’ bays and estuaries, oysters are among the few animals that people still eat alive and raw. Oysters support a valuable commercial fishery in Texas, being harvested from public reefs (22,760 acres) and private oyster leases (2,321 acres). Though oysters can be found in most Texas bay systems, over 90% of the public reef areas utilized by commercial and recreational fishermen are found in Galveston, Matagorda and San Antonio Bays -- bay systems with good freshwater inflows. All the oyster leases occur in Galveston Bay.

Commercial landings in 2000 exceeded 3.5 million pounds of meat with a dock-side value of over $20.4 million. The public commercial oyster season runs from November 1 through April 30 coastwide. Recreational harvest is allowed during this season as well, with a daily bag limit of no more than two sacks (1 sack = 110 pounds) of three inch or larger oysters.

Texas primarily harvests the Eastern oyster, Crassostrea virginica, a shellfish having two shells joined at one end by a hinge and kept closed by the adductor muscle (the dark spots on the inside of an empty shell are the scars where the adductor muscle was attached). The size and condition of the oyster affects the power of the adductor muscle; however, a 3 to 4-inch oyster requires a pull of over 20 pounds to open the shell.

Spawning occurs when waters warm above about 68° F and continues at intervals throughout the summer. Fertilization occurs in the open water and the egg soon develops into a microscopic, free-swimming larva, a stage that lasts about three weeks. Chemical cues given off by bacteria and algae growing on hard surfaces appear to trigger the free-swimming larvae to change shape into a small oyster about the size of a grain of pepper called a spat. Spat will attach themselves to many types of hard material (cultch) but prefer mollusk shells. Oysters can reach sexual maturity in as little as four weeks after attachment, first maturing as males then changing to females after spawning. Alternation of sexes continues throughout life.

Oysters are incredibly resilient. Unable to move to avoid changes in environmental conditions, they have developed a strategy to survive in shallow coastal estuaries. Oysters are capable of surviving extreme changes in the environment for short periods of time. Optimum water temperature for growth, reproduction and survival range from about 68° F to 86° F, however, adult oysters in Texas can survive at temperatures ranging from 28° F to about 97° F. The normal salinity range for oysters is 10 to 30 parts per thousand though they can tolerate salinities as low as 2 ppt and greater than 40 ppt.

Oysters have few predators, however the oyster drill (a snail), blue crabs, and stone crabs are responsible for most of the deaths on oyster reefs. With specialized teeth in their throat that can crush shells, black drum are also known to eat oysters. A protozoan parasite, dermo, has also resulted in major mortalities of oyster reefs in some bay systems in recent years. Oyster drills and dermo require higher salinities to survive, raising concerns over reduced freshwater inflows into Texas’ bays and estuaries.

Oysters are filter-feeders and adult oysters can filter up to fifty gallons of salt water per day. They consume plankton – tiny microscopic plants and animals found in the water - and play an important role in maintaining good water quality in bays and estuaries. This filter method of feeding is also why some areas are closed to the harvest of oysters due to high levels of bacteria in the water. You should check with the Department of State Health Services, Seafood and Aquatic Life Group (www.dshs.texas.gov/seafood/default.aspx) or 800-685-0361 to make sure you are harvesting oysters from approved waters. For more information about oysters or other coastal fisheries you can also contact the local biologist in your bay system (https://tpwd.texas.gov/about/administration-divisions/coastal-fisheries/field-offices).