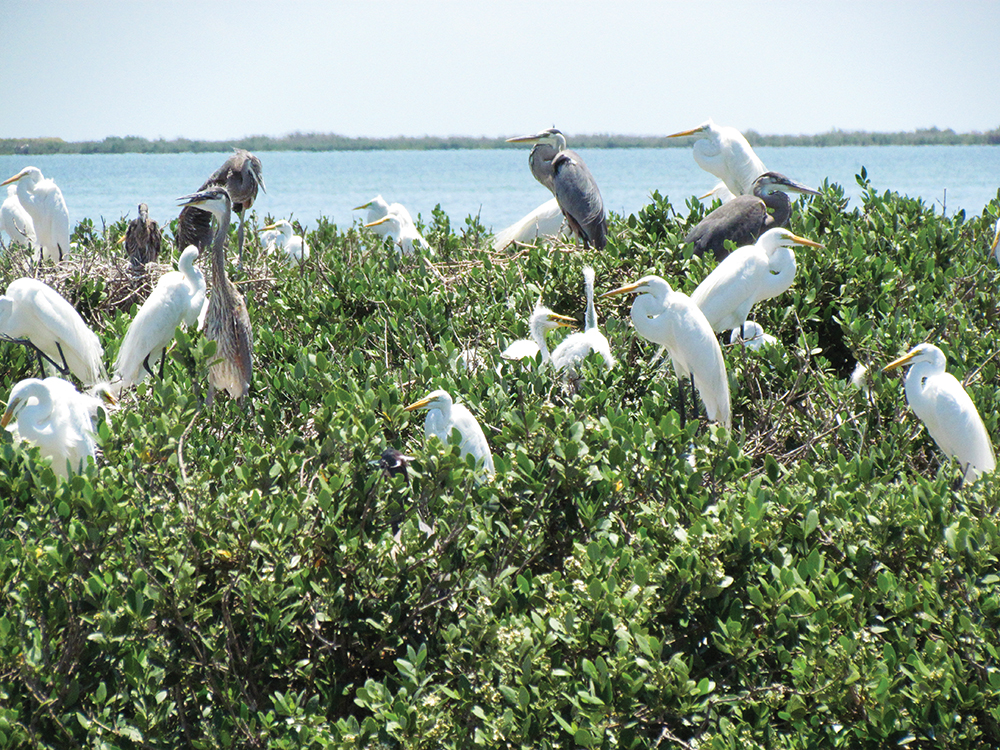 In the spring of 1920, biologist T. Gilbert Pearson set out on the “Jim Duke,” a boat owned and operated by the Texas State Game, Fish, and Oyster Commission (precursor to the Texas Parks & Wildlife Department) to find and document waterbird nesting colonies, or “rookeries.”  Pearson spent weeks travelling through Aransas and Matagorda Bays, eventually heading south to the remote “Laguna de la Madre.”  His report of the journey is one of the first to describe nesting activity on islands we now know as Second Chain, Dunham, Dead Man’s, North and South Bird, and Green.  Pearson observed thousands of pelicans, herons, egrets, spoonbills, and other species nesting practically on top of each other in dense colonies. It must have been an incredible sight for a man who, just 20 years earlier, witnessed the near-extinction of these birds in North America.

In the late 1800s, it became extremely popular in the U.S. and Europe to use plumes, the extravagant breeding feathers found on many waterbird species, to decorate ladies’ hats. The plume trade grew so lucrative that, at one point, plume feathers were worth more than their weight in gold. To meet demand, plume hunters raided rookeries and killed thousands of adult birds with each visit, leaving the eggs and chicks starving and defenseless. By the early 1900s, plume hunters were killing an average of 5 million birds a year, primarily along the Gulf Coast, and nearly a dozen species were on the brink of extinction.  Pearson, who grew up in Florida where he developed a lifelong passion for waterbirds, helped convince President Theodore Roosevelt to issue an executive order in 1903 that established Pelican Island, Florida, as a federal bird reservation, giving birth to the first National Wildlife Refuge in the US.  The rapid designation of four additional National Wildlife Refuges, along with the adoption of the Migratory Bird Treaty Act of 1918, effectively ended plume hunting.

Despite almost a century of protective legislation, waterbirds in Texas still face serious challenges today. Of the 25 species of colonial waterbirds that nest in Texas, over half are experiencing drastic population declines. The number of breeding pairs of black skimmers, for example, has declined by 75% over the past 30 years in Texas. Currently, threats like coastal development, sea level rise, and habitat loss are negatively impacting breeding waterbirds, but one of the most immediate dangers they face is human disturbance. The steady rise in recreational and commercial activity in our coastal waterways increases the chances of bird-human interactions.

February marks the beginning of the annual waterbird nesting season in Texas. Throughout the spring and summer, these birds work diligently to protect, feed, and care for their eggs and young despite exposure to storm events, brutal heat, and relentless winds. With hundreds or even thousands of nests concentrated on each island, it is particularly damaging when a rookery is disturbed. Birds view humans much as they would a raccoon, coyote, or any other dangerous predator. When humans approach too closely, parents flee the nest, leaving eggs and chicks exposed to the intense summer sun and undefended against opportunistic predators like gulls and grackles. Every disturbance is harmful, and even a single disturbance can cause a colony to completely abandon an island and give up reproduction for the year, which can quickly lead to population declines.

Research indicates that ground-nesting species like terns and skimmers are typically more sensitive to disturbance than some of the larger waterbirds, which often nest in shrubs and trees.  Depending on the species, suggested buffer distances around islands range from 50-300 yards.  To ensure you do not violate any of the federal or state laws that protect nesting birds from disturbance, a simple rule to follow is to fish, swim and play from at least 50 yards away. If nesting birds notice you or begin taking flight at any distance, you are too close and should immediately move away from the island.

Nesting activity is not always obvious so it may be difficult to recognize an active rookery.  However, nearly every rookery island on the Texas coast is posted with yellow signs that identify the island as a rookery and restrict access during the breeding season, which runs from February to August each year. When you see these signs, be sure to keep your distance and give the colony plenty of space. It is also imperative to keep dogs and other pets off rookery islands and to be mindful when wind or kite-surfing (imagine how scary a kite flying overhead looks to a bird!). Since each disturbance can have drastic consequences for a colony, simply staying at least 50 yards away during the February to August breeding season can greatly improve nesting success.

The plume trade ended over a century ago, but it is more important than ever that we protect our colonial waterbird populations. These species are an integral part of life on the Texas coast.  They fill critical ecological roles in coastal ecosystems and help bring in millions of dollars a year to the Texas eco-tourism industry.  Anglers, boaters, and paddlers can have some of the most significant, positive, and immediate impacts on nesting colonial waterbirds by helping spread the message to fish, swim, and play from 50 yards away.