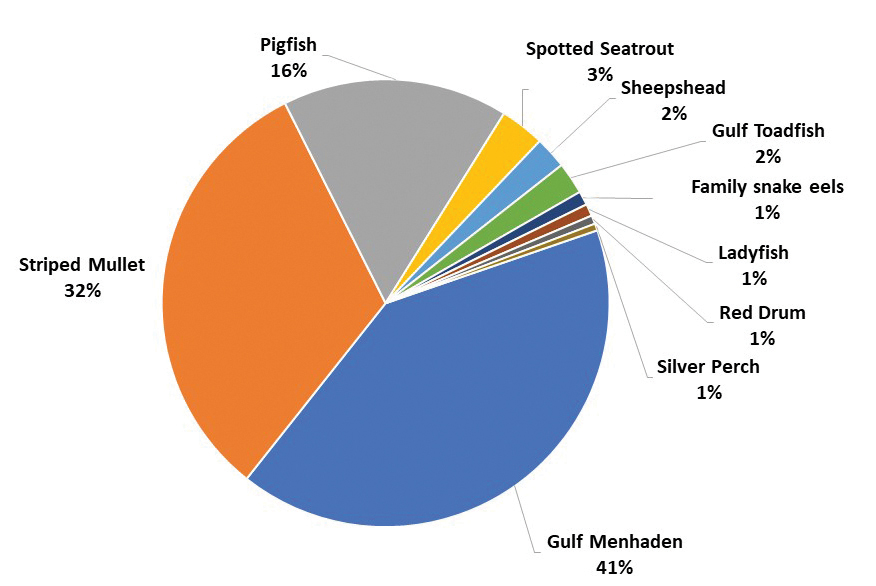 Proportions for the ten predominant species reported in fish kill assessments during the 2011 red tide event in the Lower Laguna Madre.

The Texas Parks & Wildlife Department (TPWD) Coastal Fisheries Division manages the marine fisheries of Texas, about four million acres of saltwater, including all Texas bays and estuaries and the Gulf of Mexico out to nine nautical miles offshore. In most instances, fisheries management strategies are directly linked to fishing pressure from both recreational and commercial fishing. However, Mother Nature sometimes throws unforeseen, harmful, and destructive events our way in the form of natural disasters or extreme weather patterns. Events such as hurricanes, unexpected freezes, and red tide events all require adaptive management strategies to ensure fish populations remain healthy. TPWD Coastal Fisheries does just that by ensuring sustainable populations of commercially and recreationally important species throughout our coast, including two of our most sought-after recreational species, Red Drum and Spotted Seatrout.  One type of natural stressor that has recently impacted these species in the Lower Laguna Madre (LLM) ecosystem are red tide events.

The Texas coast has a long history of red tide events since the 1900s. Most people living along the coast have a good grasp of what a red tide event is and the effects it has on public health and our natural resources.  Texas red tides are caused by Karenia brevis, a microscopic, single-celled algae specifically identified as a dinoflagellate that produces a neurotoxin called brevetoxin. Due to the fragile cell covering of K. brevis, it can be easily broken by wind and wave action. Once the toxin is released, it can be detrimental to fish, marine mammals, shorebirds, and humans. On beaches, the toxic aerosols can cause respiratory irritation in humans and in water, expansive blooms of K. brevis can deplete dissolved oxygen during the day and kill fish by affecting their central nervous system and halting gill function.

Thanks to partners such as Texas Sea Grant’s Red Tide Rangers, TPWD Coastal Fisheries can monitor K. brevis cell counts in the LLM. This data provides helpful information for public safety, fish and shellfish consumption advisories, and aids with identifying the stage of the bloom so that our constituents are kept updated.

In a current study being conducted by Coastal Fisheries, biologists are looking into the potential negative impacts of K. brevis on the abundances of juvenile Red Drum and Spotted Seatrout in the LLM from two prolonged red tide events in 2011 and 2015. Previous studies have shown harmful effects of red tide on Red Drum larvae even at low cell concentrations. Because red tide blooms often coincide with Spotted Seatrout and Red Drum spawning seasons, the current study aims to determine how this natural stressor may impact juvenile recruitment of the affected year-class of Red Drum and Spotted Seatrout.

Two types of gear, bag seines and gill nets, were used to investigate the effects of red tide on Red Drum and Spotted Seatrout. Data collected during bag seine and gill net sampling included hydrological measurements (i.e., salinity, temperature) along with fish counts and lengths. In addition, cell count data collected during red tide events were used to determine the extent of the red tide. We compared juvenile Red Drum and Spotted Seatrout in our bag seines in 2011 and 2015 to the gill net data two years following the event, to determine if there were any effects in the recruitment of the two species – post red tide exposure.

It is important to understand that environmental parameters such as salinity, dissolved oxygen, and temperature are closely linked to the life history of every organism in the bay. Every sample collected by each gear had its own hydrological data associated with it in order to determine which impacts on Red Drum and Spotted Seatrout were due to natural variation and which were due to the red tide event.

What did we find? The negative impacts to our Red Drum and Spotted Seatrout populations were much lower than anticipated. In fact, both species proved to be very resilient, maintaining good abundances in the LLM during red tide events. Consistent catches of Red Drum and Spotted Seatrout were observed in bag seines during the two red tide events. Red Drum spawning during the Fall 2011 and 2015 bloom events did not significantly impact juvenile abundance in bag seine samples during the following spring season.

Gillnet catches for 1 to 2-year-old Spotted Seatrout and Red Drum individuals showed no apparent decrease among the targeted age and size class in the two years following the 2011 and 2015 red tide events.  This analysis revealed that these two bloom events did not have a significant negative effect on the juvenile Red Drum and Spotted Seatrout populations sampled in our bag seines, despite the presence of high toxic cell counts. In addition, the secondary effects did not reduce the recruitment of the targeted fish as subadults and adults.  Further investigation into all age and size classes of Red Drum and Spotted Seatrout also displayed little to no effects linked to red tide in the recruitment of both species.

The results of this study do not indicate that K. brevis does not have any effect on Red Drum and Spotted Seatrout populations. Both species were included in the top ten species of overall fish mortalities during the 2011 bloom, with Spotted Seatrout and Red Drum comprising 3% and 1% respectively. Even though the 2011 red tide event continued for five months, three months longer than the 2015 event, the LLM has not yet had to endure a yearlong bloom like those seen in Florida where in some counties, a catch and release mandate was issued for recreational fishing activity in efforts to sustain fish populations. Overall, Red Drum and Spotted Seatrout displayed resiliency to red tide in the LLM. However, every red tide bloom is a dynamic event and every fish species will react differently to the effects of the red tide toxin. It is said with some relief that these findings affirm how adaptable the fish community is to the natural and harmful stressors that affect our coastal ecosystems with every changing season.