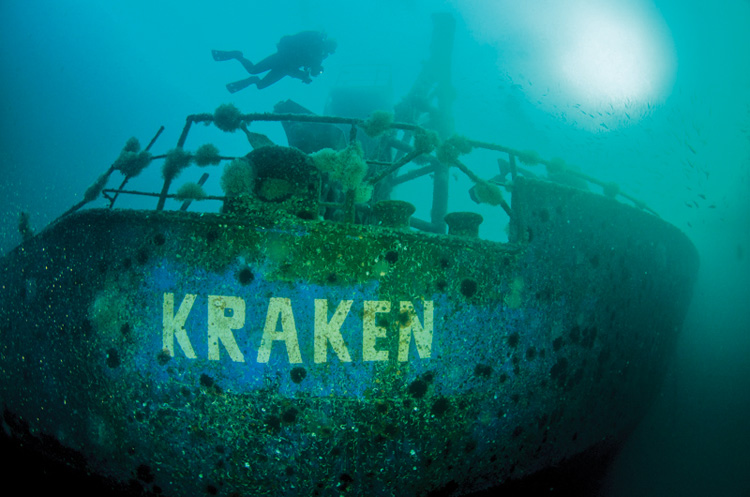 The Kraken sits prominently above the ocean floor providing marine habitat, along with diving and fishing opportunities for the public.

The latest Texas Parks and Wildlife Department (TPWD) artificial reef ship project happened earlier this year.The Kraken was released on January 20, 2017. Aside from a few minor issues with the laws of physics, the sinking went perfectly. The 371-foot long ship is sitting on the bottom of the Gulf of Mexico, perfectly upright with a clearance of 60 feet above her to protect vessel traffic. Due to rising seas, our team was able to complete only one quick checkout dive the day after the sinking, and then we had to let her fend for herself until the TPWD Artificial Reef Program scientific diving team could return in June.

The TPWD Artificial Reef Program is responsible for promoting, developing, maintaining, monitoring, and enhancing artificial reefs off Texas in the Gulf of Mexico. To date, 91 artificial reef sites totaling more than 7,400 acres are in the program. These reef sites consist of Ships-to-Reefs, like the Kraken, Nearshore Reefs, and Rigs-to-Reefs.

TPWD has nearshore reef sites near all major ports on the Texas coast within nine nautical miles of shore, although some sites are still waiting for material to be deployed. By creating nearshore reefs, we encourage the development of nearshore marine habitat and increase the economic potential of coastal communities through enhanced fishing and diving activities. These reef sites are made primarily of recycled construction materials like concrete culverts or pre-fabricated reef pyramids.

In the Rigs-to-Reefs program, petroleum companies can donate their inactive or decommissioned rigs to be recycled into prime fish habitat, resulting in excellent fishing and diving sites that we can all enjoy. This program is a win-win situation for all involved. Everyone shares the fantastic habitat that has grown on the structure over the past 30 years or so of operation, plus the companies do not have to completely remove the structure, thus saving them money. Half of the money that is saved is donated back to the Artificial Reef Program where the funds are used to enhance existing reefs, maintain buoys, construct more nearshore habitats, and fund research.

The Ships-to-Reefs program utilizes obsolete or surplus vessels, like the Kraken, to further develop artificial reefs off the coast of Texas. There are 29 ships that have been reefed by the Artificial Reef Program to date. These ships include multiple World War II Liberty Ships as well as the USTS Texas Clipper that was formerly used as a cadet training vessel for the Texas A&M Maritime Academy.November 2017 will mark the tenth anniversary of the sinking of the Texas Clipper.

The process of sinking the Kraken, a Japanese-built general cargo carrier constructed in 1987, was completed by the Artificial Reef Program in cooperation with several environmental consultants.The funds to reef her were awarded to the State of Texas through the Natural Resource Damage Assessment program to compensate for lost recreational fishing and diving opportunities in Texas waters of the Gulf of Mexico caused by the BP Oil Spill in 2010. In March 2016, TPWD contracted with Cahaba Disaster Recovery (Alabama) for the acquisition, modification, cleanup, and reefing of the Kraken.

Since the sinking of the Kraken, about 67 nautical miles offshore of Galveston in 140ft of water, she has become a fantastic artificial reef. The location was chosen to meet our needs of having water deep enough to cover the ship while providing a minimum clearance of 60ft over her, and would be in water clear enough for the best diving.

We surveyed the Kraken for the first time on our June 2017 monitoring trip. Prior to the sinking of the ship in January, we collected pre-reefing fish data and found only a few species of shark. Since the sinking, the Kraken has become home to large populations of red and vermillion snapper. Divers have also reported seeing king mackerel, cobia, several species of jacks and grouper, and schools of mackerel scad so thick they were interfering with our visual surveys. Oh, and a large sting ray and two octopuses have claimed this ship as their home. (How befitting since the Kraken is a mythical sea monster that closely resembles an octopus…but with more teeth!). The TPWD dive team have now recorded a total of 48 unique fish species during their surveys.

The diversity at the new reef site is impressive considering the ship has been down for such a short period of time. There has been strong recruitment of larger fish at the Kraken, but more important is the presence of both predatory and non-predatory fishes at the site. Spawning behavior was seen by one diver as well, providing further evidence that the ship is already producing biomass, not just aggregating fish.

The Kraken is a prime example of the positive impacts that artificial reefs have on marine habitats. She is a unique and productive site for fishing and diving that will be enjoyed for many years to come!