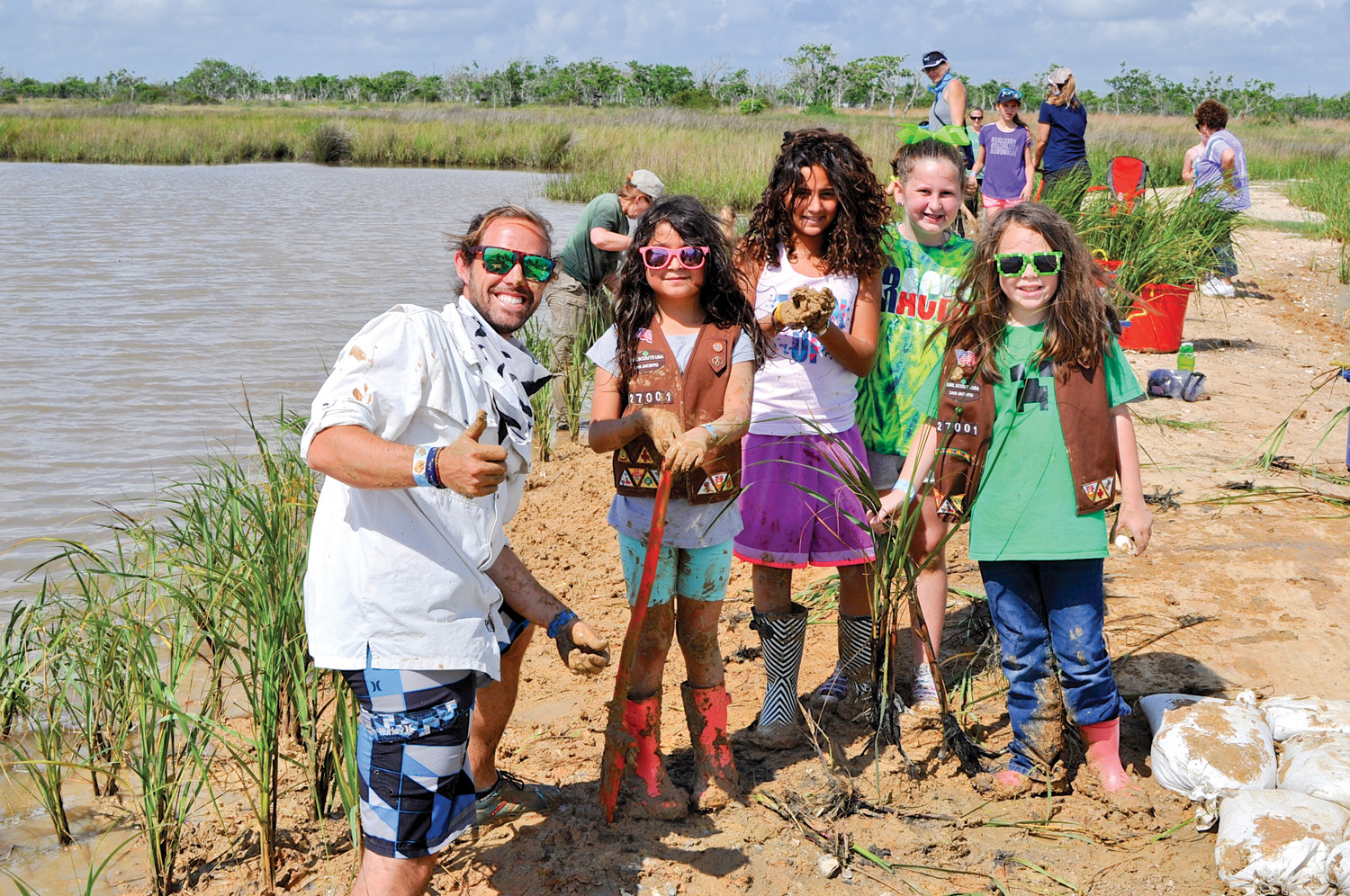 This story begins in Dickinson Bayou, a water quality impaired watershed, located along the upper Texas coast within the Galveston Bay ecosystem. A large group of concerned private citizens along with representatives from several local, state, and federal agencies formed a community-based partnership with the goal of improving the bayou’s water quality. This diverse stakeholder group developed the Dickinson Bayou Watershed Management Plan (www.dickinsonbayou.org). The Plan’s main objectives included reducing water quality degradation in the upper bayou and finding opportunities to increase habitat in its lower reaches.

Once the Dickinson Bayou Watershed Management Plan was in place, Texas Parks and Wildlife Department (TPWD) staff identified a potential restoration site. This site was undergoing significant erosion with 50% of the salt marsh in the area having been converted to open water since the 1930s. Habitat restoration here would improve water quality and increase available habitat for finfish, shellfish, and wildlife. TPWD formed a project team (with over ten partners including the participating landowner) to design, seek funding for, and implement the Dickinson Bayou Watershed Restoration project. The team envisioned the restoration of a sustainable wetland on this site that would achieve one of the major goals of the watershed management plan.

After funding was awarded for the project, the plans were engineered and construction began in June 2016. Restoring the site required transport of over 130,000 cubic yards of sediment material that came from within the bayou. Sediments are typically sands, silts, or clays that come from the weathering of rock or erosion of upland soils which have been transported by flowing water (such as from rivers). These sediments then get deposited in the calmer waters of stream beds or bay bottoms. For this project, dense, fine clay sediments were excavated to build ~3,000 linear feet of containment berms. Once the containment berms were completed, silty material dredged from the channel was used to fill these containment areas. This silt material was removed from the channel bottom along with large quantities of water so that it could be pumped out and placed in these containment areas as a slurry. Over time the water drains off and only the silt remains. An additional 2,000 cubic yards of concrete rock material was placed on the outer side slopes of the earthen berms to deflect wind and wave induced erosion. Another 1,000 cubic yards of rock concrete was used to create a living shoreline breakwater to protect existing wetlands on the south side of the project area too. Construction was completed in August 2016.

With construction completed, the sediments in the containment areas began to consolidate and dewater. The target for the overall restoration site settling was to an elevation that supports healthy wetland plants. This dewatering process is on-going and expected to take about 12- to 18-months to reach the final designed elevation. During this settlement phase, TPWD and other project partners organized a public outreach event with the local Sea Scouts to harvest plants. The first group of sea scouts harvested 4,000 smooth cordgrass (Spartina alterniflora) plants from the NRG EcoCenter nursery in August 2016. Then, project partners from multiple resource agencies used a variety of methods including an airboat, kayaks, and manual placement to plant the cordgrass. Plants were placed in the unsettled materials to “jump start” wetland plant colonization at the project site and help stabilize the containment berms. In 2017, the Galveston Bay Foundation and TPWD also sponsored an Earth Day “Marsh Mania” public planting event at this restoration site. About 80 local volunteers placed 6,375 plants while learning how important their stewardship is for this watershed. Figure 4 shows one local Girl Scout troop at the “Marsh Mania” event. Student Conservation Association teams (up to 10 young adults) will be planting up to 58,000 additional wetland plants during the spring and summer of 2017. This will be followed by two years of monitoring to insure long term project success.

When completed, this successful “partnership-based” restoration project will have restored 10 acres of salt marsh habitat. It will also have protected and enhanced 18 acres of existing wetlands that would have been converted to open water habitat due to erosion over the next 25 years without intervention. This community-based partnership is a large one that could not have been completed without the collaborative efforts of a wide array of partners. This project is only a reality because of all the funding and resources they provided. Their efforts, through this project, have provided an important foundation for the community to continue to improve water quality and habitat for fish and wildlife in a vital watershed of the Galveston Bay Ecosystem.