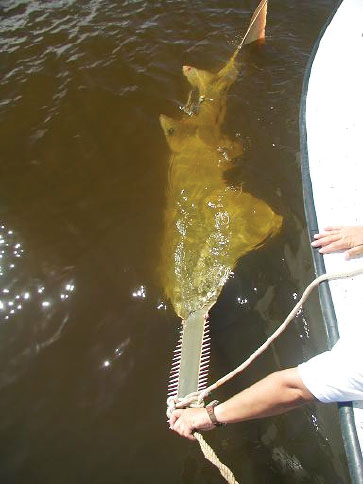 Their odd appearance and awesome size made them a prized catch for fishermen along the Texas coast. Net fishermen considered them a nuisance because of the damage they would cause to their gear. Their unique elongated, blade-like snouts, studded with teeth on both sides, were often kept as trophies. But none have been caught in Texas for over 2 decades. The sawfish: large, distinctive rays once common in coastal waters of Texas but now gone.

Distinguishable by the number of teeth found on the rostrum, or namesake "saw", both species could reach lengths over 18 feet. The Texas state record was caught in 1939, a 736 pound largetooth sawfish, measuring 14 feet 7 inches in length. Numerous postcards and photographs from the early 1900's bear the scene of fishermen hauling in the large creatures to docks and beaches across Texas. A mural painted on the side of a building in downtown Rockport depicts a 17 foot sawfish captured by trawlers in Matagorda Bay in the late 1920's. They were once so common that one fisherman caught 3 largetooth sawfish off Galveston in one summer weekend in 1940. Within 4 years, no largetooth sawfish would be seen again in the United States. The last confirmed record occurred in Texas in 1943.

The smalltooth sawfish remained in Texas a little longer. Catches were plentiful in places like the Bob Hall Pier in Corpus Christi until the 1960's. But the last confirmed record of a smalltooth sawfish in Texas waters was captured by Texas Parks and Wildlife personnel during their routine sampling in Aransas Bay in 1984. Today the smalltooth sawfish is found predominately in south Florida around the Everglades National Park. This vast expanse of natural habitat, and limited fishing pressure, likely served as the last refuge for sawfish in the United States.

What happened to these grand creatures? What caused them to vanish from Texas waters? Overfishing, low reproductive potential, and habitat loss, are responsible for the decline of both species. Fishing mortality contributed significantly to the elimination of sawfish from Texas. Most sawfish caught were killed. Hung up to be photographed and their saws removed for a trophy. Their meat was used for food, their skin for leather, and their liver oil in lamps. Their fins are valued for shark fin soup, their rostral teeth used as artificial spurs in cock-fighting, their cartilage ground-up for traditional medicines, and their saws sold as curios. Sawfish bear live young, take many years to reach sexual maturity, and produce very few offspring per reproductive cycle. This reproductive strategy didn't allow the sawfish to replenish the population as fast as they were being harvested. Born at about 2 feet in length, juvenile sawfish rely on very shallow, coastal and estuarine waters close to shore for safety from predators, such as sharks, during the first years of their life. Throughout the Gulf coast, much of the shoreline has been developed. Seawalls, beaches, marinas, and docks replaced much of the natural vegetation and shallow zones used by sawfish as important protective nursery areas.

Due to the dramatic decline of sawfish populations, The Ocean Conservancy petitioned National Marine Fisheries Service to protect both species under the Endangered Species Act (ESA). When the status review was complete, there was no evidence that largetooth sawfish still existed to protect, although they remain a Species of Concern. The smalltooth sawfish was classified as Endangered in 2003, making it the first fully marine fish and first elasmobranch (sharks, skates and rays) protected by the ESA.

Will they ever return to Texas? The largetooth sawfish is likely extirpated, locally extinct, gone for good. However, the smalltooth sawfish just might make a comeback to the Lone Star State. The National Marine Fisheries Service Smalltooth Sawfish Recovery Plan contains criteria to remove the species from the Endangered Species List including that verified records of adult smalltooth sawfish are observed in 12 out of 14 years, with consecutive records occurring in the last 3 years, in the area of the Gulf of Mexico from Texas to Alabama. However, this recovery is expected to take approximately 100 years if all recovery actions are fully funded and implemented.

Meanwhile field research continues on the remnant population in Florida. Many more questions need to be answered to develop effective conservation measures to protect the species. It is still unknown how long they live, where and when they mate, how often they reproduce, and what habitats are needed for adults.

The best method of monitoring the population as it recovers is the use of the National Sawfish Encounter Database (NSED). Facilitated by the Florida Museum of Natural History the NSED collects public reports of sawfish captures and sightings. This information can be used to examine the distribution and habitat use of the species. If you catch or see a sawfish, please report it to the NSED. Email: [email protected] Telephone: 352-392-2360.

As a federally protected endangered species, it is illegal to harm or disturb a sawfish in any way. Many states, including Texas, list both species of sawfish as prohibited take. Any sawfish which are caught while fishing must be immediately returned to the water unharmed. The International Union for Conservation of Nature and Natural Resources (IUCN) categorizes all species of sawfish as "critically endangered" on their Red List of Threatened Species. In 2007 the Convention on International Trade of Endangered Species (CITES) granted protection to all sawfish species, prohibiting the international trade of sawfish and their parts, except for limited aquarium trade. With these management rules in place, coupled with the protection and restoration of important habitats, the sawfish might just return to the coastal and estuarine waters of Texas. Maybe some day we'll get to see one again.