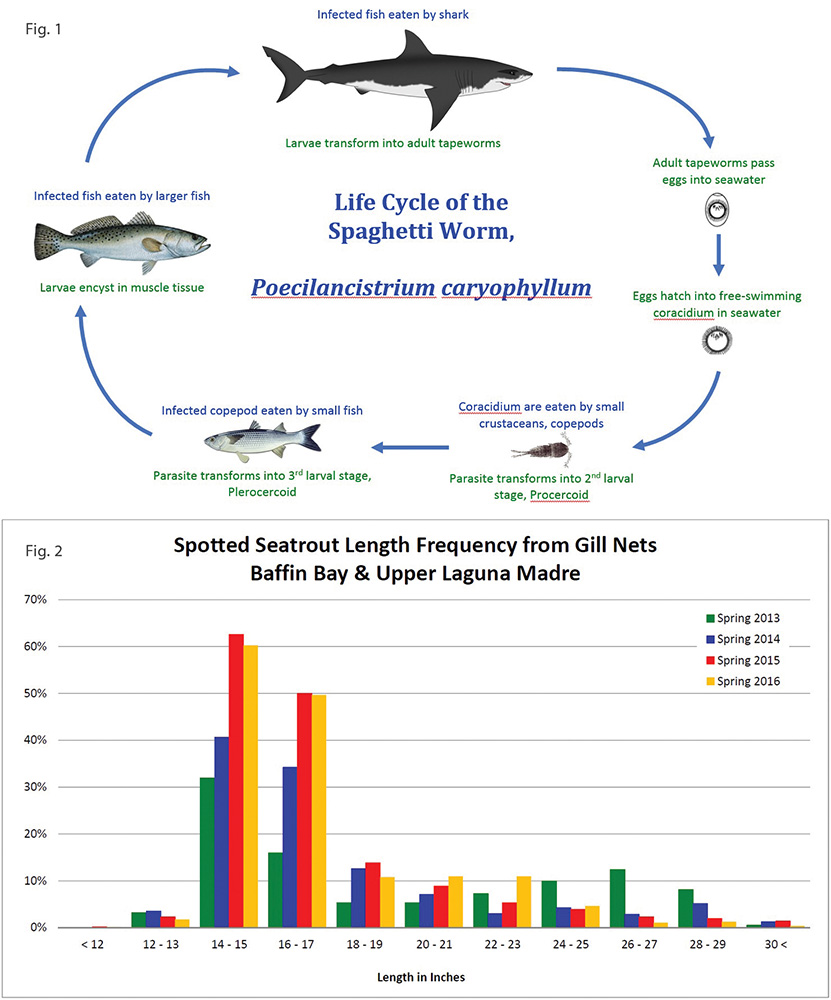 Like many of you, in the summer of 2016, I spent a lot of time enjoying the great outdoors at a boat ramp.The difference was that I was on the other side of boating life with a bucket and a measuring board helping Texas Parks & Wildlife (TPW) employees conduct angler surveys.After a few hundred interviews, I began to notice that there were some fishing topics that anglers would often bring up.Most of these topics, like those to follow, were subjects that could easily be answered with science.

It Shrank in the Ice!

Ah, yes.You brought back a fish that is smaller than regulation.It is almost guaranteed that at every survey conducted there will be a handful of anglers who say their fish shrank because it was kept on ice.Before you start thinking “it really happens” let me say that it does shrink… a little.

A study was conducted by TPW scientists to observe just how much a Spotted Seatrout (Cynoscion nebulosus) would shrink when placed on ice.After taking hourly measurements for twenty-four hours on several fish specimens stored on ice, they found that fish shrink between 2 and 5 millimeters, which roughly translates to about 1/5th of an inch.In the scale of things, that is not a lot of shrinkage.

So, when you land a fish that might have a questionable length, here are a couple of tips to keep in mind.First, know the size limits of the fish species you are landing.Second, make sure you are measuring with an accurate ruler.Anglers often use the ruler imprinted on top of their cooler, but keep in mind that coolers are made from a mold and the measurements may not be accurate. Finally, make sure that the fish is being measured correctly; close the mouth and measure to the furthest tip on the caudal/tail fin.

My Fish Fillet has Worms!

Occasionally anglers come back from a great day of fishing and begin filleting their catch only to find several small, white worms in the flesh.  These are known as spaghetti worms, but are scientifically called Poecilancistrium caryophyllum.  Fish in the drum family, including spotted seatrout, black drum and redfish, are the most common hosts for these parasites.

What some anglers may not know is that these worms are actually just one of several juvenile stages of a tapeworm that prefers the intestines of sharks.  In Figure 1, you can see how an egg develops into the worms you may see in your fish fillets.

The important question you might ask is: does this mean I’ll get a tapeworm?  The simple answer is, no!  Most worms can easily be removed from the flesh while you are filleting by gently pulling them out.  If that’s too much work, the worms will typically die in the cooking process.  In the rare case a worm manages to survive being cooked and your stomach acid, rest assured you are still safe.  Scientific studies have shown that these larvae will not mature into adults in warm-blooded animals. So while these worms may not look appetizing, they are harmless to humans.

Where Are All the Big Fish?

You spent hours fishing only to come back with a couple of keepers or nothing at all.The fish were out there, but everything biting is too small to keep.This is another common issue at the boat ramps, but believe it or not a lot of this comes from the basic biology of the fish you may be seeking.

Spotted seatrout, for example, move into the warm, shallow waters of bays in the spring to spawn around seagrass beds through the summer.A young female will lay thousands of eggs, while older and larger females lay over a million eggs at a time.However, only an extremely small percent of these eggs will hatch and survive to sizes greater than 28 inches.As a result, our bays will have larger percentages of smaller, younger fish.Evidence of this has been found by TPW Coastal Fisheries staff in their annual spring gill net assessments.In Figure 2, you can see that the size with the largest percentage of spotted seatrout caught was under the legal limit, and the percentages decrease as the size increases. So, where are all the big fish?Well, they are out there, somewhere, but there are statistically less of them.

It is impossible to say just how many times these topics came up during my short internship, but it was more than enough that these issues stayed with me.Hopefully, the data provided answered some questions you may have had, but never thought to ask.Stay safe out on the waters and remember the data you give TPWD surveyors today can help the anglers of tomorrow.