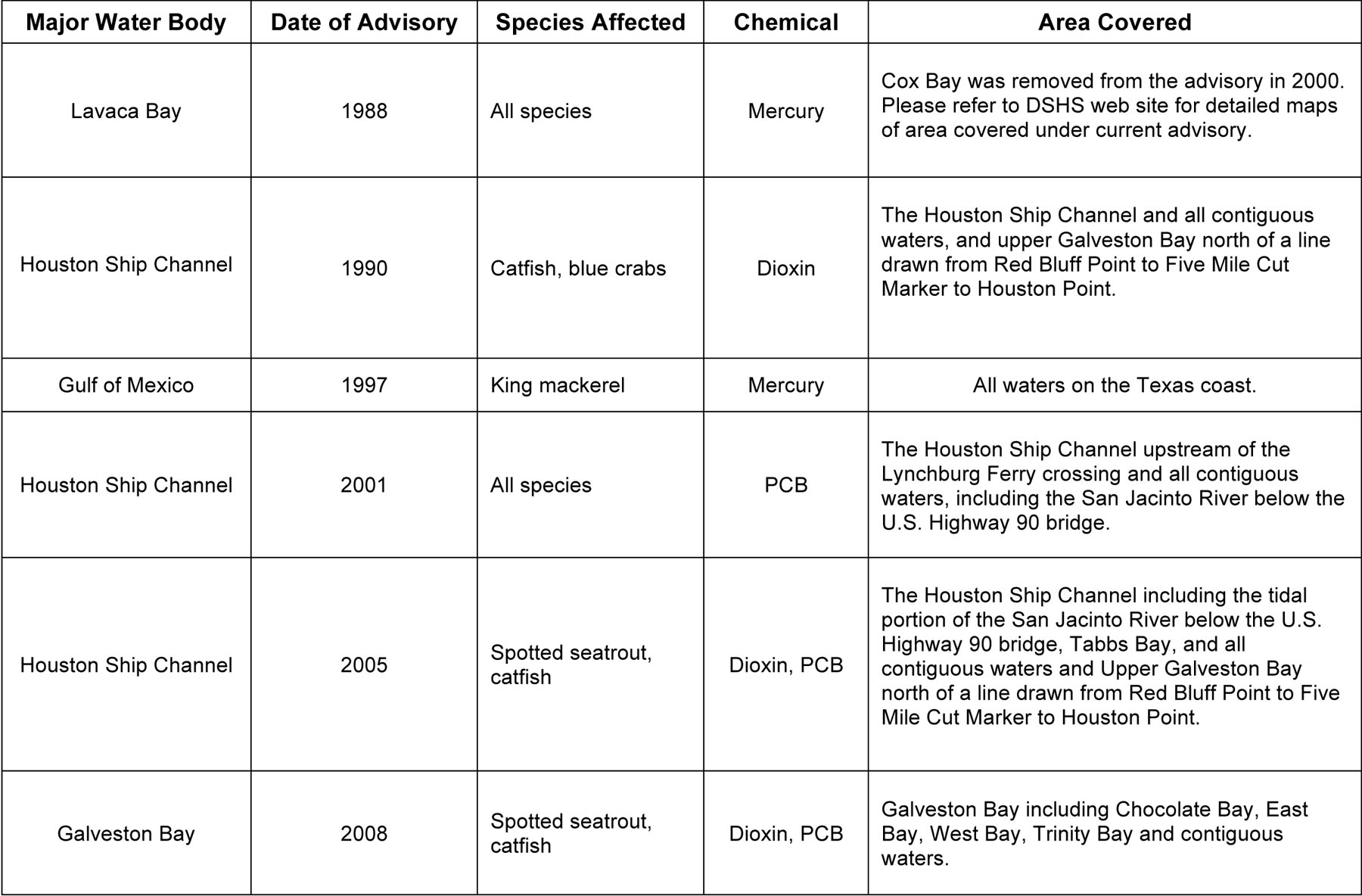 Seafood consumption advisories for marine waters are not new to Texas. Beginning in the late 1980's consumption advisories have been issued when levels of specific contaminants found in fish or shellfish exceed health levels established by the Texas Department of State Health Services, Seafood and Aquatic Life Group (see attached table).

The recent consumption advisory issued for spotted seatrout and catfish caught within Galveston Bay has generated considerable questions and confusion among recreational anglers. Here are answers to some of the most frequently asked questions:

What are PCBs and Dioxins?

PCBs (polychlorinated biphenyls) are a family of man-made organic compounds that have been widely used since 1929 as coolants and lubricants in electrical equipment (transformers, capacitors, etc.) because they don't burn easily and are good insulators. PCBs are stable compounds, are long-lived in the environment, and can be found everywhere. Concern over toxicity and persistence in the environment led Congress in 1979 to prohibit the manufacture, processing and distribution of PCBs.

Dioxin is a general term describing a family of organic chemicals that last for a long time in the environment. They are formed as unintentional by-products of many industrial processes involving chlorine such as waste incineration, chemical and pesticide manufacturing and pulp and paper bleaching. Dioxins are toxic at very low concentrations. Relative to the 1970's, sources of dioxin have been greatly reduced, but some sources of dioxin still exist in combustion of fossil fuels and wood, incineration of solid waste, and certain chemical manufacturing processes.

How do PCBs and Dioxin affect people?

PCBs and dioxins have been found in soil, ground and surface water, air, sediment, plants, and animals in all regions of the world. PCBs and dioxins break down very slowly in the environment and accumulate in fatty tissue, skin, and internal organs of fish and other animals. The amount of PCBs/dioxins found in fish varies with species, age, size, fat content, diet, and surface water concentrations. Larger, older fish will generally contain higher levels of PCBs/dioxins than smaller fish. The types of PCBs that tend to concentrate in fish and bind to sediments happen to be the most carcinogenic components of PCB mixtures. Eating fish that contain PCBs may affect the immune system, reproductive organs, skin, stomach, thyroid, kidney, liver and may increase the risk of cancer. PCBs are also suspected of causing lower birth weights in infants, delayed physical development and learning difficulties.

Why would Spotted Seatrout and Catfish show high levels of PCBs and Dioxins?

Once PCBs and dioxins have entered into an animal's body they get stored in fat tissue. This makes it hard for the organism to eliminate them from its body. As you move up the food chain the PCBs/dioxins compounds begin adding up (biomagnification). Predators that are at the top of the food web are going to accumulate the greatest concentrations. It is important to note that not all animals are the same at accumulating PCBs and dioxins. Factors such as growth rate, dietary preferences, migration habits, etc. play a role in determining the concentration that accumulates in the body.

What is the source of the PCBs and Dioxins in Spotted Seatrout and Catfish?

At this time the specific sources of PCBs in Galveston Bay are unknown. Because PCBs were once commonly used there are many potential sources. PCBs can be found in the sediments, rainfall runoff, in leaching water from buried equipment or landfills, inflow from contaminated tributaries, and atmospheric deposition. Once in the environment, they take a long time to degrade or break down. Dioxins are still being produced as a byproduct to some industrial processes and can also be found in old waste disposal sites.

TPWD, Texas Commission on Environmental Quality (TCEQ) and the Environmental Protection Agency recently worked together and found a significant legacy dioxin source in the San Jacinto River, which has become a Superfund site (http://epa.gov/superfund/sites/npl/nar1773.htm).

How much of Galveston Bay is affected by the Advisory?

What about Spotted Seatrout and Catfish caught outside the Advisory area?

The DSHS study did not include samples beyond Galveston Bay, Trinity Bay, East Bay and West Bay and therefore, no health risk evaluation can be made about fish caught from other areas. However, TPWD tagging data clearly shows that spotted seatrout move between bays, the Gulf beaches and other minor bays. TPWD is supportive of Texas DSHS in their attempts to locate additional funding to expand their monitoring efforts in waters adjacent to Galveston Bay and in other bay systems.

Are other game fish species affected?

Sampling conducted by the Texas DSHS in 2004 and 2006-2007 included samples from the following species: red drum, black drum, southern flounder, gafftopsail catfish and blue crab. Because of this, no recommendations can be made for other species.

What should people do?

Seafood consumption advisories are designed to provide anglers with information they can use to make informed decision about the level of risk they're willing to accept in eating fish. Catch and release fishing is already a preferred practice of many anglers and is a way to minimize risk since no fish is consumed. However, if you choose to eat fish covered by this advisory there are some other things you can do to reduce your risk. Since PCBs/dioxins readily accumulate in the fatty tissues of fish, anglers can reduce exposure to these chemicals by removing the skin, dark muscle tissue, and fatty portions (i.e. belly fat, side fat, and fat along the top of the back) before cooking. The DSHS recommends baking or broiling skinned, trimmed fish on a rack or grill to allow fat to drip away from the fillet. If fish are fried, the frying oil should not be reused.

Following these preparation and cooking methods will reduce exposure to many of the most common organic chemical contaminants in fish, including PCBs/dioxins. Additional information about preparing fish for consumption can be found at www.dshs.state.tx.us/seafood/eatrisk.shtm and www.atsdr.cdc.gov/HAC/PHA/oakridge013107-TN/appc3.pdf. For more information about how PCBs/dioxins affect fish and fisheries, contact Lance Robinson (281-534-0101; [email protected]) or Bill Balboa (281-534-0110; [email protected]).