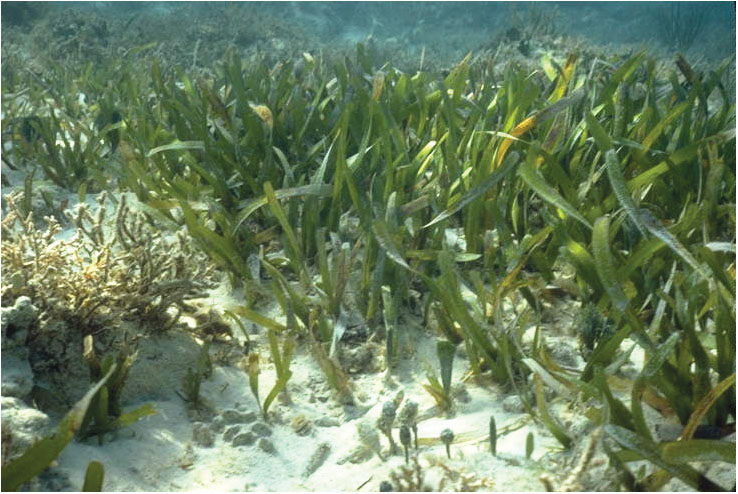 Seagrasses, or submerged aquatic vegetation (SAV), are flowering plants that live in shallow saline waters usually in a protected lagoon or bay environment. Seagrasses require sunlight, water, nutrients, and a soft muddy substrate. Vast expanses of seagrass meadows provide a unique habitat for many estuarine dependent plants and animals. Seagrass habitat plays a major role in the reproductive cycles of many recreationally and commercially important species in the Coastal Bend. Fish and shellfish utilize seagrass habitats in the early stages of their life cycles, feeding on organic matter produced by decomposing seagrasses and hiding from larger predators among the seagrass blades. Although seagrass beds have been recognized as highly important and productive habitats, they do not go undisturbed. Such factors as brown tide, degradation of water quality, channel dredging activities, boat propeller scarring, and shoreline development are identified as contributors to the fragmentation of seagrass beds.

Habitat: Seagrass meadows serve as nursery areas, providing refuge for many commercially and recreationally sought after fish and shellfish. In addition, seagrasses serve as a substrate for attachment of plants and animals, known as epiphytes. These epiphytic organisms provide an important food source for small fish and invertebrates.

Food Source: When seagrasses die and decompose, they form detritus decaying organic matter - which is the basis of the food chain. Many smaller invertebrates utilize detritus as a food source. Larger organismsrely on smaller ones for food and sustenance. In addition, the Coastal Bend is part of the American Central flyway and seagrasses are an important food source for many species of migratory waterfowl.

Nutrient Cycling: Seagrasses are primary producers, using the sun's energy to form organic material. In the process, seagrasses utilize and recycle nutrients both in the water column and the sediments. This serves as a buffer for nonpoint source pollution by filtering contaminants from the water and sediment.

Economics: The Coastal Bend area supports a $261 million fishing, tourism and recreation industry, which may be attributed to the productivity and extent of seagrass habitat.