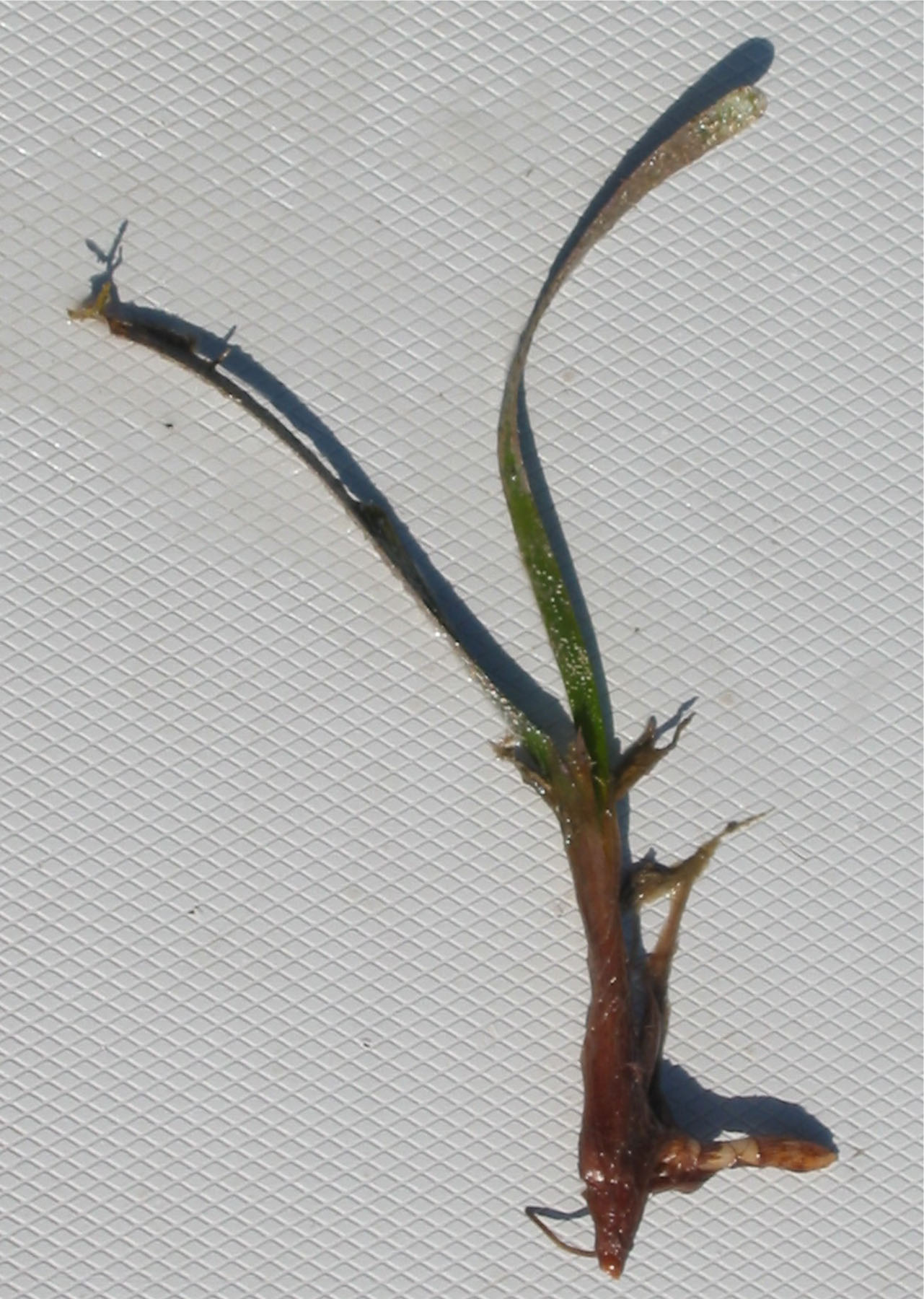 Turtle grass leaves are up to 14 inches long and 1 cm wide with a rounded leaf tip and the base of the leaves are usually covered with fibrous remains of old leaves.

If you've ever had a great day fishing it's a good bet that one of your fish may have spent part of its youth in a seagrass bed. Seagrass meadows provide necessary nursery areas for many important fish species. They are very productive habitats which provide food and shelter for juvenile fish species, crabs, and shrimp, so the loss of these habitats create significant concern among several resource agencies.

Unfortunately, by the late 1970's, seagrass in the Galveston Bay complex had almost entirely disappeared due to dredge-and-fill activities, boat traffic, subsidence, erosion, storms, and wastewater discharges. Since Christmas Bay is one of the most productive and least disturbed minor bays within the Galveston Bay complex , it became a priority conservation site for state resource management programs. By 1988 Texas Parks and Wildlife (TPWD) and the General Land Office designated Christmas Bay an official State Coastal Preserve and State Scientific Area. However, in 1989 an extensive plant survey estimated that only 700 acres of submerged aquatic vegetation still existed in Galveston Bay, with approximately 386 acres in Christmas Bay and the remainder along Trinity Bay.

In 1998 TPWD conducted a mapping project to determine the status of seagrass in Drum and Christmas Bay using aerial photography and geographic information system (GIS) software. At that time, seagrass in Christmas and Drum Bay covered approximately 424 acres and that Christmas Bay contains four of the five seagrass species found in Texas. Most often found are mixed shoal grass (Halodule wrightii) and clover grass (Halophila englemanni) beds, with widgeon grass (Ruppia maritima) becoming abundant in the spring and fall and interspersed patches of turtle grass (Thalassia testudinum) along the south shore. The presence of Thalassia in Christmas Bay is significant since the nearest known population is 150 miles south in Aransas Bay near Rockport. To compare the present status of seagrass in Christmas and Drum Bay with the previous study, new aerial photographs were taken in December 2005 and compared with the 1998 photographs. The same aerial photographer from 1998 ,the same flight plan and methodology were used to eliminate bias. The photographs were groundtruthed (i.e., seagrass signatures in the aerial photos were compared to their actual physical location) and compared with the older maps and aerial photographs.

Groundtruthing consisted of locating the 92 GPS points used in the previous study and taking three 4-inch core samples at each site to determine seagrass species present. Seagrass classification at each site was determined by examining which core samples contained the most species of seagrass; for example if two of the three core samples were bare and the third contained shoalgrass, that site was classified as shoalgrass. The aerial photographs were then compared to GIS maps from 1998 to evaluate seagrass population trends in Christmas Bay over the past six years; including measuring changes in acreage, patchiness, and whether a shift in distribution and species composition has occurred.

Seagrass acreage within Christmas and Drum Bay appears to have continued to increase slightly, with the exception of widgeongrass. The aerial photos from 2005 show a total acreage for Christmas and Drum Bay of 436.6 acres, which is a slight increase from the 424 acres in the 1998 and the 386 acres in 1989. Seagrass still primarily consisted of mixed beds of shoalgrass and clovergrass, with shoalgrass being the most abundant.

There was no significant change in species distribution between 1999 and 2006 based on groundtruthing points despite the fact that turtlegrass had almost doubled in acreage and no widgeongrass was found in 2006. Widgeongrass is often seasonal, typically being abundant in the spring, moderate in fall, but rather scarce in summer and its growth has been shown to be positively correlated with cool spring temperatures and not with low salinities. Seagrass groundtruthing at those sites which previously contained widgeongrass, occurred in November and the widgeongrass may have already begun seasonal senescence.

Seagrass in Christmas and Drum Bay also appears to be healthy. Fragmentation of seagrass beds may be considered an initial stage in seagrass decline and seagrass patches are usually subject to impacts from fetch or mechanical disturbance which could lead to their complete loss in a bay system. Fragmentation of the mixed shoalgrass and clovergrass beds was not observed from the 2005 aerial photographs nor was a loss of seagrass. This suggests that seagrass still retains some relative protection in Christmas Bay from the "human" factors described in 1998 (including the absence of dredging, waterfront development, and point source and non-point source discharges into the bays) and that juvenile fish will have a safe place to grow for years to come.