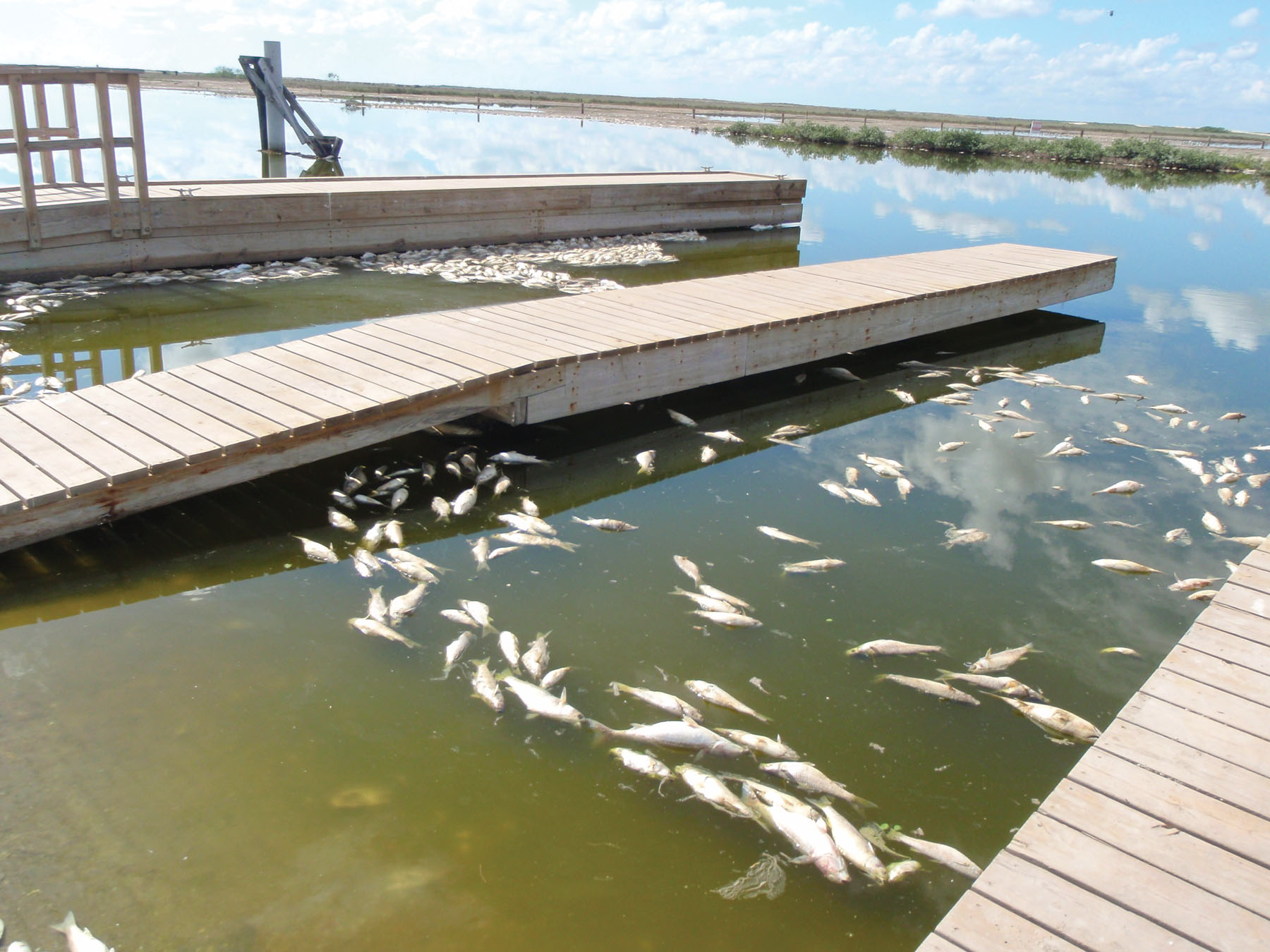 Red tide was likely first documented by the Spaniards in 1530. Spanish explorer Nunez De Vaca recorded stories by Florida Indians of toxic "red water", resulting in the death of birds and fish. The first documented Texas red tide was made in 1935, off Mustang and Padre Islands. The resulting massive fish kill, accompanied by aerosol that caused coughing, sneezing, and watery red eyes, was thought to be a result of an underwater volcano in the gulf. It was not until 1947 that scientists discovered the cause of red tide.

Red tide is caused by the overgrowth, or bloom, of a microscopic alga known as dinoflagellates. Red tide blooms occur globally and different dinoflagellates may be responsible for blooms in different regions. In Texas, as well as the Gulf of Mexico and Caribbean Sea, red tides are typically caused by the species Karenia brevis.

Though research is ongoing to determine exactly what triggers a red tide, drought conditions are known to leave the Texas coast susceptible to blooms, as K. brevis prefers warm, salty water. It is believed that the appearance of red tides in some locations is entirely natural, as some algal blooms are a seasonal occurrence resulting from coastal upwelling. In other areas, outbreaks may be a result of increased nutrient loading. In general, events in Texas begin offshore from late August/early September and last as late as February.

The K. brevis cells contain a neurotoxin called brevetoxin. This toxin affects the central nervous systems of fish causing paralysis, rendering them unable to move water over their gills and essentially causing the fish to "drown". Filter feeding shellfish such as oysters, whelks, clams and mussels concentrate the brevetoxin in their tissue. When humans consume shellfish with concentrations brevetoxin, it can result in Neurotoxic Shellfish Poisoning (NSP). Symptoms of NSP include vomiting, nausea, and a variety of neurological symptoms such as numbness and slurred speech. NSP is not a fatal shellfish poisoning, and people generally recover in 2 to 3 days. The brevetoxin is heat stable and survives the cooking process. For this reason, the Texas Department of State Health Services restricts shellfish harvesting in bays when concentrations of K. brevis reach greater that 5 cells/ml and brevetoxin levels in shellfish remain.

Many residents unfamiliar with red tides have a common question, "Are the fish safe to eat?" Since the brevetoxin accumulates in the organs and not the muscle of a fish, fish that look and act healthy, and are caught by hook are generally considered safe to eat. Crustaceans, such as shrimp and crabs, do not accumulate brevetoxin and are safe to eat during red tides. However, it is best to avoid areas where dead fish have accumulated, and collecting the dead fish is illegal.

Karenia brevis cells are fragile and break apart easily and release the brevetoxin. It becomes air-born by wave and wind action, especially on the beaches where most effects are felt. Effects are temporary and include irritation and burning of the eyes and nose, and coughing. The brevetoxin is also known to have similar irritating effects on other mammals, such as dogs. In 2009 they were observed reacting to red tide, and a few mortalities of both coyotes and pet dogs were confirmed to have been associated with that event. Residents and visitors are encouraged to keep pets away from the beaches during a red tide.

Texas has experienced a wide variation in intensity and extent of the red tide associated fish kills since 1935. In 1986 Texas experienced one of its most severe red tide events, killing approximately 22 million fish. A comparable event occurred in 1997, resulting in an estimated 20 million dead fish. More recently, the 2000 and 2009 red tides impacted 2 to 3 million fish. Despite the large numbers, each kill impacted less than one percent of recreational and commercial species.

For the 2011 season, the first report came September 10, and was confirmed to be in the Brownsville Ship Channel, and quickly spread to other areas of the lower Laguna Madre. October marked the first signs of red tide in gulf waters and the Intracoastal Waterway. By October 24, it was confirmed from South Padre Island to Galveston Bay, affecting Port Mansfield, Padre Island National Seashore, Port Aransas, Freeport, Palacios, Matagorda and Port O'Connor.

Coastal Fisheries staff continued to monitor the event during November and December. Before press time, minimum estimates of mortalities due to this red tide were 4.4 million fish. These impacts are higher than observed during blooms in 2000 (2-3 million fish), but not as high as those observed in 1986 and 1997 (over 20 million fish).

For more information on red tide and the latest updates:

As this year's event continues to unfold, Texas Parks and Wildlife Department's Coastal Fisheries staff will be out on patrol. Though the impact to the local fish populations may seem large, it is all part of a never ending cycle. The fish lost to red tide will slowly decompose, releasing nutrients back into the water. These nutrients will help in the recovery of the affected fish populations by providing an abundance of food at the bottom of the food chain.