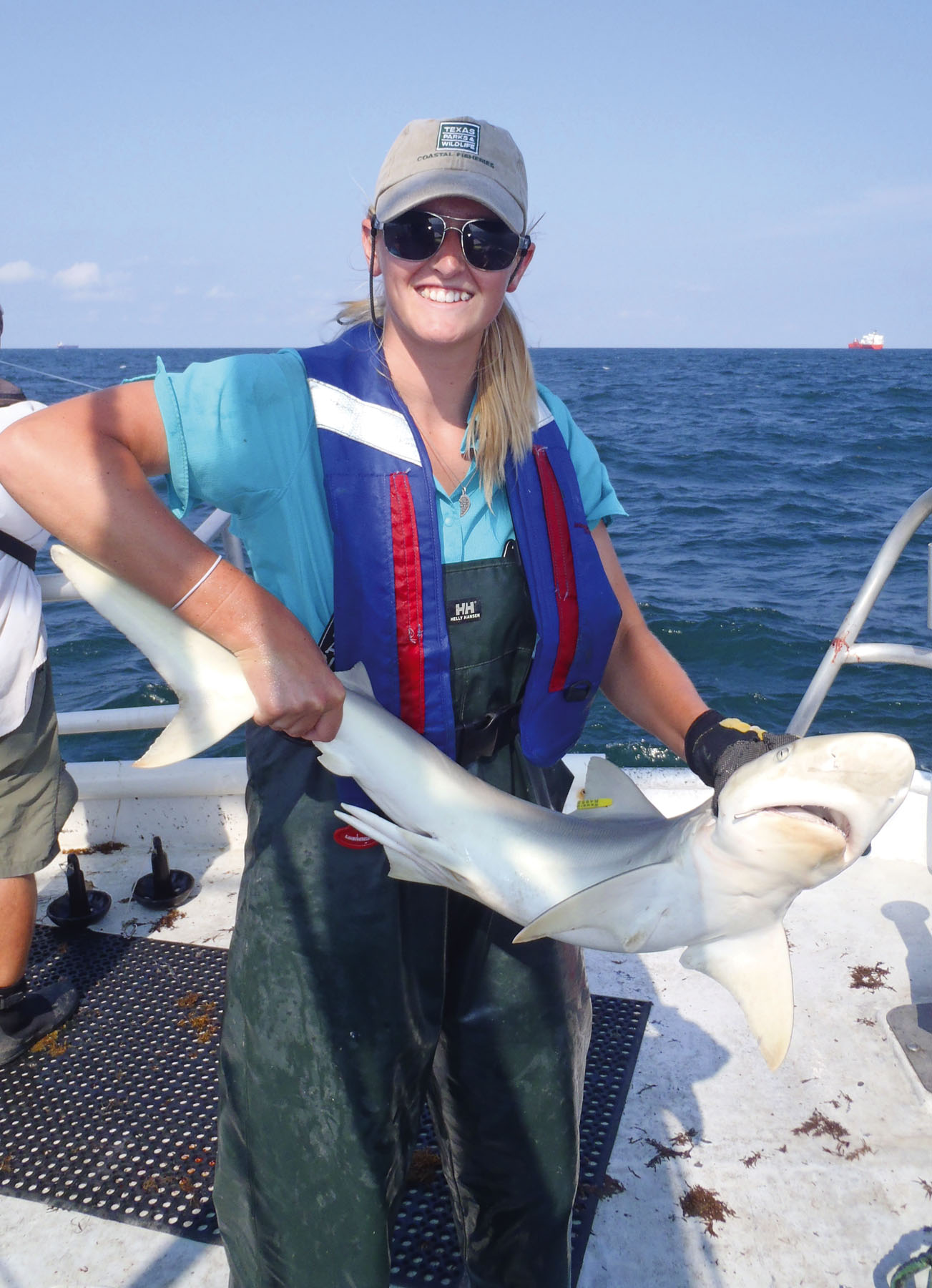 Author preparing to release tagged Atlantic sharpnose.
Longline offshore fishing trips with Texas Parks and Wildlife Department (TPWD) Coastal Fisheries employees are some of the most thrilling things I have ever done. There is nothing as exciting as trying to catch and tag sharks.

TPWD longline surveys follow the procedures set out by the National Marine Fisheries Service (NMFS), an agency of the National Oceanic and Atmospheric Administration (NOAA). TPWD sets twenty-six longlines in state offshore waters from Galveston Bay area to Corpus Christi Bay area, during the months of June through September.

Trips begin early in the morning while the sun is rising, allowing for breathtaking views of the Gulf of Mexico. While heading toward the first sampling site, we bait the hooks. A piece of Atlantic mackerel is double hooked onto the circle hook of each gangion, which are then stored in large barrels to make deployment easier.

When the sampling site is reached, several sets of seawater data are collected using hydrological instruments. These include salinity, dissolved oxygen, and temperature from the bottom, middle and surface depths. A water sample is also collected near the bottom and then bottled to take back to the lab to determine turbidity; and a Secchi disk is lowered into the water until it is no longer seen, which provides a visibility value (in meters) of the water clarity. Lastly, the color of the water is determined by using a Forel-Ule scale for comparison. Once all the hydrological data are collected, the mainline is ready to be set.

The fishing mainline is reeled off of a heavy longline winch. The high-flyer buoy is deployed first, followed by a fluke anchor. As the boat moves, the mainline pays out, and the gangions are clipped onto the mainline at 50 ft. intervals. Two mushroom anchors are separately deployed throughout the middle of the mainline to keep the line near the sea floor. At the end of the mainline and after all 100 hooks are set, one last fluke anchor is attached and the final high-flyer buoy is deployed. The setting of the last high-flyer signals the beginning of a one-hour soak time, which seems to take forever due to the significant amount of anticipation.

After the long awaited hour passes, it is finally time to pull in the main line and hopefully tag some sharks. Once the high-flyer buoy is retrieved, and the line gets reconnected to the longline wench, the gangions begin to appear. The excitement truly begins for me when I am looking outward off the stern watching the mainline come up.

The first shark coming over the rail is thrashing wildly. After anxiously waiting for the shark to calm down, I straddle its back behind its dorsal fin and hold down its head with my hands right behind the jawline, away from its razor sharp teeth, trying to avoid damaging its gills. Once the shark is secure, the total, fork, and standard lengths are recorded in millimeters with the use of a flexible measuring tape for the large sharks and a measuring board for the smaller ones. Sharks are carefully identified and weighed in kilograms using a hanging scale. During the collection of the biological data, a yellow Roto tag labeled REWARD is attached to the lower back section of the dorsal fin. Each tag also has a unique number for identification purposes. Once all necessary data are collected the shark is quickly released.

During my trips, I noticed that there were more Atlantic sharpnose (Rhizoprionodon terraenovae) caught compared to other shark species. I decided to do some research and generate a visual representation of the percentage of Atlantic sharpnose caught in our longlines compared to the other most commonly caught species: blacktip, bull, and spinner sharks. I reviewed TPWD longline data collected off the coast of Galveston from the months of June to August from 2010 to 2014. Over the past five years, Atlantic sharpnose made up 62% of the shark species caught during the longline trips. Could this be because Atlantic sharpnose may be more abundant than the other shark species in the area or are they just more susceptible to being caught by this gear? I didn't compare this data to that collected off other areas of the Texas coast, but it would be interesting to see if this same pattern occurs elsewhere.

The Coastal Conservation Association Texas is the non-profit organization that funded my internship with TPWD and provided me the opportunity to work side by side with Coastal Fisheries staff during their daily routines. Along with longline trips, I had the opportunity to participate in many other activities such as bag seines, shrimp trawls in the gulf and bay, oyster dredges, gill nets, creel surveys at local boat ramps, snapper surveys during the nine day federal season, trailering and operating small water crafts, data sonde retrieval and calibration, and an Anahuac salt marsh plant survey. These sampling techniques are utilized for the collection and identification of vegetation and vertebrate and invertebrate species that inhabit Galveston Bay and the Gulf of Mexico.

The opportunity to spend my 2014 summer with the technicians, biologists and other personnel at the Dickinson Lab was truly an unforgettable experience that will forever be appreciated.