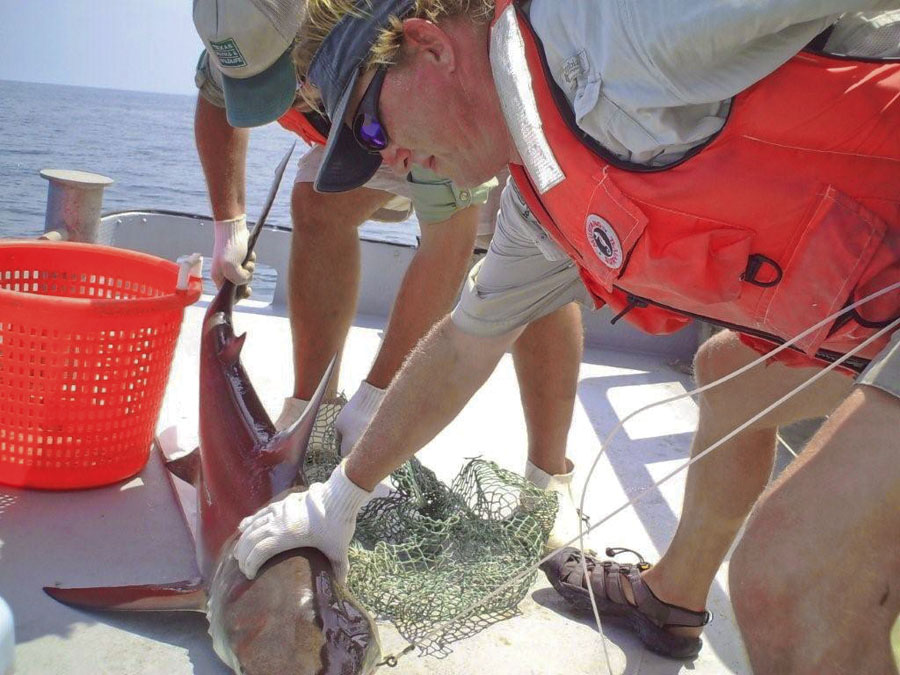 The adventure began at 6:00 a.m. May 28, 2010. Winds were calm and waves were non-existent. I was aboard the Research Vessel Nueces with the Corpus Christi Bay Ecosystem Management team, which is part of the Texas Parks and Wildlife Department's Coastal Fisheries Division. The crew was geared up for a highly anticipated shark longline trip offshore. Sharks have fascinated me since childhood and a trip out to target them for research purposes seemed like a dream come true.

Longline research is focused on monitoring populations of sharks in the Gulf of Mexico. National Marine Fisheries Service supports Texas and other Gulf states in this research. A total of 100 circle hooks were to be set along a one-nautical mile length of 1000 lb monofilament longline and fished on the bottom. The gear was to be set up, baited and fished in a manner that would target sharks, but often other fish such as red drum, gafftopsail catfish and hardhead catfish would also be caught.

When we arrived just offshore of the Port Aransas jetties, it was time came to cut up bait and prepare the hooks. Atlantic mackerel was the bait of choice. We cut each fish into three equal size chunks until we had enough to prepare 100 hooks. The bait was applied to the hook by passing the hook completely through the bait and then re-puncturing and passing the hook completely through again to ensure that it was secure.

The set began by deploying a buoy, known as a high-flyer, which was attached to the main line. Approximately 300 feet of line was let out and then two 20-pound anchors were attached to ensure the line was on the bottom. The first hook was about 100 feet from the anchors, with another hook approximately every 60 feet thereafter. Additional anchors were set after the first 30 hooks and again after 70 hooks. After all 100 hooks were set out two more 20-pound anchors were attached to the line along with another 300 feet of line and a second high-flyer buoy. The whole setup resembled a giant trotline. The line was allowed to fish for one hour before we returned to the first high-flyer to retrieve it.

Setting hooks was challenging at first since the technique required proper positioning and timing. The baited hook was attached to a 9-foot leader and a clip that attaches to the main line. The hook, line and clip are collectively called a gangion. The challenge was removing a gangion from its storage barrel, tossing each baited hook over the back of the boat while avoiding getting hooked, and clipping the gangion to the main line at just the right time to maintain the proper hook spacing. The entire longline deployment required fast but safe execution and constant focus. Many potential hazards exist that are not easily recognized at first glance.

Retrieval seemed like a never-ending dream with sharks of all types and sizes that I have never seen. Fish and shark species were brought on board, identified and measured. Larger sharks were left in the water to protect their internal organs and reduce stress for both fish and crew. Lengths for larger sharks were estimated using graduated markings painted on the side of the vessel. Weights for smaller sharks and fish were recorded using hand held scales. Sexing sharks was performed by checking for claspers which extend directly off the pelvic fins of males. As many sharks as possible were tagged before being released. The tags help track movement and growth of sharks if they are recaptured. Organisms observed on this trip included the Atlantic stingray, Atlantic sharpnose shark, blacktip shark, spinner shark, finetooth shark, and scalloped hammerhead.

A feisty finetooth shark put up quite a fight as I pulled it aboard and quickly moved to gain control of its thrashing. I learned that sharks are much stronger than they look! The blacktips landed seemed to be relatively calm once aboard, which made data collection go smoothly. An agile spinner shark was quite a sight to see. Spinner sharks are often confused with the blacktips due to the black markings on their dorsal fins, but a spinner has a black tip on the anal fin whereas the blacktip does not. The big catch of the day was a beautiful male scalloped hammerhead measuring 8.1 feet!

All good things quickly come to an end. Before I knew it, the day's work was done and we were headed back to the dock. This research cruise as well as the rest of my summer internship was indeed a dream come true for me as it was a chance to participate in research crucial for the management and protection of one of the Gulf of Mexico's most misunderstood natural resources, the shark.