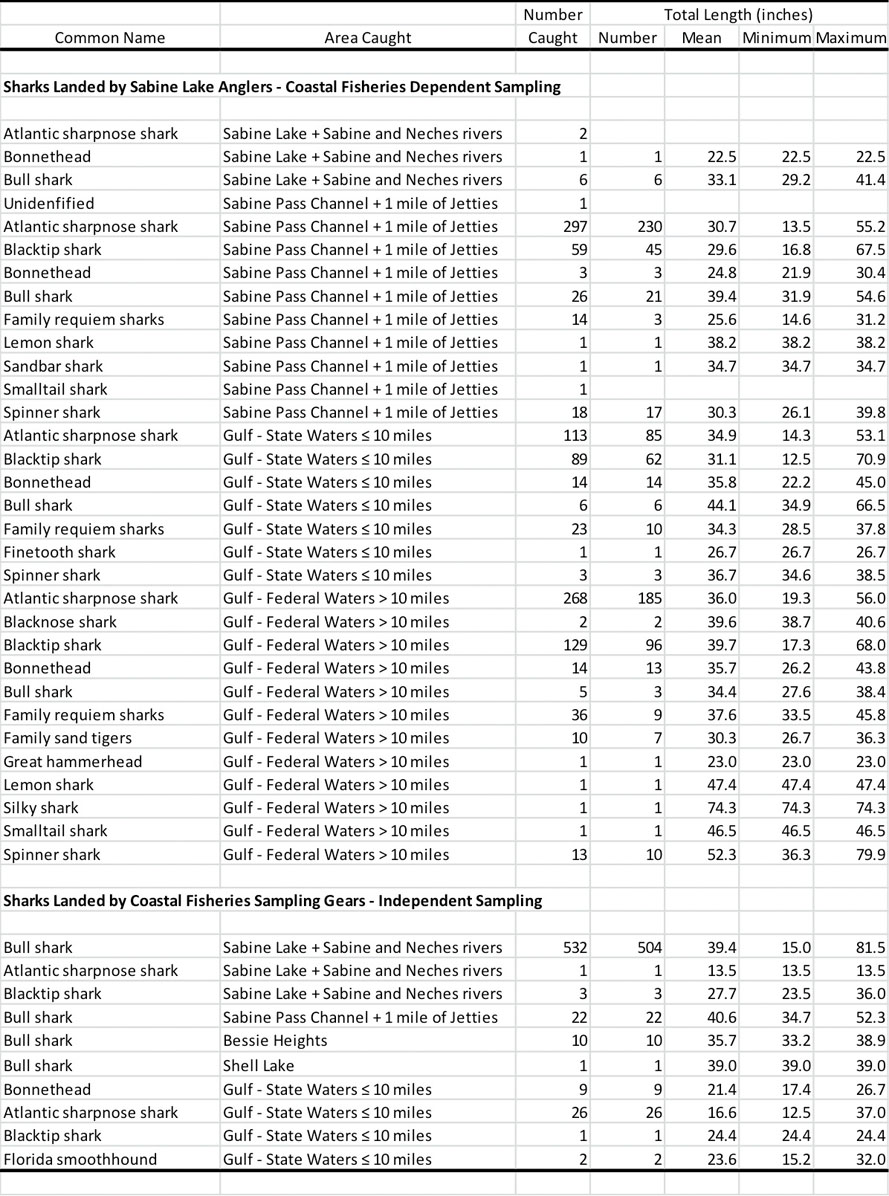 Numbers and total length summary for taxa of sharks landed by Sabine Lake anglers (May 1987 - Nov 2014) and Coastal Fisheries sampling gears by area caught.
Texas coastal anglers often target red drum, spotted seatrout, and southern flounder, often called "The Big Three." For those making fishing a regular outdoor activity, sooner or later they will find there are many more fish which will bring new appreciation of Texas resources. Surely one of those would be catching and landing one of several species of coastal sharks. At times, Sabine Lake anglers targeting sharks closely matched those trips targeting "The Big Three."

Sharks caught in the Sabine Lake system were part of the landings for 512 out of 32,710 intercepted fishing trips (1%), 64 of which targeted shark species (May 1987 Nov 2014). Of the 512 trips, 427 anglers landed sharks while landing other fish. Those trips targeting sharks were taken mostly by sport anglers (63), 1 was taken during a guided trip, while none were taken by tournament anglers. Only 19 trips of the 64 actually landed sharks.

All sharks were caught using rod-n-reel, except for a smalltail shark taken with a fly rod somewhere in the Sabine Pass Channel which includes a 1-mile radius around the Sabine Pass Jetties (the SBC+J). Anglers landing sharks baited their hooks mostly with squid, live fish, or dead fish. Dead fish was the top bait in both state and federal waters, while live fish caught more in Sabine Lake including the Neches and Sabine rivers (Sabine Lake/Rivers).

Before September 1991, a period of no shark regulations, there were 334 sharks landed (May 1987- August 1991). Regulations came about in an attempt to provide increased protection to shark species from overfishing because of the time required for them to reach maturity and their low birth numbers.

The first shark regulations were introduced in September 1991, remaining in affect through August 2000–allowing 5 of any species of any length. Sabine anglers in 199 trips landed 499 sharks divided among six species with no bag limit violations.

The next shark regulation change came in September 2000, lasting until August of 2009, with a bag of 1 of any species with a minimum total length of 24 inches (610 mm). During this period there were 141 trips (11 targeting sharks) in the Sabine Lake area landing 243 sharks among 12 species. One trip surpassed the allowed possession limit with one angler landing 5 sharks, which may indicate a lack of knowledge of the change in regulation. Of the 243 landed sharks, 9 sharks missed the minimum length which included 7 Atlantic sharpnose (21.5 23.7 inches), 1 blacktip (23.3), and 1 bonnethead (22.5).

Since September 2009, shark regulations have been divided into 3 groups (2 length groups, 1 prohibited group) with a bag limit of one for the length groups, while sharks in the prohibited group limited anglers to catch-and-release only. During this period 52 trips landed 84 sharks among 5 species. Atlantic sharpnose sharks (60) were most often landed by Sabine anglers, followed by blacktip sharks (11). Majority of the trips landing sharks were below the daily bag limit, however 13 trips met the daily bag limit, with1 trip meeting the possession limit. There were no bag limit violations. Eleven of the 78 sharks measured missed the minimum length requirements, 3 of the 53 Atlantic sharpnose sharks (20.1 23.3 inches), 6 bull sharks (29.2 44.3), and 2 spinner sharks (26.8 36.3).

From the above discussion, a Sabine angler should have plenty of opportunity to catch a shark inshore or nearshore before even thinking of going greater distances offshore. Now landing a shark of legal size is the next question. Under current regulations, CF sampling indicates catching and landing the most common shark in the Sabine Lake system, a bull shark, is a rare event for most are neonates-early juveniles <64 inches, only one of 565 met the length limit at 81.5 inches (Late Juveniles Subadults) caught south of Johnson Bayou in Sabine Lake.

In the first years of regulation (Sept 1991 - Aug 2009) identification was not a major issue. However, since September 2009 shark identification has become more important. Shark identification is very challenging, even for biologists. Anglers would benefit by reviewing shark identification at either of the two web sites referenced below. The NOAA publication provides a key which uses a number of characters to separate allowable and prohibited sharks. If there is doubt about the identification of a shark, simply release it. Anglers with smart phones may like to keep these links ready for use. Others may like to print and store copies in your boat or tackle box for easy reference when landing sharks. Now that you have identified your landed shark, how should one go about cooking your catch? Check your internet browser for there are numerous ideas.