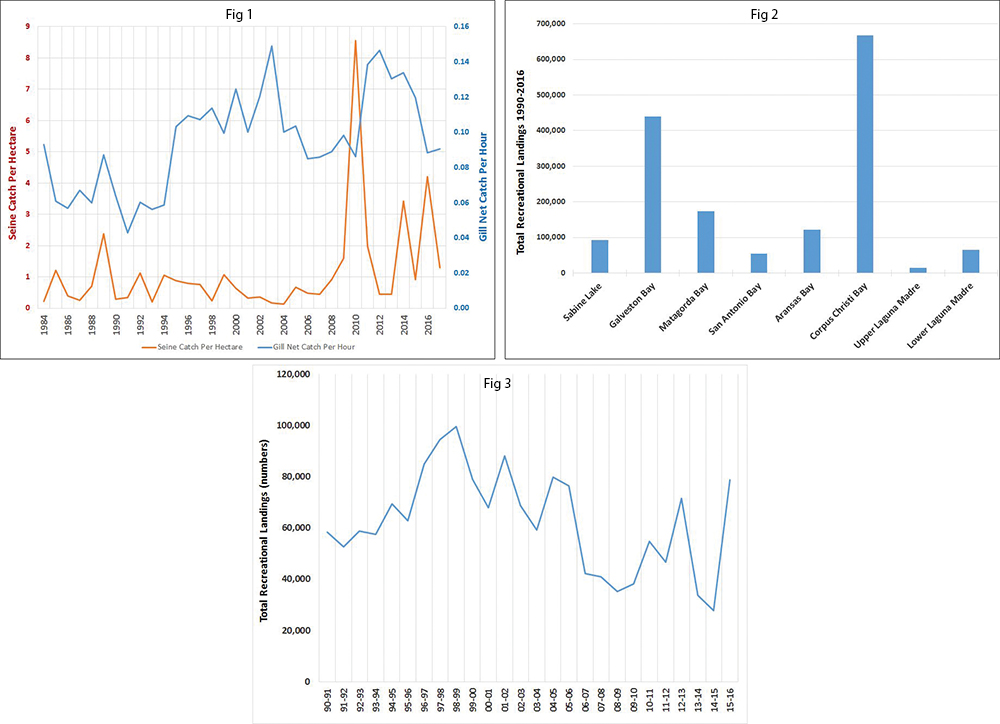 Sheepshead, also known as convict fish because of the dark stripes on their sides, are a moderately sought after or supplemental fish species harvested by anglers fishing in Texas bays and estuaries.  During the early springtime, anglers will target them around jetties and fishing piers when they are on their way to shallow offshore spawning grounds. For the remainder of the year, anglers catch sheepshead in estuarine waters on oyster reefs, seagrass, and structures like oil rigs or boat docks/piers.  This member of the Sparidae family, commonly referred to as porgies, ranges from the coasts of Nova Scotia south to Brazil but do not occupy areas around the Caribbean Islands.  They are a very sporting species to target with rod and reel, and make excellent table fare.  Texas sheepshead populations have fared well over the last 25 years with catch rates increasing in Texas Parks and Wildlife Department (TPWD) gill net surveys.

Unlike southern flounder, a relatively short-lived species typically surviving only about 3-6 years in Texas, sheepshead have the ability to live 15-20 years in the northern Gulf of Mexico.  Males and females have very similar growth rates with maximum sizes around 25 inches and over 5 pounds.  Sexual maturity occurs at 2-4 years of age for both sexes.

When warm fronts reach the Texas coast during early spring, these mature sheepshead start migrating toward Gulf of Mexico passes for spawning around offshore reefs and artificial structures.  The months of March and April are when the majority of sheepshead migrate out the passes in groups.  They are known to spawn in the nearshore Gulf but may also spawn in or near the passes as well.  Spawning may occur multiple times during the spring season with thousands of eggs released per event; with the average batch of eggs released being greater than 45,000 eggs.  Some of the adults return to inshore waters while others stay offshore for the remainder of their lives. Tides, currents, and wind carry juveniles through Gulf passes into the various Texas estuarine systems and habitats. Soon after arriving in the estuary they settle into marsh and seagrass nursery habitats.  To monitor the success of this reproduction, and the survival to larger sizes, the TPWD developed an extensive monitoring program using gill nets, seines, other gears, and recreational landings.

Since the banning of commercial netting in 1988, the adult sheepshead population has increased in TPWD gill net surveys with peaks in 2003 and 2012, and dips in the early 90s and 2000s (Figure 1).  TPWD bag seine catch rates for sheepshead were steady for many years, but in the last seven years it has been exceptionally good.  From years 2009-2015, there were three years that had historically high reproductive success especially 2010 (Figure 1).  Sheepshead are harvested all along the coast of Texas with Galveston and Corpus Christi bays accounting for the majority of landings since 1990  (Figure 2).  According to the total estimated recreational landings of sheepshead, there has been an overall decrease in landings from the late 90s to recently (Figure 3).

Sheepshead are not a highly sought after estuarine fish species like the big three (spotted sea trout, redfish, flounder), but they are ecologically important, fun to catch, and taste great.  Their distinctive characteristics of goat like teeth and black vertical stripes are engrained into the minds of anglers that catch them for the first time. Anglers should add them to their list of targets next time the big three are hard to come by.