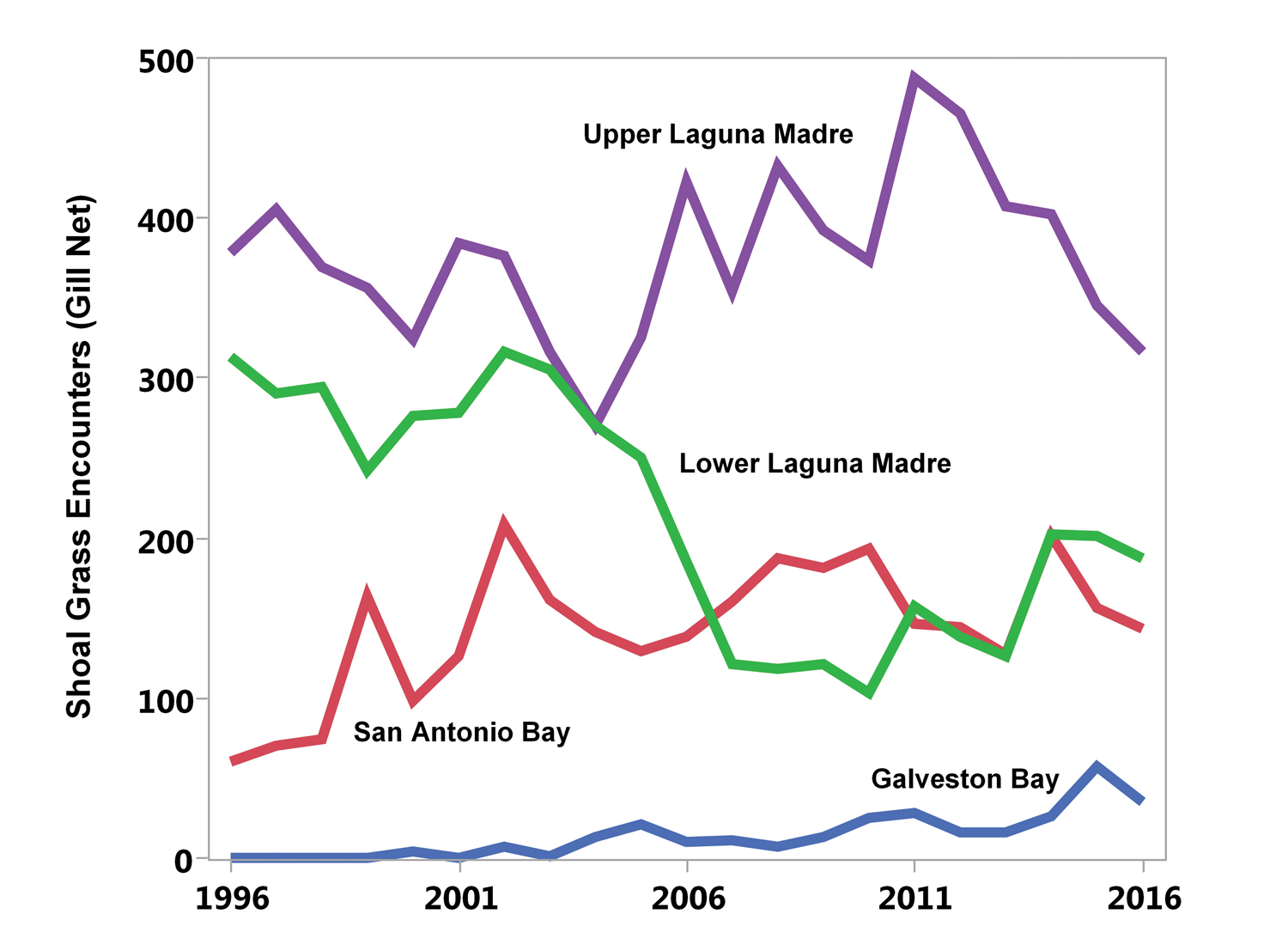 The next time you’re wading or paddling through your favorite fishing spot along the Texas coast, take a closer look at what is growing in the shallow, calmer waters along the edges of the bay.In addition to oysters and other mollusks, you will probably find seagrass. Texas has been blessed with several species of seagrasses spread throughout the coastal waters of our state.Though not true grasses, seagrasses are true flowering plants and usually appear similar to grasses on land with their long, slender leaves often growing in large underwater meadows like a grass. There are five species that you may encounter in our saltier coastal waters.They are star grass (Halophila engelmannii), manatee grass (Syringodium filiforme), turtle grass (Thalassia testudinum), shoal grass (Halodule wrightii), and widgeon grass (Ruppia maritima).

The most common and abundant seagrass found along the Texas coast is shoal grass.It is found in every Texas bay from the south shorelines of West Galveston all the way down to the border with Mexico in the Lower Laguna Madre.In fact, a quick look at the TPWD coastwide monitoring program confirms this distribution.Interestingly, the data also does a good job of reflecting the general patterns of abundance for this species across the bays.For example, the number of shoal grass encounters is greatest in the upper and lower Laguna Madre where it is most abundant.The data also show an increasing rate of encounters in San Antonio and Galveston Bays where this species has recovered in abundance over the last 20 years.

Shoal grass has long, thin, flat, medium to dark green leaves that are usually 12 to 18 inches long, 1/16 of an inch wide, and paper thin.They grow from a shallowly buried stem, called a rhizome, like many true grasses do, usually with two or more leaves emerging in branches at intervals along the length of the rhizome.It is not unusual to find it growing in shallow waters that get exposed during low tides but can also be found growing to depths of six feet if the water in the area stays clear enough. At first glance, shoal grass can sometimes be confused with widgeon grass or manatee grass.However, the difference with manatee grass is easily determined because manatee grass has round, cylindrical leaves, while shoal grass has flat ones.Widgeon grass can be harder to distinguish, but a trained eye will note the pointed leaf tips on widgeon grass versus the flat or lightly toothed ones for shoal grass, and see that widgeon grass leaves are much more complex in their branching, while shoal grass usually has only a few long leaves in a simple branching pattern.

Shoal grass is a favorite habitat for many species of fish and shellfish.These animals rely on seagrass, particularly in their early life stages, as a place of refuge from predators and as a source of food.They may feed directly on the seagrass, on the algae and other organisms that live directly on its leaves, or on the other critters that live in its meadows.For this reason, these meadows attract larger predators such as spotted seatrout and red drum.

Avid duck hunters may also know that shoal grass is a favorite food for many waterfowl that visit the Texas coast each winter from the north.In particular, the Laguna Madre of Texas and Mexico is well known as the primary wintering ground for the redhead duck (Aythya americana).This is primarily due to the abundance of shoal grass found in these shallow waters that the ducks feed on as they overwinter.Winter aerial surveys conducted by the U.S. Fish and Wildlife Service as recently as 2011 and 2012 revealed that 250,000 to over 500,000 redheads spend their winter in the U.S. portion of the Laguna Madre.

Overall, shoal grass and other seagrass populations in Texas appear to be stable, but as with all our natural resources, they do face some threats.Hurricanes and tropical storms can cause direct losses from the scour and erosion that occur during these events.Prolonged periods of unusually high freshwater inflow after these events can also reduce salinities for so long that seagrasses cannot survive.Human activities can also threaten seagrass populations.Factors such as reduced water clarity due to dredging, poor land management, and increased nutrient pollution can cause shoal grass to decline or even disappear from our coastal waters.

Anything we can do to reduce the impacts we have on seagrass meadows will go a long way toward insuring seagrass survival. Many fishermen know that they can have a direct, negative impact on seagrasses and try to avoid digging them up with their boat propellers.Known as “prop-scars,” these gouges into the seagrass meadow can take up to a few years to heal. If too many of these prop scars proliferate in a heavily used area, the meadow can actually die the “death of a thousand cuts” where they are damaged to the point that the seagrass meadow dies out. To reduce this damage, the Texas Legislature passed a law in 2013 which makes it a Class C misdemeanor to uproot seagrass with a boat motor propeller.

So, the next time you’re out on the bay for a day of fishing or other recreational activities, remember to lift, drift, pole, and troll through and over our precious seagrass meadows. Then take a few minutes to look along the edge of the bay and see if you can find shoal grass, our most common seagrass species, growing along the edges of the bay providing habitat for some of our most favorite fish and shellfish.

Next month Jan Culbertson will talk about some of the great marsh restoration work that TPWD is doing.