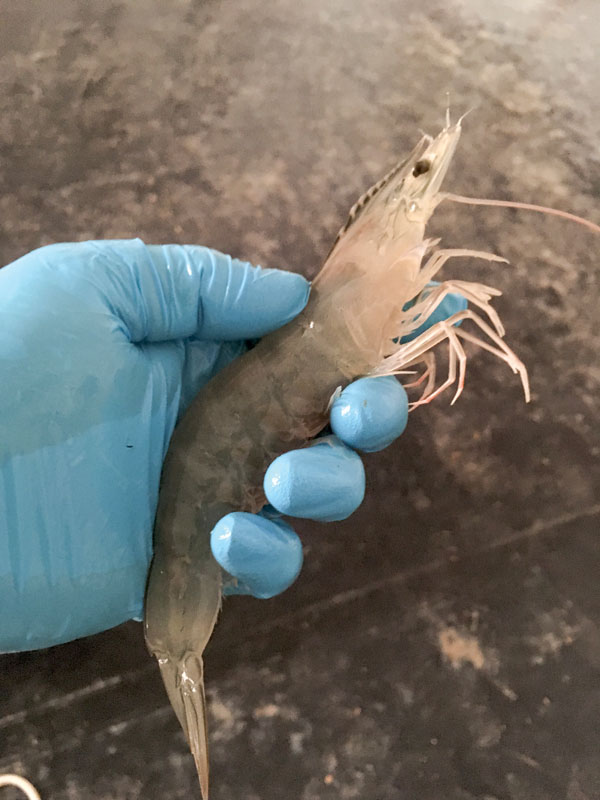 Exotic shrimp species are preferred over native shrimp by the industry because they have faster growth rates, are more disease resistant, and larval availability/supplies from commercial shrimp hatcheries are well established in Texas, Florida and Hawaii. Currently, TPWD allows only 2 species of exotic shrimp to be cultured in Texas, the Pacific white shrimp (Litopenaeus vannamei) and the Pacific blue shrimp (L. stylirostris). The Pacific white shrimp may be pond cultured anywhere on land. However, the Pacific blue shrimp may be cultured only on a case by case basis and after extensive review, and then only outside of the TPWD designated exclusion zone. This exclusion zone encompasses the area adjacent to the Texas Gulf coast south of State Highway 21 and east of Interstate Highway 35, but excludes Brazos County. This exclusion zone was created to ensure exotic shrimp would not make it back to the coastal marine waters if there was an escape from an inland culture facility.

To protect our native coastal resources, and the consumer's safety, exotic shrimp culture must be conducted in the most environmentally friendly manner possible. To achieve this level of protection Texas does not allow the use of any chemicals or anti-biotics during any stage of shrimp culture, nor does it allow exotic shrimp to be cultured in open bays or offshore waters. Because of the public marine waters prohibition, all Texas shrimp farms utilize man-made ponds to culture the shrimp. With two exceptions all of these shrimp farms are located near the coast. The two exceptions are located west of Raymondville and west of San Antonio, and both pump brackish groundwater to rear their shrimp. By conducting routine shrimp health examinations during the production season the TPWD inspection program ensures that exotic shrimp raised in Texas are healthy and disease free, and the environment is afforded the maximum protection allowed by current law.

On most shrimp farms, shrimp are cultured in outdoor five-acre ponds which are filled with brackish groundwater or seawater from a local bay. To prevent escapement of an exotic species each outdoor pond must be equipped with three screens at the discharge area to contain the smallest size shrimp being cultured at the time. As shrimp grow in size, the screens cans be replaced with larger mesh screens to accommodate water exchange. High-density mariculture such as this can lead to fouling of pond water with suspended solids, and a general decrease in water quality. In the 1990s ponds were set up with flow through systems to keep the water fresh and clean. This flow through model has been replaced with recirculation systems to reduce discharges into public waters. To remove suspended solids and other impurities water can be cycled through a pond system via canals, or passed through a man-made wetland. The canals and wetlands help clean the water by allowing the suspended solids to settle out so the water can then be recirculated back into the ponds or released back into the bays. Before effluent water can be released into the bays, water quality standards imposed by TCEQ must be met. The shrimp farms must adhere to strict effluent discharge water quality standards to protect the natural environment. Each facility has its own standards and daily discharge amounts to follow.

Another shrimp culture method, which is fairly new to Texas, is the use of total recirculation and zero discharge systems by some of the shrimp farms along the coast. One of the shrimp farms, Global Blue Technologies, which utilizes this zero discharge method is near Rockport, Texas. This facility boasts four long, air filled, plastic domes 1,155' X 155'. Each one of the domes houses eight, plastic lined ponds for raising shrimp with each pond measuring about 130' X 130'. These domes are rated to withstand gulf coast hurricanes but can also be deflated for less wind resistance during the storm. This particular facility is located near Port Bay, in the Aransas Bay system. Initially, this facility started production in Port Isabel in 2011 as a pilot project with operations going well enough to establish a commercial operation near Rockport in 2014. Since this facility is an indoor operation, it can produce shrimp year round, whereas the outdoor facilities are in production normally from late March to early November. By being an indoor, greenhouse type facility, it can culture a larger shrimp in a shorter amount of time due to the year-round warm temperatures inside the dome structures.

Shrimp production for the last several years has been about 3,600 lbs. /acre across the board for all commercial shrimp farm operations in Texas. Since 1991, Texas shrimp farmers have produced approximately 106 million pounds of farm raised shrimp. However, this is a small amount in comparison to the 100s of millions of pounds imported into the United States annually.