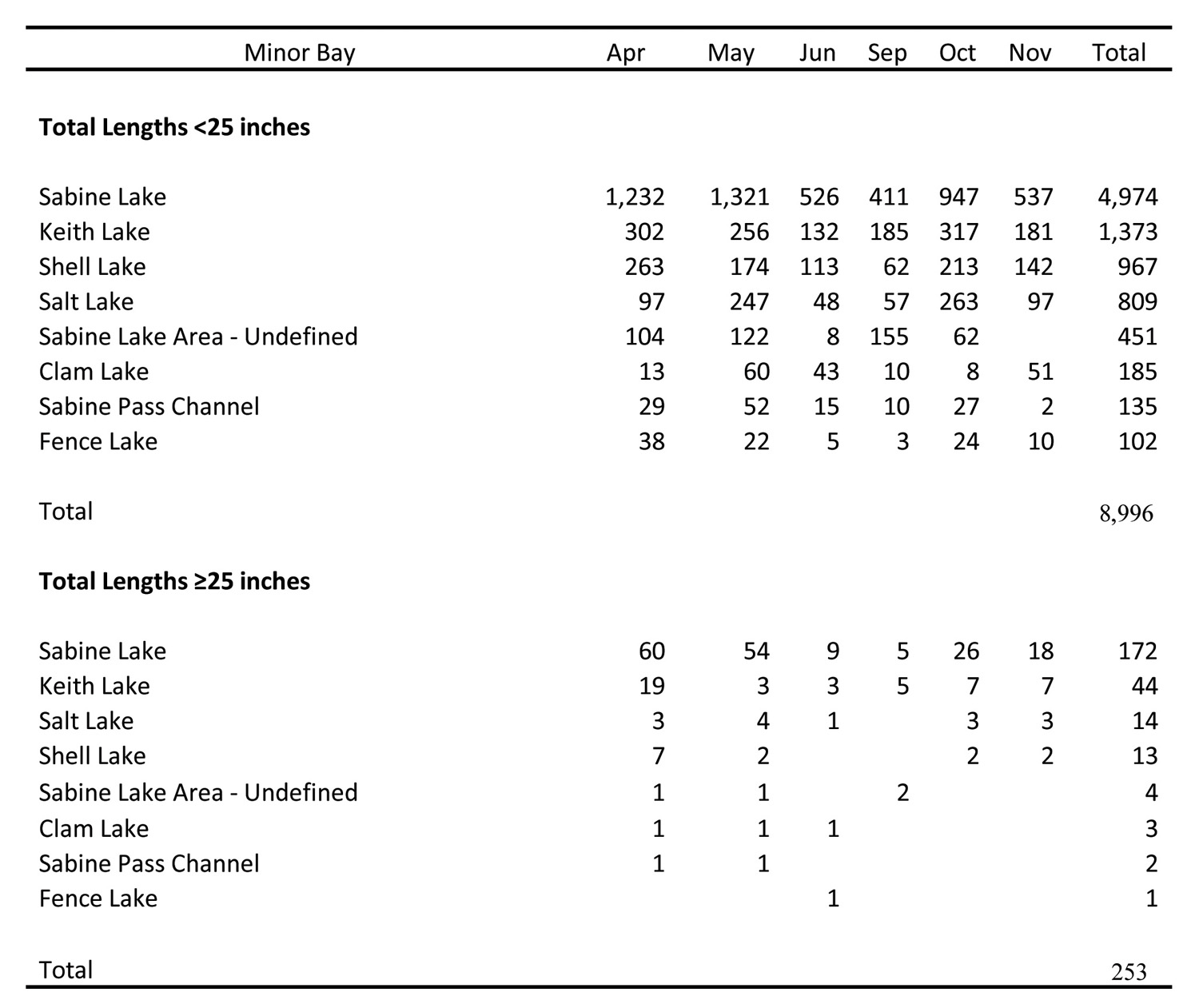 Along the Texas coast, spotted seatrout, Cynoscion nebulosus, are arguably the most highly sought after game fish, and the anglers of Sabine Lake are lucky to have fertile waters with the capacity to support a thriving population. Two important questions that anglers ask themselves before seeking their bag limit of this popular game fish are “Where are the fish likely to be?” and “What are they biting on?” Knowledge of habitat, tides, time of year, recent weather trends, and bait are also essential parts of that decision process. Though they are not collected for this purpose, data collected by Texas Parks and Wildlife Department (TPWD) coastal monitoring programs may also be useful to anglers targeting specks in the Sabine Lake estuary.

One of these monitoring programs, the fishery-dependent program, involves collecting post-trip information from anglers at boat ramps and marinas. Many of you are no doubt already familiar with this program having been interviewed by TPWD staff after a fishing trip. Since 1986, when this program began in the Sabine Lake system, 47,760 angler interviews have been conducted. Today 30 boat access sites are surveyed year round. TPWD data shows that Sabine Lake and the Sabine Pass Channel are where anglers land the most spotted seatrout, with more than 25,000 specs recorded from those areas over the last three decades. Of the trout encountered during surveys from Sabine Lake and the surrounding marsh and Gulf, most hover around 16-17 inches, but it is interesting to note that many trout over 18 inches were found in Federal waters (>10 statute miles offshore) off Sabine Pass. However, if you happen to return to the ramp without so much as a bite don’t worry because it happens to even the best anglers. In fact, only 55% of fishing trips that were surveyed along coastal Texas over the last 40 years brought back any fish.

A second TPWD coastal program that produces data of interest to anglers is the fishery-independent program. This program employees gill nets, in the spring and fall, to monitor populations of larger fish, including spotted seatrout. This data suggests that Sabine Lake supports a large population of spotted seatrout that is comprised of fish covering a wide size range (Table 1). The marsh surrounding Sabine Lake and its smaller nooks such as Keith, Salt, and Shell Lakes are also areas where you can find an ample supply of specks, something to consider on those less than perfect-weather days or if you want to explore and get away from the open water of Sabine Lake.

Time of year and location also plays a role in the availability of spotted seatrout. Fishery-dependent data indicates that action picks up in mid-spring, peaks in the summer, and remains steady through November. The most aggressive bite seems to change from Sabine Lake proper to the Sabine Pass Channel as the seasons change from spring to summer. The data also suggests the most successful bait varies seasonally with worm jigs being the most reliable in the earlier months of the year (March-June) then transitioning to live fish and shrimp as the preferred choice around June through August. Of note is a late year burst of activity back in Sabine and Keith Lakes when the specs seem to take both live and artificial baits.

Anglers fishing in the Sabine Lake system may be aware that the Sabine River, Sabine Lake, and Sabine Pass Channel follow the boundary between Texas/Louisiana. Anglers fishing in these areas should be familiar with the regulations of both states to prevent law enforcement problems. You can find annual guides with updated state-specific regulations at the web pages listed below.Check the weather, time of year, decide on a boat ramp launch location, pack your rod, select your bait and you should be ready! Oh, bring a friend fishing! Be safe! Consider leaving a note of your trip plans, for those cell phones often lose power at the wrong time! Enjoy and please use wisely the fishery resources of the Texas Gulf coast.

Next month Joel Anderson will bring us up to date on how Texas snook are doing.