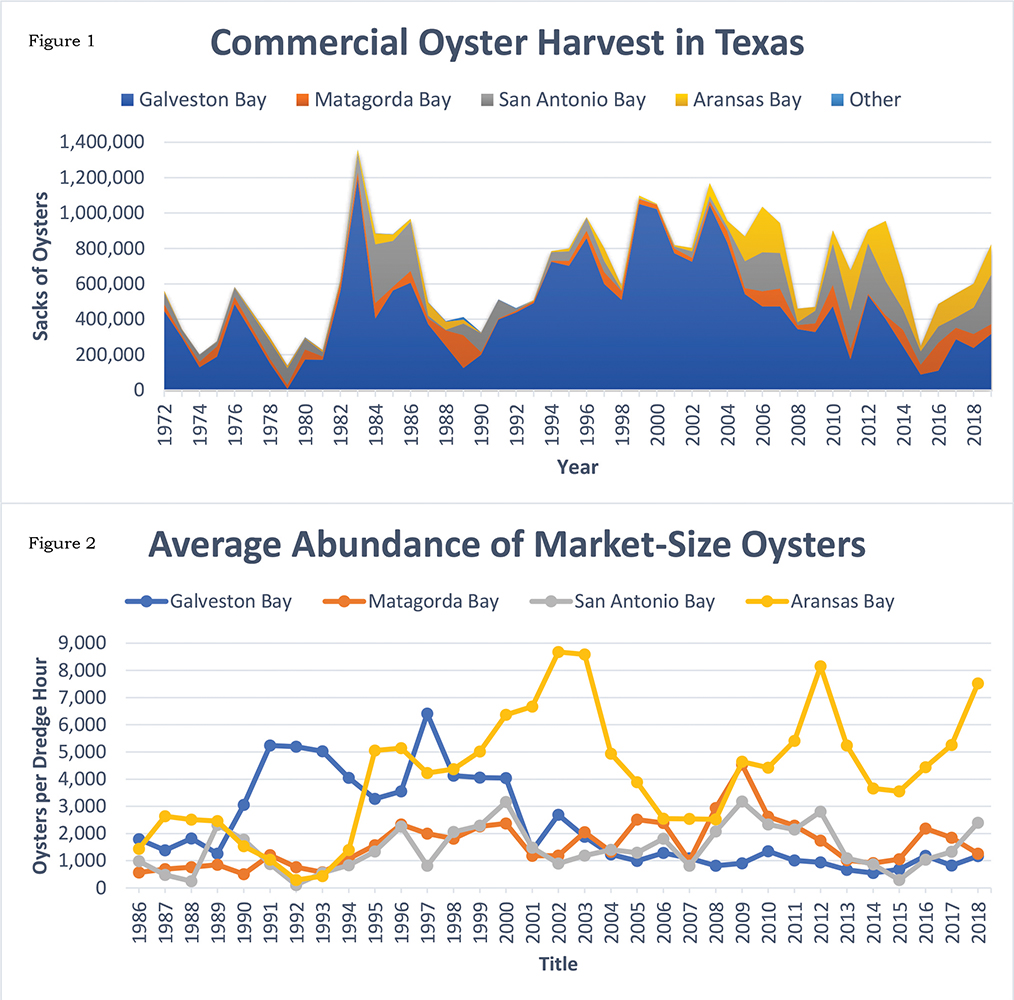 Oyster reefs play a vital role in both the ecosystem and the local economy. They help clean the water with a single oyster able to filter 50 gallons of water per day. Oyster reefs also protect shorelines from erosion by breaking up wave energy and provide habitat that supports a unique underwater community providing shelter and feeding opportunities for a thriving ecosystem. Each of these functions enhance sportfishing opportunities for recreational anglers.

Oysters are also an important food source for humans. Few Texans harvest oysters recreationally, but oysters are one of the top commercial fisheries in the state. In 2019, a total of 823,724 sacks of oysters brought in a dockside value of $33.5 million and provide numerous job opportunities in local economies.

The primary oyster-producing bays are on the middle and upper Texas coast with Galveston, Matagorda, San Antonio, and Aransas bays supporting commercial fisheries. The trends in commercial oyster harvest have changed dramatically over time. Historically, Galveston Bay made up the bulk of the landings, averaging 74 percent of the total harvest per year from 1972 to 2009; however, over the last 10 years, that number has dropped to 41 percent with commercial harvest from the southern bays increasing since the early 2000s (Figure 1).

As seen in the commercial data, Texas Parks and Wildlife Department’s own data also shows that the abundance of oysters large enough to harvest (3 inches or greater), sometimes referred to as “market oysters”, has also declined in Galveston Bay since the early 2000s (Figure 2). Improvements were observed in San Antonio and Aransas Bay where market oyster abundance increased in recent years.

Texas oyster reefs have had multiple stressors over the past several decades with Galveston Bay experiencing some of the most severe conditions. The act of fishing itself removes oyster habitat that oyster larvae and other creatures rely on. In 2008, Hurricane Ike dealt a major blow to the reefs in Galveston Bay by burying large areas of reef with sediment. One of the worst droughts on record peaked in 2011 and caused reduced freshwater inflow and increased salinity. Increases in salinity cause an increase in the number of predators such as oyster drills, crabs, and fish known to feed on oysters. In addition, a disease known as Dermo is more of a problem for oysters under salty conditions. In recent years, reduced abundance in the other gulf states has increased the seafood market’s demand for Texas oysters.

The Houston area experienced record flooding in recent years during the Memorial Day flood (May 2015), Tax Day flood (April 2016), and Hurricane Harvey (August-September 2017), which added insult to injury for oysters in Galveston Bay. Each flood caused localized mortality, but Hurricane Harvey caused extensive mortality throughout Galveston Bay. The shallow reefs of East Galveston Bay and reefs off Eagle and Dollar points saw the highest mortality, averaging near 85 percent, while reefs in the middle of Galveston bay in deeper areas fared better, averaging only 25 to 48 percent mortality.

What are Fishery Managers Doing to Help?

The Texas Parks and Wildlife Department began using a new precautionary management strategy in 2015 to improve the long-term sustainability of the oyster fishery. This method examines the abundance of market-sized oysters and the percent of undersized oysters to determine if an area has been depleted and if it should remain open or closed for harvest.

In recent years, both the legislature and the TPWD Commission have passed several rules and regulations to minimize the impact of fishing on the resource including eliminating fishing on weekends, reducing harvest limits to 30 sacks, increasing penalties for fishing in closed waters and establishing a license buyback program to eventually reduce the size of the fleet.

An effort was also made to lessen the harvest of undersized oysters by reducing the tolerance from 15 to five percent and significantly increasing the penalties for harvesting undersized oysters for both fishermen and the dealers. Oyster reefs within 300 feet from shore have also been closed to both recreational and commercial harvest to protect intertidal oyster reefs and adjacent marsh habitat. Additionally, six environmentally sensitive bays were closed to any oyster harvest.

Because oyster habitat is removed from the water when oysters are fished, many areas that have experienced a heavy amount of fishing pressure are lacking adequate substrate. Substrate refers to a suitable material for oyster larvae to settle on and grow into an adult oyster. Texas waters are thought to produce plenty of oyster larvae, but these larvae do not always have enough substrate on which to settle. Thus, TPWD has focused a lot of effort on restoring degraded and lost oyster habitat.

In the past, TPWD did not have a regular source of funding available for restoring oyster reefs. Instead, TPWD relied on periodic donations, grants, and disaster relief assistance to restore Texas oyster reefs with most of that effort focused in Galveston Bay. In 2017, legislation was passed that required oyster dealers to plant oyster shell or other suitable material equal to 30 percent by volume of oysters purchased from fishermen or pay a fee so that Texas Parks and Wildlife could plant material on their behalf. In addition to providing a regular source of material, this makes it easier to restore reefs in other bay systems. To date, a total of 1,720 acres have been restored with additional acreage being added every year.

The Future of Oysters in Texas

Since the start of these new management strategies, regulations, and increased restoration efforts, TPWD has seen an increase in abundance of market-size oysters in our sampling in Aransas and San Antonio Bays (Figure 2). Given time and assuming mother nature gives our state a break, TPWD is optimistic that we will see additional increases in oyster abundance over time.

The Texas Parks and Wildlife Department is also investigating new sampling techniques to combine with our ongoing mapping efforts to obtain better estimates of sustainable levels of harvest that are appropriate to maintain the overall health of Texas oyster reefs for generations to come.