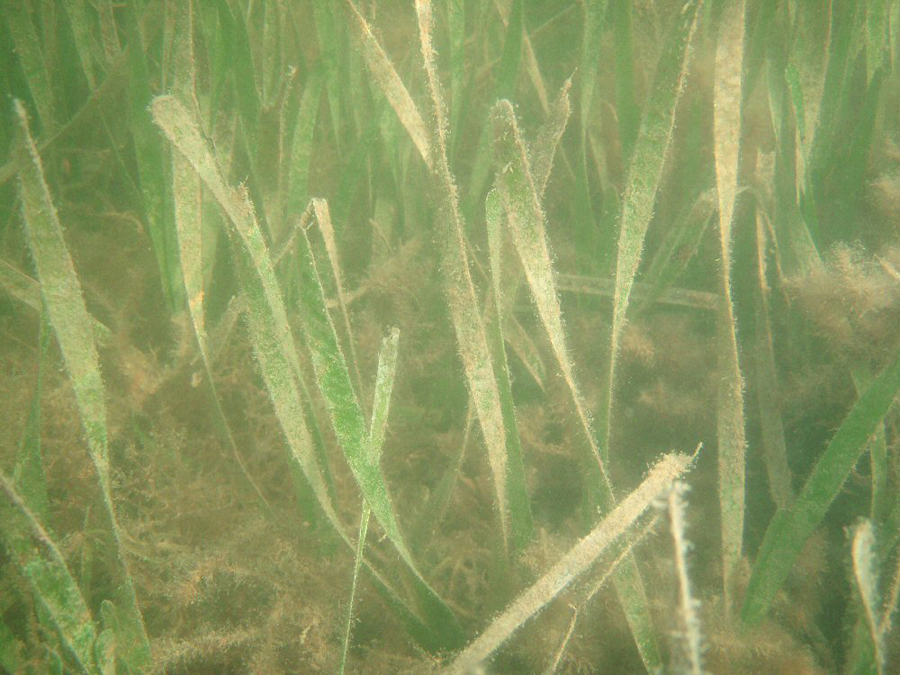 Turtle grass, found mostly from Aransas Pass southward, is very important where it exists; not only as direct forage for some avian and marine organisms, but also as host for algae and other epiphytes (organism that grows on a plant).
Seagrass seems to be a common buzzword among coastal anglers these days, and with good reason. Where they exist, seagrass meadows provide one of the most important and productive habitats in all of the world's oceans. The simple truth is that seagrass meadows are the nursery, the grocery store, and the roof over the head for many of our most important marine species. However, these shallow water grass flats are also relatively fragile, and subject to numerous man-made threats.

Losses of seagrass around the world and in Texas bays are well documented. When the habitat that supports any population of animals declines, eventually so will that animal population. Since seagrasses help produce good fishing, it's the responsibility of Texas Parks and Wildlife Department (TPWD) to help maintain them, and thus the best possible fishing quality for the citizens of Texas. That's why multiple TPWD biologists are looking at seagrass meadows from different perspectives.

For example, aerial photography can be used to look at landscape features such as seagrass beds in a variety of ways. From high altitudes, large-scale changes in the total acreage of seagrass coverage can be detected. TPWD coastal ecologist Dr. Jim Simons is currently working with the National Oceanographic and Atmospheric Administration using aerial imagery taken at very high altitudes to assess changes in total seagrass acreage from San Antonio Bay to the Rio Grande. That's one perspective for looking at seagrasses. A similar perspective is being used by Galveston Bay biologist Leslie Williams, where aerial imagery is taken at lower altitudes, with finer resolution, to assess recent changes in the Texas's most isolated, remnant seagrass bed in Galveston Bay. The Galveston Bay complex is vast, and because it is so big, produces more recreational and commercial landings of marine organisms than any other bay in Texas. With approximately 98% of the Gulf of Mexico's landings being estuarine dependent, the loss of prime nursery habit such as seagrass beds could have significant impacts on recreational and commercial fisheries.

Historically, by the late 1970's seagrass in Galveston Bay had almost entirely disappeared due to dredge-and-fill activities, boat traffic, subsidence, erosion, storms, and waste water discharges. Christmas Bay is one of the most productive and least disturbed minor bays within the Galveston Bay complex and became a priority conservation site for state resource management programs. In 1988 TPWD and the General Land Office designated Christmas Bay an official State Coastal Preserve and State Scientific Area. In 1989 it was estimated that only 700 acres of submerged aquatic vegetation still existed in Galveston Bay with approximately 386 acres in Christmas Bay and the remainder along Trinity Bay.

In 1998 Dr. Warren Pulich conducted a mapping project to determine the status of seagrass in Drum and Christmas Bay using aerial photography and geographic information system (GIS) software. The results showed that seagrass in Christmas and Drum Bay covered approximately 424 acres and that Christmas Bay contains four of the five seagrass species found in Texas. Most often found are mixed shoal grass (Halodule beaudettei) and clover grass (Halophila englemanni) beds, with widgeon grass (Ruppia maritima) becoming abundant in the spring and fall and interspersed patches of turtle grass (Thalassia testudinum) along the south shore. To determine the present status of seagrass in Christmas and Drum Bay, new aerial photographs were taken in December 2005 and are being compared with the 1998 photographs. This work will evaluate trends in seagrass coverage over the past six years within this coastal preserve, including changes in acreage, patchiness, and whether a shift in the types of seagrass present has occurred.

One hundred fifty miles south of Galveston, the Redfish Bay State Scientific Area (RBSSA) located between Rockport and Port Aransas is another important seagrass area. In fact, Redfish Bay is truly a "Texas treasure" for many reasons. It is an ecological convergence zone, a place where the extensive seagrass beds of the lower coast meet the tail end of the magnificent oyster reef complexes of the middle and upper coast, creating a diversity of habitat that is one of the premier inshore marine nursery areas in Texas. In addition, this nursery area is only 1.5 miles from the major water exchange with the Gulf of Mexico at Port Aransas. Half of all economically important marine species spawn in the Gulf near passes, and depend on tidal water flow to transport juveniles into the bay to suitable habitat where they can settle out, grow up, replenish their populations, and support a fishery while doing so.

Another item to consider is that Redfish Bay receives more boating and fishing pressure per acre than any other coastal bay. The RBSSA is a small piece of the coast, only 32,000 acres, but has 3 times more summer weekend anglers from Bexar County alone than it does residents from all of the Coastal Bend. That doesn't even include visitors from Houston, Dallas, Austin and other points of Texas. Obviously, Texans recognize a good place to go when they see it. The area is beautiful, has prime fishing opportunities, can be reached in less than a half days drive for many Texans, and has great beaches, other cultural resources and things to enjoy doing when you are there.

In Redfish Bay, Aransas Bay biologist Dennis Pridgen and other scientists are looking at seagrasses and seagrass damage from a different perspective. Here the focus is on mechanical damage to the grass beds from boat propellers. On May 1, 2006 TPWD implemented a first ever regulation to protect marine habitat stating: "Within the Redfish Bay State Scientific Area, no person shall cause or allow any rooted seagrass plant to be uprooted or dug out from the bay bottom by a submerged propeller." It is important to note that the area is not closed in any way to boating activity. It is not a "no-prop zone." You will not get a ticket for running your boat in the area. The only time a violation will occur is if you are in water so shallow that your propeller is cutting into the bay bottom, creating a trench, and destroying the roots of the seagrasses.

How can the average boater, who may not know the area well, avoid damaging seagrass and having the potential for receiving a citation? Learning your boats' performance capabilities and the water depths required for operation at different speeds without touching bottom is your best defense. When in doubt, lift your motor and idle out, drift, troll or pole. When boaters create prop scars, they damage the health of the ecosystem and potentially the game fish populations that draw us to the flats to begin with. Ultimately they are damaging valuable habitat that belongs to all Texans.

While the Galveston area can be evaluated by using aerial photography, some of the "prop scars" in Redfish Bay fill up with algae and dead organic material, making them difficult to detect in aerial imagery. Therefore it has been difficult to properly evaluate the extent of prop scarring in the area. For the last two years, scientists using masks and snorkels have been making observations from a fishes' perspective, by swimming very precisely located transects (2.2 miles) marked on the bottom of Redfish Bay. In August of each year, every inch of those transects are swum to evaluate the habitat, and count and measure the damage to it caused by boat propellers. This work will continue for at least another three years.

TPWD obtained scar counts in August 2005 as baseline data before the regulation was put in place on May 1, 2006. Only five months later, in August 2006, a second round of observations was made. Since it takes a prop scar a minimum of a year to heal, a big change wasn't expected, nor was it found. August of 2007 will be the first time changes in the number of scars should be seen if the regulation is having the desired effect. On the optimistic side, more people seem to be utilizing push poles, trolling motors, and are being conscientious about how they run in the area. In addition, numerous constituents have contacted us about the details of the regulation because they want to do it right.

Located within RBSSA are approximately 12,000 acres of seagrass meadows, half of which are shallow enough to be susceptible to propeller damage by the people who come here to enjoy them. Have they been damaged? Yes, they have. There are thousands of propeller scars in the shallow, productive and fragile grass beds. However, TPWD is trying to maintain the areas' great natural productivity for all Texans by simply telling people they will now be held accountable for damage they create with their propellers to the resource that belongs to all of us. Do your part: Avoid a ticket, and promote wise use of seagrass habitat and all natural resources. For more information, go to the TPWD website and follow the links. http://www.tpwd.state.tx.us/landandwater/habitat/seagrass.