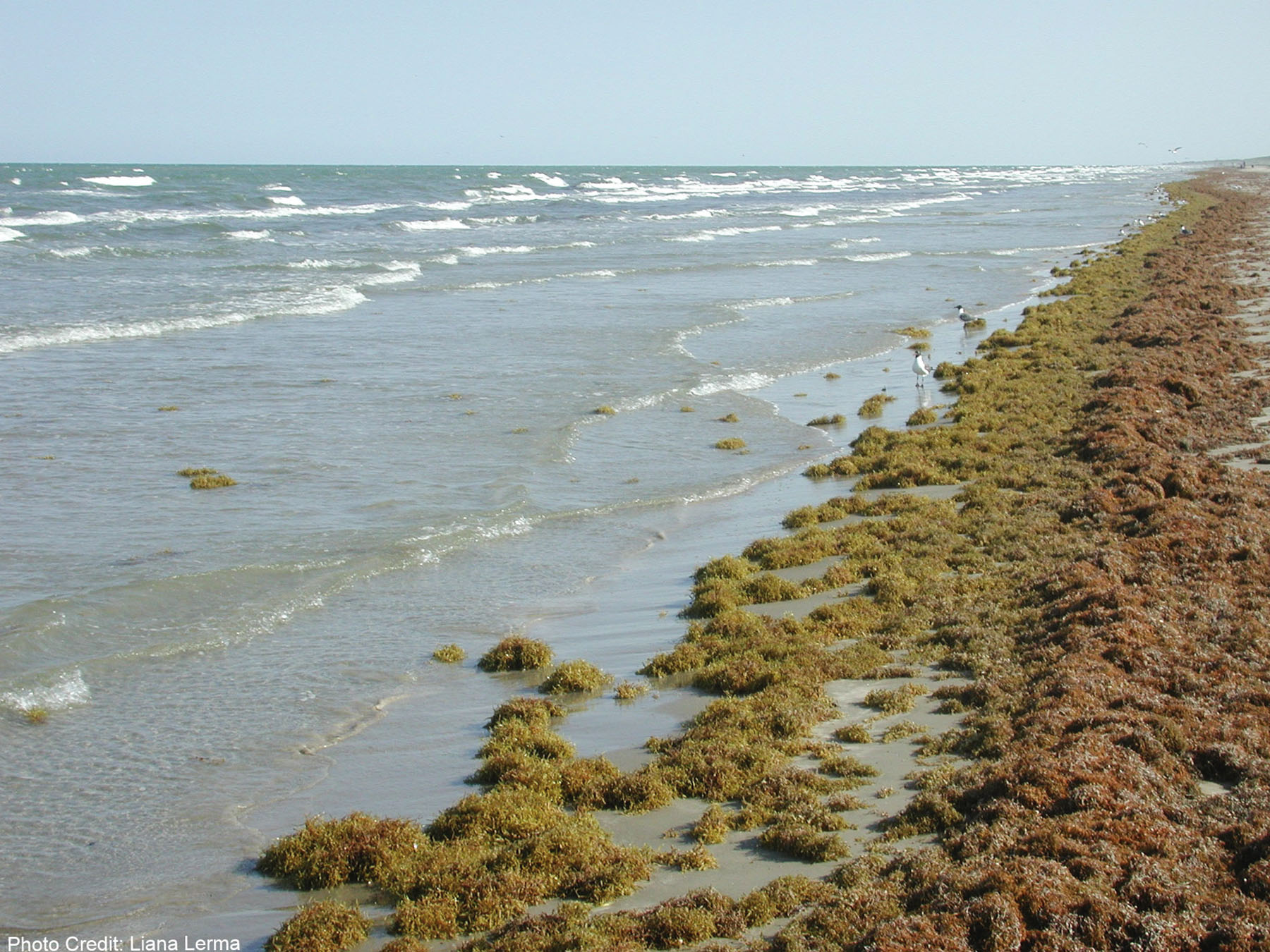 Sargassum washed up on South Padre Island Beach.
If you have taken a trip to any of Texas' beautiful beaches this summer, you may have been met with a pungent smell and the sight of what you may deem "dirty" beaches. Sargassum algae, a type of seaweed, has arrived in full force this year along the Texas coast and onto our beaches!

Sargassum may seem like a nuisance, but its presence on our sandy shores is actually beneficial as it protects the beach from erosion and helps provide habitat for marine life both in the water and on land. Sargassum, also known as gulfweed, originates in the Sargasso Sea, where it floats in giant rafts. Its buoyancy comes from the numerous gas-filled bladders that are found throughout the weed. Currents carry the floating weed from the Sargasso Sea down into the Caribbean where some of the rafts of sargassum drift around the Yucatan Peninsula and finally make their way onto our Texas shores.

Along the way, the sargassum acts as a habitat for many different species of fish, crabs, shrimp and other small organisms. Juvenile fish seek out the weed as an oasis to protect them from the predators of the deep blue seas. Large pelagic fish, in turn, are attracted to the mats of algae for the floating buffet. Savvy anglers visit these floating fish magnets for the bounty they hold. New research indicates that these rafts of sargassum are also an important habitat for juvenile sea turtles. The brown sargassum mats soak up the sun and are generally a couple of degrees warmer than the surrounding ocean, making the rafts cozy for the ectothermic (cold blooded) reptiles.

Sargassum's accolades do not end in the sea; as the sargassum washes ashore the mats of seaweed help trap sand that would otherwise erode due to wind and wave action. Over time, the seaweed and sand layers builds dunes. Additionally, as the sargassum decomposes it breaks down into vital nutrients such as phosphorus and nitrogen, which promotes the growth of dune plants which further, promotes dune building. The resulting sand dunes are vital for the protection of beachfront property, and the beach sand, when tropical storms and hurricanes hit.

It is understandable though, how the smell of rotting seaweed might mar some beach goers' opinion of this environmental and economic boon that washes up on the seashore. Their opinion of sargassum may be further reduced because as it floats with ocean currents, its matted rafts entangle marine trash which washes ashore with the seaweed. This trash is not only an eyesore, but poses a danger to sea birds and barefoot beachgoers.

To address the love-hate relationship, some municipalities rake-up and remove the sargassum and trash on a routine basis. However, beach raking is not only an expensive endeavor, but it can also be harmful to beach organisms and to nesting sea turtles. Moreover, sargassum removal increases the amount of sand erosion that occurs, which leads to more frequent beach fill projects, which are damaging to the environment and costly. Instead, some beach managers on the Texas coast choose to limit beach raking activities to the shoreline when unusually large amounts of seaweed has washed ashore. In place of raking the beach every day, maintenance workers are able to devote their time and energy to cleaning litter, which protects both the beachgoers and foraging sea birds.

If you are still not enamored with the idea of sharing the beach with seaweed, there are online tools that you can use to make sure that your beach vacation is a pleasant one. There are beach web cams for Stewart Beach on Galveston Island, Crystal Beach, Surfside Beach, Port Aransas and multiple beaches on Padre Island that show the state of the seashore and allow you to pick one that has the best conditions for your adventure. For future sargassum forecasts, Texas A&M University at Galveston has developed a Sargassum Early Advisory System (SEAS) using satellite imagery that predicts when large masses of the seaweed will hit the Texas coast. You may view their predictions at http://www.tamug.edu/seas/.