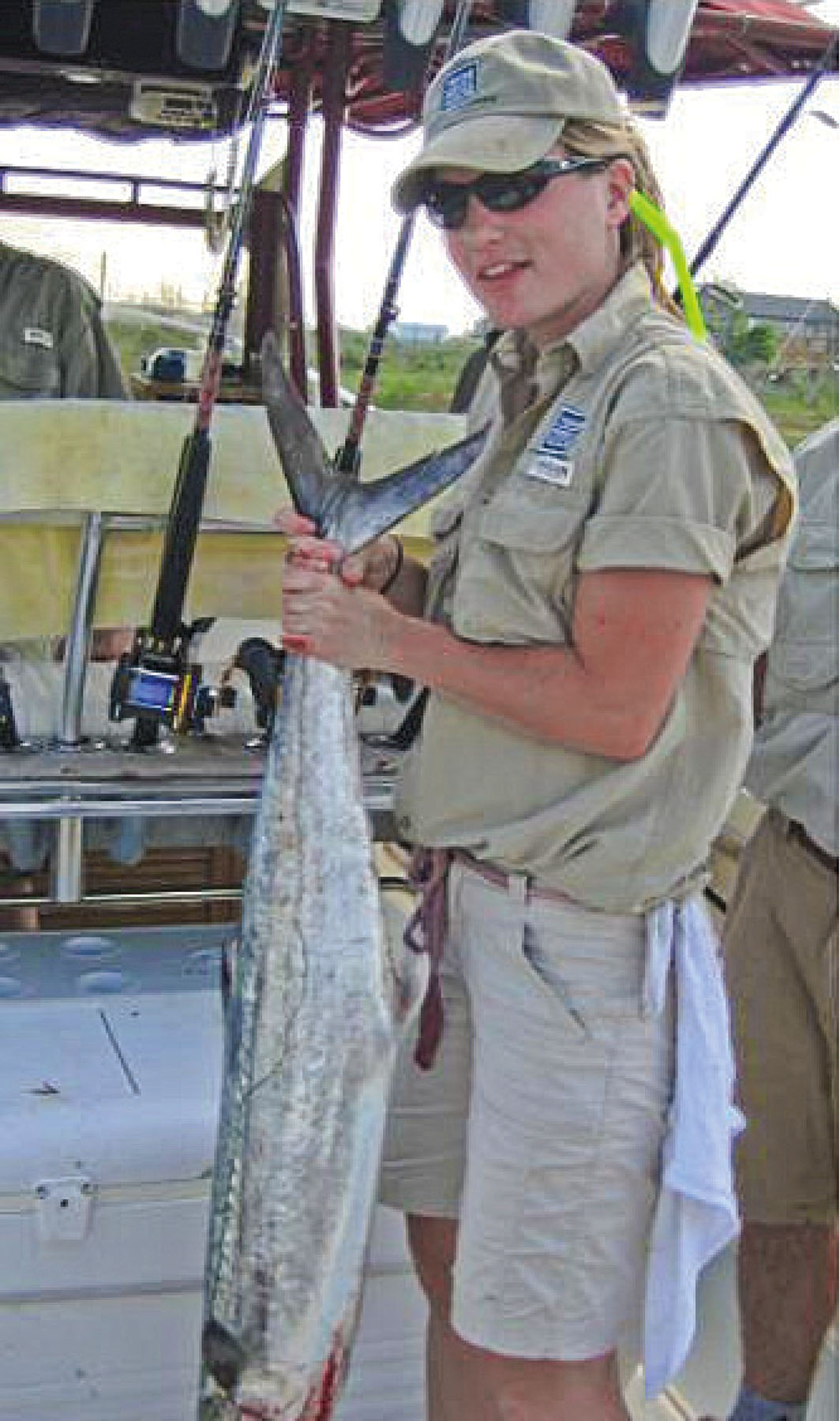 When I interviewed for the internship with Texas Parks and Wildlife Department (TPWD) Coastal Fisheries Division last summer, I was informed that there would be work days when I would watch the sun rise and set in the same day. I did not realize this would be true on the first three days.

When I reported for duty on Monday, I didn't expect to be doing much more than paperwork, but within an hour I was going out into the field to collect three bag seine samples. We ended the day setting two gill nets in Mud Lake. This was just before sunset.

Forty-five gill nets are set in 10-week periods during the spring and fall of each year and are used to monitor adult fish and crab populations. Each net is 600 feet in length made of 150-feet sections of 3-inch, 4-inch, 5-inch, and 6-inch monofilament mesh. The bottom line is filled with lead to weigh it down and the top looks like a green ski rope lined with floats. These are called the leadline and floatline, respectively. Anchors at each end of the net hold it perpendicular to the shore.

I returned at 5:30 a.m. (before sunrise!) to start my second work day with Craig LeBlanc and Kirk Blood. I watched as they fell into their typical routine of filling ice chests, hooking up the boat, and loading it with gill net necessities. Baskets, knives, gloves, measuring boards, rubber boots, bright yellow slickers, and clipboards with lots of data sheets are a few of the items. After a quick weather check, we were off.

At the first net site, I watched Craig and Kirk start the process of collecting water samples, setting up baskets for each mesh size, preparing data sheets, and laying out the tarp in preparation of pulling in the net. After retrieving the net's offshore anchor, we began pulling in the net, stopping frequently to extract fish and crabs. All organisms were measured and data recorded.

Craig and Kirk rolled their eyes as my excitement grew with each new type of fish that was pulled from the net. As the gill net season progressed, I learned to dread encountering many of the same fish I was so ecstatic about seeing on that first pickup day.

Toward the middle of the net, Kirk pulled out a beautifully copper-colored fish with an interesting spot located a few centimeters from its tail. I asked what it was. I definitely saw Kirk's look of disbelief as he said "Sciaenops ocellatus, or redfish (red drum) as I am sure you have heard." Yes, I had heard of them and seen a few pictures, but I had never thought much of them until now. I had never seen a photo that captured this fish's resplendence.

As the weeks progressed into gill net season, I found myself experiencing wonderful field activities I had never imagined. I have to hand it to the Coastal Fisheries guys; they are a tough and knowledgeable crew that gets the job done. I learned a lot about numerous species and their habitats. I also found the gill net catch rates very interesting.

This spring gill net catches rates of red drum set a new seasonal catch rate record (3.43 fish/hour). This new record more than doubles the previous record set during the spring of 2007 (1.63 fish/hour). In fact, three of the last four years have produced record numbers for red drum since gill nets were first sampled in the Sabine Lake ecosystem in 1986.

The increase in red drum in the Sabine Lake area could be due to many factors. It could be the increase in red drum occurred after the intense flooding associated with Hurricane Ike. Marsh lands leading to many freshwater ponds and low lands were opened to salt water lakes and bayous creating more shoreline microhabitat for small shrimp, crustaceans and other types of foods red drum consume.

My summer with TPWD is one I will never forget. This is definitely an experience I would recommend to those interested in this profession. You can't put a price on true hands on experience and working with the finest fisheries managers in the field, even if you work from sunrise to sunset!