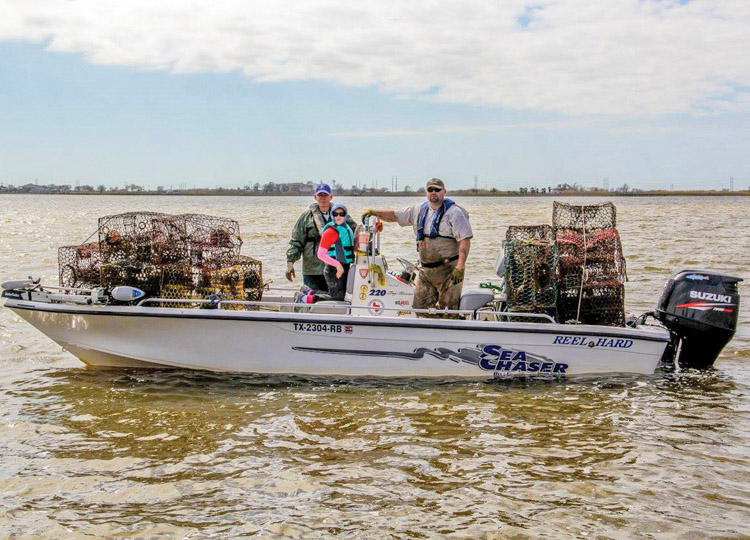 Lost fishing gear including fishing line, nets, and various types of traps represents 10% of marine debris littering the bottoms of our coastal estuaries and bay systems. While there will always be some fishing gear that is inevitably lost in any fishery, an effective clean-up program should include a systematic process to locate and regularly remove lost fishing gear as efficiently as possible. Across the country, there are a variety of programs involving both the private and public sectors, commercial and recreational fishermen, designed to locate and remove lost fishing gear on an annual basis. Some of these programs include the systematic removal of stray crab pots by fishermen after commercial season closures; programs led by fishermen’s associations to remove lost fishing gear; and even a lost net reporting system resulting in the immediate response and retrieval of lost gillnets.

In Texas, abandoned, lost, or derelict crab traps have been identified as a significant source of mortality for a variety of recreationally important fish species and for a few select species of greatest conservation need such as the Texas diamondback terrapin. These lost traps also have negative impacts on habitat, create navigation hazards, and become a source of visual pollution. To help combat this problem. The Texas Abandoned Crab Trap Removal Program was created in 2001 with the passing of Senate Bill 1410 during the 77th Texas Legislative session giving the Texas Parks and Wildlife Department (TPWD) authority to create a community-based program to systematically remove abandoned, lost, or derelict crab traps during a 10-day crabbing season closure. Prior to the passage of the Bill, the removal of derelict crab crabs was delegated to Texas Parks and Wildlife Department (TPWD) game wardens who had the only authority to remove traps from the public waters of Texas. These efforts were very labor intensive, time consuming, and costly. Thus, the extent of these issues were brought to the attention of state legislators, which ultimately led to the passing of the Bill. Provisions in the Bill gave TPWD the authority to establish a temporary closure of both the recreational and commercial crab fishery each year, and stated that abandoned crab traps would be considered “litter” under state health and safety regulations and anyone from the public could pick them up and dispose of them during the seasonal closure. These provisions provided the opportunity to use volunteers in a statewide campaign to remove abandoned crab traps.

Consequently, in February 2002, TPWD facilitated the first ever Abandoned Crab Trap Removal Program event in which over 8,070 crab traps were removed from Texas’ coastal waters by 543 volunteers using 223 vessels. Since that time, each February for more than fifteen years, countless numbers of volunteers have spent time on the water searching the bays for abandoned crab traps that have been left to foul shrimpers’ nets, snag anglers’ lines, “ghost fish,” and create unpleasant views. To date, 3,198 volunteers have removed nearly 34,000 crab traps using 1,080 vessels. Undoubtedly the Texas crab trap removal program has protected and conserved countless crabs, finfish, and marine reptiles that may have otherwise perished in a lost or abandoned trap.

During the annual 10-day period beginning on the third Friday in February each year, coastal waters are closed to crabbing with wire mesh crab traps. As mentioned previously, any traps left in bays are assumed abandoned and considered “litter” under state law allowing anyone to legally remove any and all crab traps they happen to find. To facilitate trap removal efforts each year, the Texas Parks and Wildlife Department and our partners provide 20 trap drop-off sites at locations in each major bay system along the coast. Additionally, at all sites, dumpsters or collection areas marked with banners remain available to receive traps for the duration of the closure each year. TPWD also supplies tarps for vessels, gloves, crab trap hooks, and other items to volunteers. The comradery and friendly competition amongst community volunteers has been instrumental in the success and growth of the program.

Also, vital to the success and sustainability of the program, are the valued partnerships with Coastal Conservation Association Texas, Coastal Bend Bays & Estuaries Program, Galveston Bay Foundation, San Antonio Bay Foundation, and the U.S. Fish and Wildlife Service who have continued to provide support to the crab trap removal program. Numerous other organizations and companies have also volunteered their services throughout the years.

This year’s cleanup (2018) is February 17th through the 26th. The big cleanup “push” will be Saturday, February 18th. To volunteer for this year’s program, be sure to visit the TPWD website (www.tpwd.texas.gov) for additional information, including drop-off sites, early next year. In the meantime, visit the Abandoned Crab Trap Removal page on the TPWD website at tpwd.texas.gov/landwater/water/conservation/Crab_trap/Crab_trap.phtml for more information.

Please help us remove abandoned, lost or derelict crab traps from our coastal bays. Come out and make a difference!