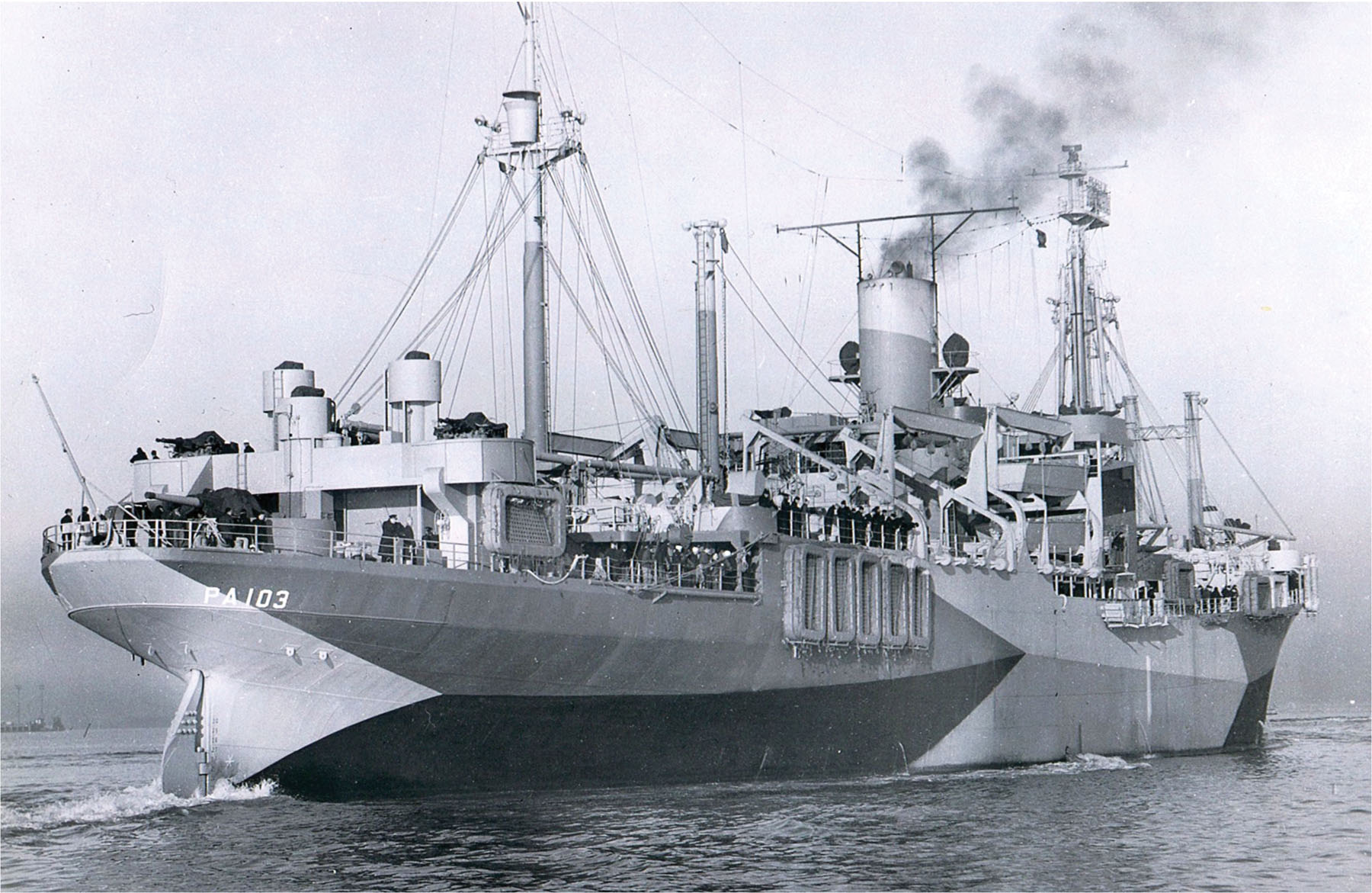 U.S.S. Queens (1944-1946)
The Texas Clipper lived several lives, beginning with its christening as the USS Queens on September 12, 1944, a WWII transport and attack ship. She carried troops and wounded from battlefields in the Pacific and was the first attack troop transport arriving at Iwo Jima.

After the war, she was modified and became the SS Excambion, one of the post-war four aces for the American Export Lines. She carried cargo and passengers between New York City and Mediterranean ports from 1948-1959.

The Texas Clipper is a 473ft long ship that served as the Maritime Training Vessel for Texas A&M University at Galveston for over 30 years. She measures 66ft at her widest point and is approximately 81ft tall from the keel to the top of the sun-deck rail. She weighed 7,970 lightship displacement tons with a full load displacement of over 13,000 tons.

For the last decade she resided in the US Maritime Administration (MARAD) Reserve Fleet, anchored on the Neches River below Beaumont. Texas Parks and Wildlife Department began acquisition of the Texas Clipper in 1997.

By mid-afternoon on the 3rd of November, she was heading south in the Gulf of Mexico. TPWD had waited 10 years for this photo!

On 6 November 2006, she arrived in the Brownsville Channel and was pushed up against shore (side-saddle) at ESCO Marine shipyard.

The first action was to remove the massive amounts of debris off the ship so workers could move about. All floatables and basically anything that was not nailed down was removed.

Asbestos is a carcinogenic when exposed in the air column but is not a marine hazard underwater. TPWD elected to have all asbestos removed because of the possibility that it would be damaged during the removal of other items such as air handling systems and walls.

The main objective in cleaning and modifying the ship for reefing was to keep as much ship structure and detail in place as possible. Items such as anchors remained on board as habitat and diver attractions.

Over 72,000 pounds of PCB containing material was removed, including miles of electrical wiring and air ducts that contained gaskets.

Engine rooms were cleared to allow for more diver access without extensive entanglements. Approximately 700 tons of metal were removed during the project.

On 1 October 2007, TPWD received USEPA approval to reef the ship. Complications in getting tug boat contracts and coordinating the news media \ public relations event delayed the project, pushing us into the week of November 13. As TPWD approached Reefing Week, adverse wind and wave conditions further delayed the reefing event until later in the week. Ideal reefing conditions were determined to be waves <4ft and winds <10-15kts. The weather buoy 50 miles southeast of Corpus gave an indication of sea conditions, which ranged from 5ft to over 11ft.

Sea states and wind finally calmed down by mid morning on 16 November 2007 and the contractor decided to make a run through the jetties by that afternoon. The ship traversed the jetties by 2:30PM and headed out to sea, making a series of circles around the reef site until the next morning at day light.

On the morning of 17 November 2007, the anchor was set, lower hull holes opened by workers, and flood values opened to begin sinking. As the ship took on water, it began listing to the port (left) side. The ship sank at approximately 12:30PM.

Even though laying on its port side, the Texas Clipper is a welcomed addition to the Texas Artificial Reef Program and is having a positive impact on diving and fishing in the Gulf of Mexico off Texas. Our hopes are that it will become a national and international dive attraction while serving as important marine habitat.