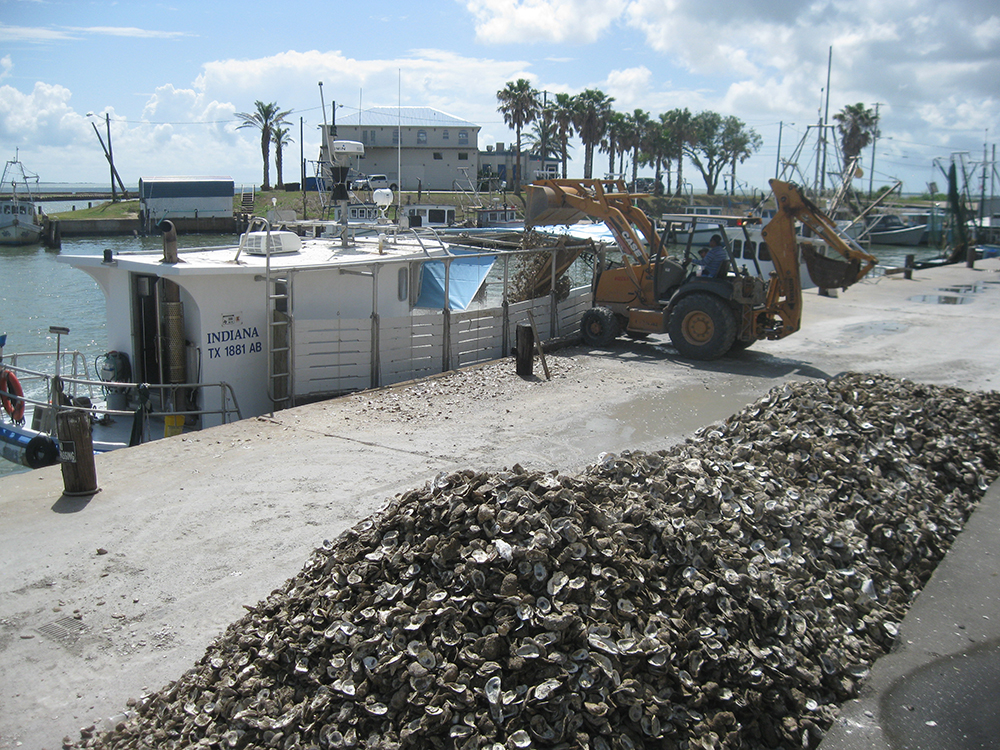 Figure 1. Oyster cultch is staged at the Port Lavaca harbor (foreground), waiting to be loaded onto a transport that will take it to the shell placement site in Lavaca Bay.

Many coastal communities rely on the economic and ecological impacts of oyster reefs.  Oysters filter water, provide storm protection, create habitat, support jobs, and are a fine meal.  Long recognizing the value and vulnerability of oysters, the Texas legislature created the Fish and Oyster Commission in 1895.  This agency evolved into today’s Texas Parks and Wildlife Department (TPWD) which continues to protect the state’s many natural marine resources, including both the natural oyster populations and oyster industries that depend on them.  Given the lengthy history of oyster management, little more would seem needed; yet in 2017, both the Parks and Wildlife Commission and the Texas Legislature saw the need for additional protections.  While the Commission expanded existing protections by reducing the sack limit to 30 sacks per day, closing some minor bays and all nearshore intertidal reefs, reducing the tolerance of undersize oysters in a legal sack from 15% to 5%, and closure of Saturday to commercial harvest, the Legislature developed brand new tools in the form of House Bill 51 (HB51) to provide additional protections and ensure oyster sustainability for future generations.

Hurricane-induced sedimentation coupled with recent extreme drought and flood conditions combined to significantly reduce oyster populations.  Droughts increase disease and predation while floods lead to starvation and lost young.  Because Mother Nature’s bounty has been reduced, harvesting ended up taking a greater percentage of surviving oysters, further impacting the reef structure.  This in turn reduced the filtering and buffering capacities in our bays.  HB51 was developed to mitigate these issues using a variety of methods.  By addressing both biological and harvest challenges simultaneously, generations of oysters, oyster harvesters and coastal residents will benefit from improving oyster populations.

HB51 made a number of changes to oyster harvesting rules.  To ensure all people involved in oyster production were invested in the rules, licensing requirements were expanded to include entire crews and Certified Seafood Dealer penalties for possession of undersize oysters were created.  Penalties for all violations were enhanced.  Penalties now can accrue to the boat captain, crew and Certified Shellfish Dealer and include a 30-day suspension of crew / boat activities.  Given that their season is November 1 – April 30, a suspension could result in significant revenue loss.

Another aspect of House Bill 51 requires Certified Oyster Dealers to return 30% of their annually harvested oyster shell, in fee or kind, back to Texas bays.   Since not all areas can support a healthy reef, TPWD is in various stages of getting permits for degraded, historical reefs in Galveston, Matagorda, San Antonio, and Aransas bays.  Once a site is permitted, Certified Shellfish Dealers coordinate with local TPWD staff to place shell in permitted areas.  By placing shell near degraded reefs, the chance of reef recovery is enhanced.   With TPWD monitoring shell amounts and placement, commercial oyster boats are loaded with oyster shell and taken to marked areas where water cannons spray the shell onto the marked areas.  Shell ‘planting’ will continue for days or even weeks until the owed shell is returned.  Upon project completion, TPWD scans the bottom to ensure no piles of shell could impede navigation.  Planted reefs remain off-limits for harvest for several years to ensure new growth is well established.  Already permitted, the Noble Point Reef in Lavaca Bay hosted the first two HB 51 shell plants in 2018 with Pasadena Reef in Galveston Bay quickly following.  In 2019, both areas continued to supplement their reefs with the return of commercially harvested shells to their native Texan waters.  So far, a total of 13,208 yd3 of oyster cultch has been placed in these two bays in less than two years; 6,897 yd3 at Noble Point and 6,311 yd3 at Pasadena Reef.  TPWD will continue to work to permit commercial areas and monitor cultch into the foreseeable future so this public resource remains a legacy for generations to come.

For most sports fishermen, House Bill 51 and actions taken by the Parks and Wildlife Commission passed virtually unnoticed, yet the potential benefits are vast.  Oyster reefs are a unique estuarine habitat; they serve as a food source, create habitat, filter water, and offer some storm protection.  When properly maintained, oyster reefs can continue offering these services to Texas residents for millennia.  The passage of House Bill 51 and ongoing department actions will protect and enhance Texas oysters and Texas bays for generations to come.