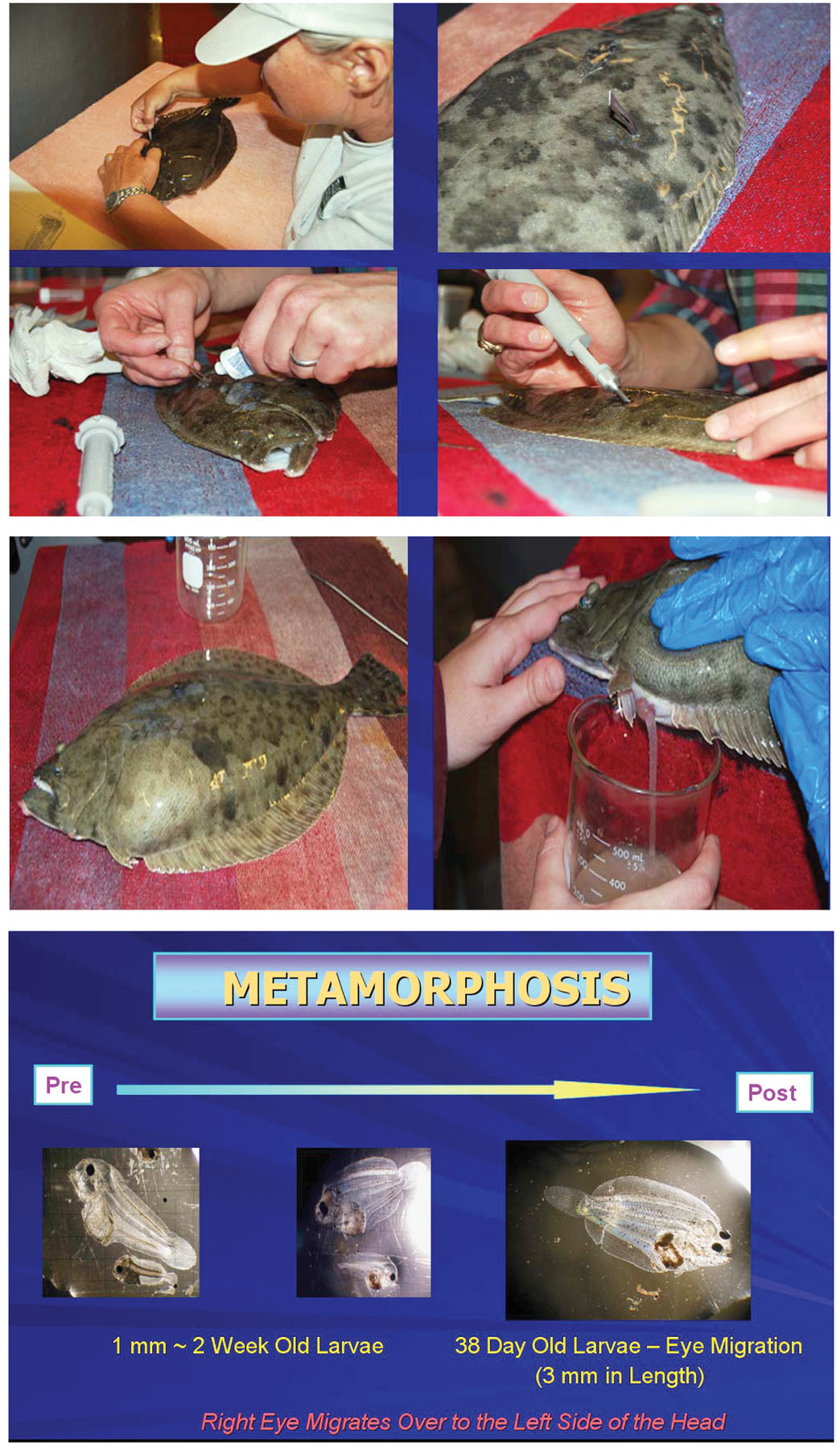 A significant accomplishment for the hatchery program this past winter has been the culture and subsequent release of several thousand southern flounder fingerlings into Texas coastal waters. However, methods to spawn captive flounder broodfish, and rear larvae in grow-out ponds on a large-scale basis are still ongoing. While working in collaboration with Dr. Joan Holt (University of Texas Marine Science Institute, UTMSI) TPWD hatchery staff have spawned adult flounder and reared the larvae to the juvenile stage (3 inches in total length). The Coastal Conservation Association has also played an important role in helping develop protocols to culture flounder by providing critical funding for broodfish life support systems, water quality equipment, tanks at the hatcheries, and by supporting UTMSI's flounder research.

The primary goal of the hatcheries' southern flounder program is to develop techniques for culturing this species on a large-scale basis to compensate for weak year class recruitment that may occur in the bays. A critical challenge in the culture of flounder has been to consistently spawn the fish while in captivity. The traditional method of controlling photoperiod and water temperature to induce spawning of red drum and spotted seatrout has not worked very well for the southern flounder. TPWD biologists have had some initial success using hormone therapy to spawn captive flounder. Figure 1. illustrates the procedure used to help a female flounder spawn her eggs in captivity.

Approximately 72 hours after the application of hormonal therapy, the female flounder spawns her eggs while being stripped spawned (Figure 2).

Flounder go through very unique developmental stages as they grow. The most interesting is their metamorphosis from an upright swimming fish to the dorsal- compressed appearance of a flatfish. This phenomenon occurs within 30-50 days post hatching and this process is shown in the next figure.

Ultimately, TPWD must determine whether stocking juvenile flounder is a viable alternative to enhance the southern flounder population. TPWD biologists are optimistic that within the next two to three years we will have the capability to rear millions of juvenile southern flounder for purposes of stock enhancement in Texas coastal waters.

Continued declines in flounder populations during the past decade has prompted TPWD to modify flounder fishing regulations. Beginning September 1st, 2009 the recreational daily bag limit changes from 10 fish to five fish; the commercial daily bag limit is reduced from 60 fish to 30 fish; and Texas waters will be closed for the take of flounder during the month of November except to recreational rod & reel anglers with a 2 fish per day bag limit. The minimum (14 inches) and maximum (no limit) size limits remain unchanged. And , it is important to remember that the hatchery program serves as one of the fisheries management tools utilized by TPWD; other tools such as the long-term independent fisheries monitoring program, fishing regulations, habitat protection, and the cooperation of conservation minded anglers are all necessary for Texans to protect and preserve our valuable coastal fisheries resources.