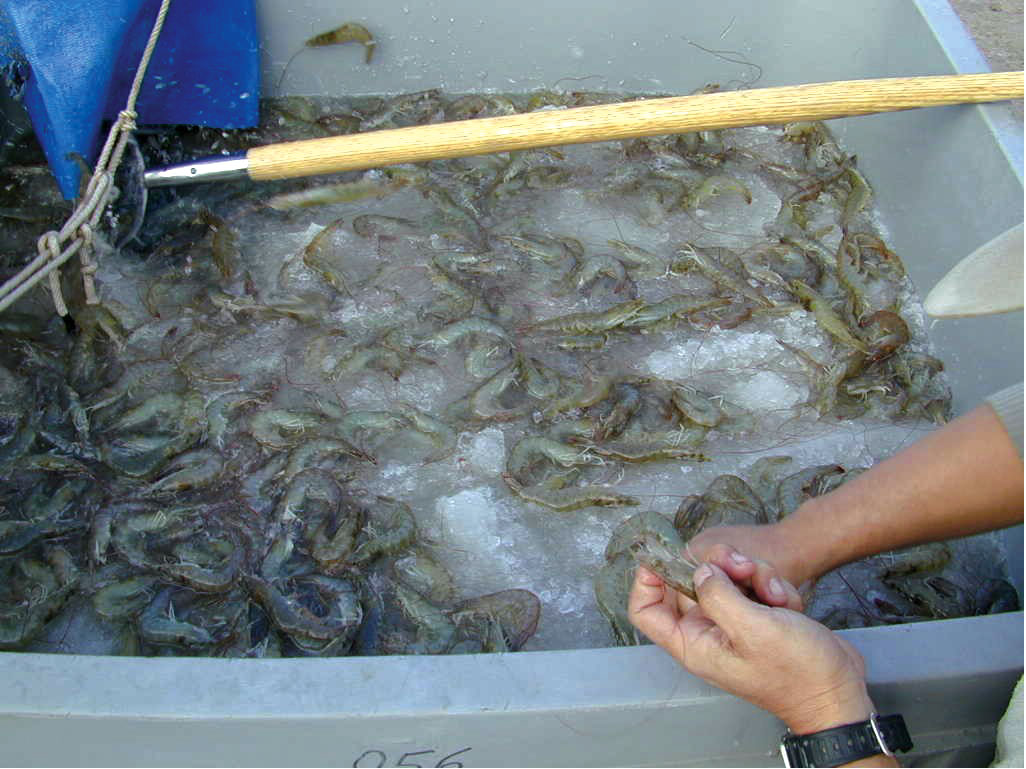 Fig. 3 - A slush ice filled tote with approximately 1,000 pounds of Texas farm raised shrimp.
Prior to1998, ponds of the emerging shrimp farm industry were only intermittently inspected by Texas Parks and Wildlife Department (TPWD). In 1998 the TPWD Coastal Fisheries Division established the Shrimp Inspection Program. This program is authorized under Texas Administrative Code, Title 31, Part 2, Chapter 57, Subchapter A - Harmful or Potentially Harmful Fish, Shellfish, and Aquatic Plants. The rule encompasses all aspects of exotic shrimp culture, transport, disease management and best management practices. Commercial shrimp farmers must acquire three state permits to operate in Texas. These are the Exotic Species Permit issued by TPWD; Industrial Waste Water Discharge Permit issued by Texas Commission on Environmental Quality (TCEQ) to discharge seawater into the bays; and an Aquaculture Permit as required by Texas Department of Agriculture.

Shrimp farming in Texas started on a pilot-scale in the late 1960's with Texas A&M University researchers developing indoor tank and outdoor rearing pond protocols. Numerous commercial shrimp farms were launched in the 1980's based on technological advances made by researchers. In the late 90's the industry reached its peak in Texas with 15 commercial facilities, nine on the coast and six located inland as far as west Texas. Also, three research facilities (Texas Agriculture Experiment Station in Flour Bluff and Port Aransas and the Texas State Technical College in Palacios) were in full operation. However, due to a high volume of imported foreign shrimp, the price of domestic shrimp has dropped dramatically in recent years. Currently, there are only four commercial shrimp farms operating on the Texas coast and one facility inland. Nonetheless, most commercial shrimp farmers have maintained their state issued permits in case market prices rebound.

The species of choice for the commercial shrimp farming industry has been the Pacific white shrimp which is not indigenous to Texas waters. Because farmers prefer culturing this exotic species, TPWD is required by law to regulate its use in order to protect the state's coastal waters from introductions of exotic species. The main reason farmers prefer culturing Pacific white shrimp is that it naturally grows faster and larger than Texas' native shrimp. This makes this species commercially viable.

TPWD requires shrimp farmers to ensure the shrimp in their aquaculture applications are certified as pathogen-free. The certification involves purchasing larval shrimp that have been reared from Specific Pathogen Free (SPF) shrimp strains. A certification document must be provided stating that the exotic shrimp being cultured have a clean bill of health and are disease free for a variety of diseases and parasites. Currently, the Texas Veterinary Medical Diagnostic Laboratory (TVMDL) located in College Station, Texas is the only state approved facility that can issue this shrimp health certification. Over the years, TPWD has accepted health certifications from other highly respected diagnostic laboratories located in Arizona, Mississippi, Florida and Hawaii.

TPWD's shrimp inspection program involves standard protocols. Once the farmers receive their shrimp health certification, they may start the grow-out processes. Tank raceways and ponds are typically stocked with shrimp larvae during March and April. When the larval shrimp are approximately 6-8 weeks old or weigh about 1 g, TPWD inspectors make site visits to the farms to randomly sample the juvenile shrimp for any signs of diseases. Each farm must be inspected at least two times during the production season. The first inspection is when the juvenile shrimp are 6-8 weeks old and the following inspection is prior to water discharge or harvest. During that process, if a disease issue is discovered, TPWD inspectors quarantine the entire facility until the disease has been positively identified. Once a disease has been identified, a quarantine period is imposed according to the specific disease detected. Quarantine requires that absolutely no culture water be discharged from the facility until the disease issue is properly addressed.

Two diseases that have hampered the shrimp farming industry world-wide are Taura Syndrome Virus (TSV) and White Spot Syndrome Virus (WSSV). Both of these diseases can pose a serious threat to native shrimp populations but are not harmful to humans. TPWD inspectors have conducted more than 13,330 inspections since the program's inception. During that time, TSV has been detected only two times (1999 and 2004) in commercial rearing ponds while WSSV has not been detected at anytime in Texas shrimp farms. In addition, TPWD has conducted two scientific studies (1997-2000 and 2005-2007) to determine whether any shrimp culture diseases have made their way to state waters via sources such as shrimp processing plants, retail food distribution stores that import frozen foreign shrimp, waste water discharges, or even shore birds that can transport live shrimp from outdoor culture ponds to coastal waters. The encouraging news is that no exotic shrimp diseases have been detected in our native shrimp or crab populations.

The Texas shrimp farming industry has done an excellent job at being responsible corporate citizens and has over the years produced very healthy shrimp for commercial sale (Figure 3). Between 1999-2008, shrimp farm producers have provided more than 62.9 million pounds (heads-on) of farm-raised shrimp. Compared to 349.2 million pounds of heads-off shrimp harvested by commercial bay and gulf shrimpers in Texas, shrimp farm production is relatively small.

Considering expected growth in the earth's human population and unsustainable commercial fishing practices that are occurring world-wide, our appetite for seafood may be challenged in the future. However, Texas shrimp farmers stand ready to fill the gap as needed in supplying a high-quality seafood product while at the same time taking a resource conservation approach to their large-scale production operations.