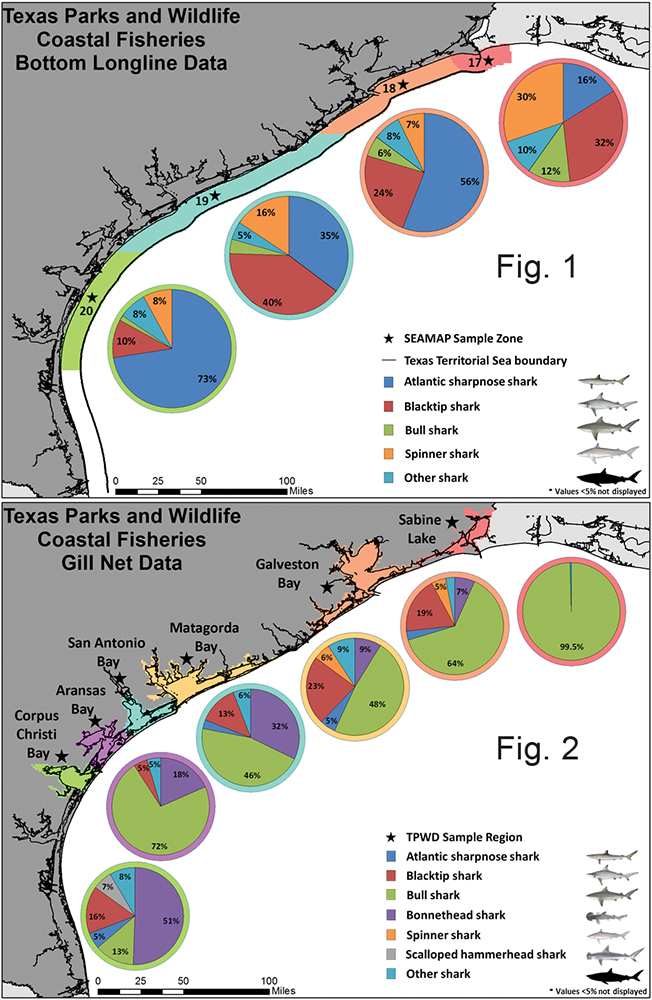 Figure 2. Total species composition of sharks in TPWD gill net surveys (1982-2017; except for Sabine Lake (1986); “Other shark” is the combination of multiple minor species).

Sharks: if you’ve spent time on the water in Texas bays or the Gulf of Mexico, odds are you have encountered at least one species of these cartilaginous fishes. More than two dozen species of sharks call Texas waters home for at least some of the year.Recreational and tournament shark fishing are popular in Texas, with nearly all species present in Texas waters landed yearly.Despite these landings, most of the information collected on shark abundance and distribution in Texas comes from the Texas Parks and Wildlife Department (TPWD) Coastal Fisheries Division’s resource monitoring program using gill nets in bays and bottom longlines in the nearshore Gulf of Mexico (GOM).

When we look at the two data sets (Figures 1 & 2), we see the same few shark species comprise much of the catch for both gear types; Atlantic sharpnose (Rhizoprionodon terraenovae), blacktip (Carcharhinus limbatus), bull (Carcharhinus leucas), bonnethead (Sphyrna tiburo), and spinner (Carcharhinus brevipinna). However, the proportions of each species encountered are very different between the bottom longlines in nearshore GOM waters (Figure 1), and the gill nets from the nearby bay systems (Figure 2). Multiple factors can lead to differences in catch rates for different shark species between areas including; interspecies competition, salinity, prey availability, water temperature, size, and proximity to a Gulf pass.

Zone 17, waters off Sabine Lake and Louisiana, has a catch composition that is evenly distributed across multiple species, compared to the other three zones which are dominated by one or two species (Figure 1).Additionally, this zone has the greatest proportion of spinner sharks (30%) of any Texas GOM zone as well as a greater proportion of bull sharks than in other areas (Figure 1). When we contrast this with the gill net data (Figure 2), we see a completely different pattern! Sabine Lake (the adjacent bay and estuary system to GOM Zone 17) is almost completely dominated by one species. Bull sharks comprise 99.5% of the total catch, most likely due to the very low salinity nature of Sabine Lake (mean historical salinity 7.3ppt), and the high tolerance of bull sharks to low salinity.In fact, when we look across Figure 2, most of the bay systems that have higher percentages of bull sharks typically have lower mean salinities (e.g. Aransas Bay system 20.9ppt, San Antonio Bay system 17.8ppt, Galveston Bay system 15.7ppt, Matagorda Bay system 23.5ppt).Bull sharks are a coastal, shallow water, species with an affinity to murky water, an environment fostered primarily by river inflows and windy conditions.

We also see some interesting regional patterns for the Atlantic sharpnose. Sharpnose comprise a whopping 73% of the total catch in GOM Zone 20 adjacent to Corpus Christi and Aransas Bay systems, followed by Zones 18 (56%) and 19 (35%) (Figure 1). Atlantic sharpnose prefer warmer, shallow, coastal waters and the surf zone, but are not uncommon in bays and estuaries, so you might expect to see large numbers of them in gill net data from bays adjacent to these high-concentration nearshore GOM zones. We don’t! Sharpnose represent just a fraction of the gill net catch, both in these bays, and coastwide (Figure 2).Atlantic sharpnose not being encountered by TPWD gill nets could be due to various unknown factors including seasonality, diet, habitat preference, interspecies competition, and hydrological conditions.

The opposite pattern occurs with bonnethead sharks, a species that is nearly absent in bottom longline samples, but shows up frequently in gill net sampling (Figure 2). Bonnetheads represent more than half of the shark species encountered in the Corpus Christi Bay system, and a third of the species in the San Antonio Bay system (Figure 2).This disparity between gear types is due to the ecology and behavior of the species. Bonnetheads are a schooling species known to travel in groups of 5-15 or more individuals, meaning that it is likely for a single gill net to capture multiple bonnetheads.In addition, bonnetheads primarily feed nocturnally on crustaceans like shrimp and blue crabs in shallow water grass flats in bays and estuaries, exactly where and when TPWD gill nets sample.

One final pattern to mention is how distinctly different the gill net catch composition of the Corpus Christi Bay system looks in comparison to the other regions shown in Figure 2. The Corpus Christi Bay system is a higher salinity estuary (mean historical salinity 31.3ppt) compared to most others along the Texas coast, due primarily to reduced freshwater inflows. This could potentially influence the high abundance of bonnetheads and scalloped hammerhead sharks in this bay system, as they are known to move to areas of higher salinity.

Although sharks are an integral part of the Texas marine ecosystem, ranging from large apex predators like bull sharks, down to prey species like Atlantic sharpnose and bonnetheads, the species you are likely to be sharing the water with depends on whether you are in a bay or out on the Gulf, and where along the Texas coastline you are.Fluctuating freshwater inflows, increasing water temperatures, and modification of habitat will determine the future of shark composition and abundance across the Texas coast, and TPWD will be there routinely sampling to monitor these changes in the future.