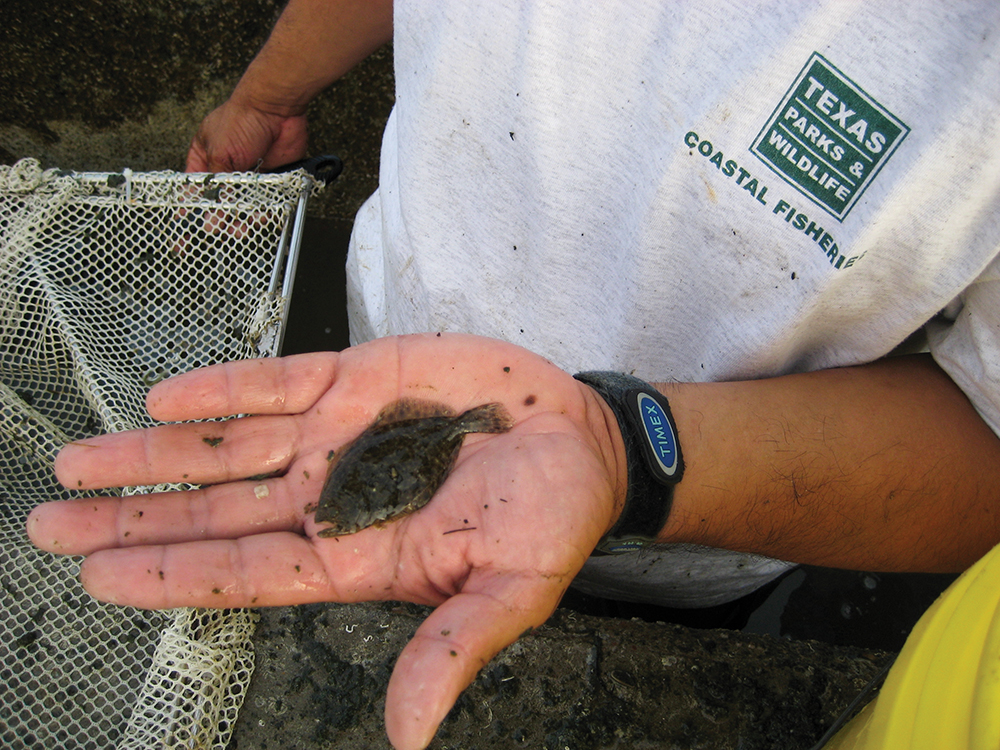 Juvenile southern flounder harvested from the rearing ponds at the MDC hatchery in Corpus Christi, TX.

Anyone who enjoys fishing along the Texas coast knows that southern flounder (flounder) are a popular fish to catch. Whether it’s on a rod and reel or from a lucky gig at night, landing a flounder is exciting. Flounder are one of the top three most sought after sportfish in Texas, along with spotted seatrout and red drum. Despite the skill it takes to land flounder, population trends show flounder have been decreasing over the last 30 years; Texas Parks and Wildlife Department Coastal Fisheries (TPWD) has seen decreasing catch rates from the Marine Resource Monitoring Program’s data that has been collected since 1975. The change in flounder catch rates has largely been tied to winter temperatures, with increased larval survival in colder years. Different management strategies have been enacted by TPWD to sustain healthy flounder populations, such as regulation changes and a stock enhancement program that aims to release hatchery raised flounder into the wild.

The southern flounder Stocking Program was initiated by TPWD in 2006 with ongoing efforts since 2009. The primary goal of the program is to develop techniques to produce flounder on a large-scale to supplement wild populations. By supplementing wild populations with hatchery fish, the fishery can be supported during periods of decreased larval survival from warm winters, harmful algal blooms, and/or other environmental disturbances. In Texas, we have three coastal hatcheries that are working on producing southern flounder for stock enhancement. These facilities are strategically located along the coast with the CCA Marine Development Center in Corpus Christi, Perry R. Bass Marine Fisheries Research Station near Palacios, and Sea Center Texas in Lake Jackson.

To produce juvenile flounder, the TPWD hatcheries maintain adult fish that are obtained from the wild, kept in indoor tanks and subjected to a 150-day light / temperature cycle that mimics seasons and conditions flounder would experience during a year in the wild. Eggs that are spawned by the flounder are cared for indoors during an intensive larval grow-out phase that lasts between 40 and 50 days until metamorphosis into juvenile is complete. During metamorphosis, larval flounder undergo a body change that involves the migration of the right eye to the left side of the head, and as the eye migrates, the body of the fish begins to settle to the right side and become flat. Flounder have a very tight temperature range for survival in the critical larval stage leading up to metamorphosis. Optimal environmental conditions for larval flounder to reach metamorphosis include a narrow seawater temperature range between 64 and 68 °F. Once metamorphosis is complete, they can be stocked into outdoor rearing ponds for further grow out before they are released into Texas bays and estuaries.

While the light and temperature cycle has been successful in producing millions of red drum and spotted seatrout eggs, it has not consistently provided enough of the desired flounder eggs. Therefore, a hormone-induced strip spawning method is used in conjunction with the light and temperature cycle, which allows hatchery staff to obtain more fertile eggs on a consistent basis. With this process, hatchery staff select females to be injected with hormones to increase egg production. Females that are injected with hormones are held for 48 hours in separate tanks until they are ready to release eggs. Hatchery staff catch male flounder from their tanks and obtain milt that will be used to fertilize the eggs. Eggs are expressed from the female, mixed with milt and then incubated in 100-gallon seawater tanks. Hatchery staff monitor development from egg fertilization until they hatch out of the egg as a larval flounder.

Hatchery production of flounder is directly tied to the production of live natural feed for early grow-out stages. The first food source for flounder in hatcheries are rotifers, a microscopic animal also known as zooplankton, that consume microalgae. Rotifers are a good food source for fish in hatcheries because of their small size, high reproductive rates, and the ability to alter their nutrition by adding supplements such as vitamins and fatty acids. Rotifers are not the only live food that is offered to the larval flounder. As fish grow, so does the size of the food offered. Artemia, or brine shrimp, are the second food source currently offered to hatchery flounder. The transition between food sources can be difficult, and it is not always successful. Currently, hatchery biologists are looking into growing other organisms, such as copepods and mysid shrimp, to help diversify the types and sizes of food offered to hatchery flounder. Being able to offer a diverse variety of feed will not only be more nutritious for the growing fish but will help improve survival. Having new feed to bridge the food-size gap will help in the transition to larger food items in later life-stages. Currently, cultivating new live food sources is an obstacle the hatchery is facing.

Production of flounder has proven to be tough, but hatchery staff are up for the challenge. We are moving forward and working toward advances to improve the production and survival of hatchery flounder. Maintaining optimal temperature for larval flounder metamorphosis has proven problematic with the existing hatchery infrastructure, which was originally designed for red drum. Due to space issues and equipment needs, new buildings are being constructed for both the CCA Marine Development Center and Sea Center Texas to specifically address the culture and grow-out of flounder. The new buildings will give us the space and equipment we need to expand live feed production and eventually flounder production. The future is looking bright for hatchery flounder as we actively work towards ways to improve survival prior to metamorphosis so we can grow-out more flounder to support wild populations.