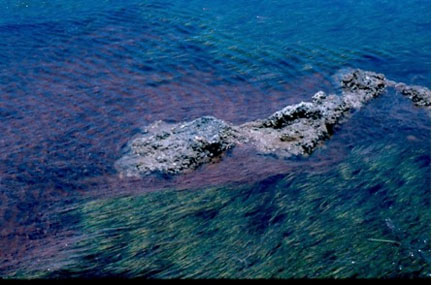 Any angler familiar with the Baffin Bay area knows how dangerous and expensive encounters with the area's rocks and reefs can be. No one wants to replace a prop or lower unit. The upper Laguna Madre lacks oyster reefs, but does have two types of naturally occurring hard bottom habitats, beach rocks and serpulid reefs. Both the rocks and reefs were formed from 300 years to 30,000 years ago. The beach rock is found mainly from Penascal Point south, on the eastern shoreline of the Laguna Madre. The beach rocks are 20,000 to 30,000 years old and are composed of coquina shell fragments, sand and clay bound together. Because these rocks were once the Gulf of Mexico shoreline, before the formation of Padre Island, they are called beach rocks. The serpulid reefs are much younger than the beach rocks, from 300 to 3,000 years old, and are found in Baffin Bay and its tributary bays Laguna Salada, Cayo del Grullo and Alazan Bay.

This second type of hard structure habitat, serpulid reef, was built by a colony or aggregate of tube-dwelling polychaete worms. These worms are called serpulids (after the family of tube-building worms, Serpulidae), and much like coral reef-building animals, make their tube homes out of calcium carbonate. Over time, these tubes build up into very large rock-like reef structures. While there are some living worms still found on these reefs, the reefs are no longer building or enlarging. Scientists believe that the serpulid reefs stopped growing around the same time the salinity increased in the Laguna Madre.

Serpulid reefs are unique and found nowhere else on the Texas coast. Living and growing serpulid reefs occur in only a few areas in the world. There are two types of relict serpulid reefs: patch reefs and reef fields. Patch reefs consist of small, isolated round rocks that are located mainly on the northern end of Baffin Bay. The patch reef height ranges from 1.5 to 6 feet above the bay bottom and are sometimes exposed at low tides. The reef fields are large, irregularly shaped areas of serpulid reef which protrude only slightly above the bay bottom. Because of the buildup of sediments over the centuries, these reefs are more massive than they appear and actually extend several feet or more into the bay bottom. Reef fields are found around the mouth of Alazan Bay and in Laguna Salada.

Like oyster reefs in other bay systems, serpulid reefs and beach rock add a structural component to the upper Laguna Madre ecosystem. This habitat provides complexity and biodiversity, which in turn provides shelter, food and protection for many organisms. Some scientists believe that adding structure or hard substrate to an environment (as in the case of artificial reefs in the Gulf) can increase fish populations. Many anglers believe this and both the serpulid reefs and beach rocks have become favorite fishing spots in the Baffin Bay area. Even though there are many reports of large spotted seatrout being caught near these reef and rock structures, there is no scientific data that verifies this. The success and the quality of fishing that occurs in the upper Laguna Madre are often attributed to the complexity and the community structure that the serpulid reefs and rocks have added to the ecosystem through time.

Even though these important fish habitats have been around for upwards of 30,000 years, they are threatened from a variety of sources, both natural and man-made. Oil and gas development can destroy the rocks through seismic activity. Dredging operations deposit the silt and cover the reefs rocks and associated invertebrate communities. The serpulid reefs are decreasing in size and distribution and continue to face several other threats. Because of the way the reefs were made, they are fragile and easily damaged. The biggest threat is damage caused by anglers and boaters. Collisions by boats and trampling, while wade fishing, causes pieces to break off.

Over time, the amount of large serpulid reefs in Baffin Bay is being damaged and many have been reduced to rubble. Losing these relict reefs and important habitats might mean reductions in quality fishing experiences in the Baffin Bay area. Avoid standing on these reefs, especially the fragile serpulid rocks. Mark the location of the rocks on your marine chart or GPS to avoid hitting them with your boat. It may make a difference between a pleasant fishing day and expensive trip to the repair shop.