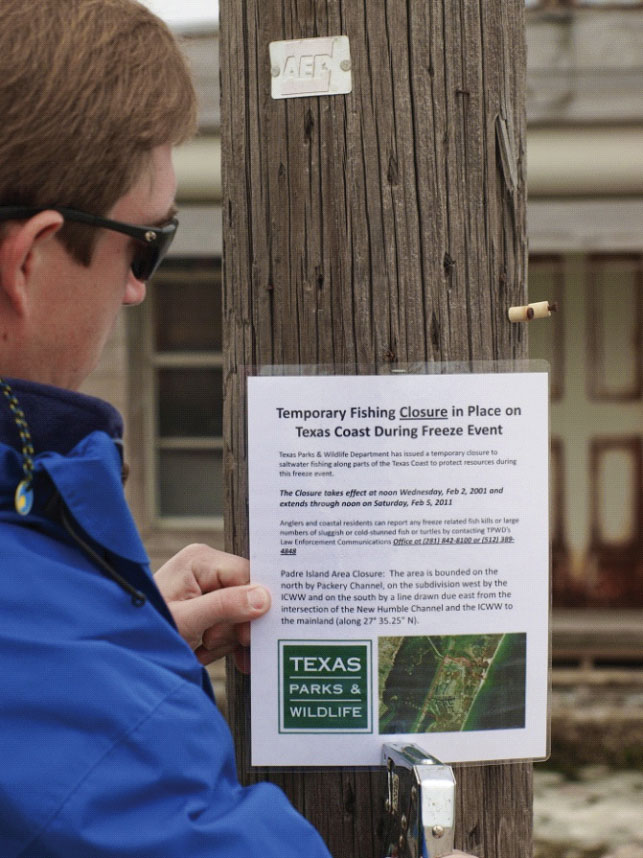 Staff posting thermal refuge closure sign.
In 2005 the Texas Parks and Wildlife Commission approved a proposal giving authority to the Texas Parks and Wildlife Department (TPWD) executive director to close deep water areas along the Texas coast during freeze events. Historically, fish have been observed congregating in these areas, as they act as a thermal refuge providing warmer water than the surrounding shallow flats. This law was implemented for the first time in February 2011, when air temperatures dropped below freezing reaching 22F and water temperatures reaching near 32F coast wide. During this recent freeze, an estimated 30 fish species, totaling approximately 290,000 fishes, were killed, composed of over 82 percent non-game fish including silver perch, hardhead catfish, and mullet. Most of the fish killed in 2011 were reported from shallow water areas along the middle and lower coast with three major bays being the most affected.

The number of fish killed during an arctic wave tends to be higher if the air temperature drops rapidly, rather than if the temperature slowly approaches freezing. When smaller cold fronts come in gradually, fish are able to acclimate, seek refuge, or if possible, leave the bays through passes into the Gulf of Mexico. The duration of the freeze is also a factor in the magnitude of fish killed during the freeze.

When water temperatures drop, fish's metabolism drop, their heart rates slow, and their blood becomes more viscous. Additionally, oxygen molecules become more densely packed in cold water. These factors contribute to an impaired ability of fish to extract necessary oxygen from their surroundings, causing some fish to suffocate and die. Dead fish will sink to the bottom until gases are released into the fish's abdominal cavity through bacterial decomposition, causing the fish to rise to the surface. For this reason, it is not advised to consume dead fish found floating in the water or ashore during a freeze-related fish kill.

Temperature is a major factor in triggering cues for behavior in many fish, including migration, spawning, and feeding. Fish cannot regulate their core body temperature and rely on the temperature of their surrounding environment to maintain an appropriate body temperature. By changing their position in the water column fish can actively regulate their body temperature.
Water has a specific heat five times greater than that of air, which means it takes five times longer for water to change temperature. During events of rapid temperature change, water that is deeper will take longer to cool. Fish will move to deeper waters in search of warmer temperatures. This is also true when the sun comes out; shallow water will warm up faster than deeper water, bringing the fish back to the surface.

In Texas, there are about two million acres of bays and estuaries which are susceptible to freeze. During freeze events, fish may congregate in deeper warmer refuges. Thermal refuge closures are one more management tool that TPWD can implement to minimize impacts and ensure healthy fish populations. During these times it is important to reduce fishing pressure as fish may not only be gathered in these refuge areas, but they may also be stunned and more susceptible to being caught. It is beneficial to protect the fish spawning stock biomass to minimize the effect of a freeze on the overall fishery and to ensure its quick recovery.

The utilization of thermal refuges by fish populations has been documented visually throughout time. There are reports from the 1950's of hundreds of people fishing along different areas using 3-pronged hooks, grabs, and dip nets rather than conventional recreational gears. Some people were even recorded raking in large numbers of stunned fish that may have survived the freeze if left to recover. TPWD staff monitored fishing activity during freeze events and identified 21 areas along the coast that were known as deeper areas where fish tended to congregate during cold events. Today, it is unlawful for anyone to fish within these thermal refuges by any means once the executive director has given notice of the freeze-event closure.

During the recent freeze event, TPWD game wardens patrolled these 21 closed areas to educate and inform anglers about the temporary regulations. TPWD biologist monitored fishing activity within these same areas during the closure. Relatively few individuals had to be notified of the specifics such as dates and boundaries of the closures. Recent observations, research and historical reports indicate these regulations are beneficial to our fisheries during these extreme cold events. TPWD appreciates anglers' compliance with these regulations.

In the past, during these freezing events, the Gulf Intracoastal Canal Association has volunteered to stop barge traffic through the land cut between the upper and lower Laguna Madre. The motive is to prevent the waters of the ICWW, a potential thermal refuge, from being mixed with cold water and to prevent sediment from being uplifted through the prop wash possibly harming stunned fish that congregate towards the bottom. Their effort to operate the waterway in an environmentally sound manner is greatly appreciated.

For more information on Freeze closures visit our website at: http://archive.tpwd.state.tx.us/publications/annual/fish/freeze/