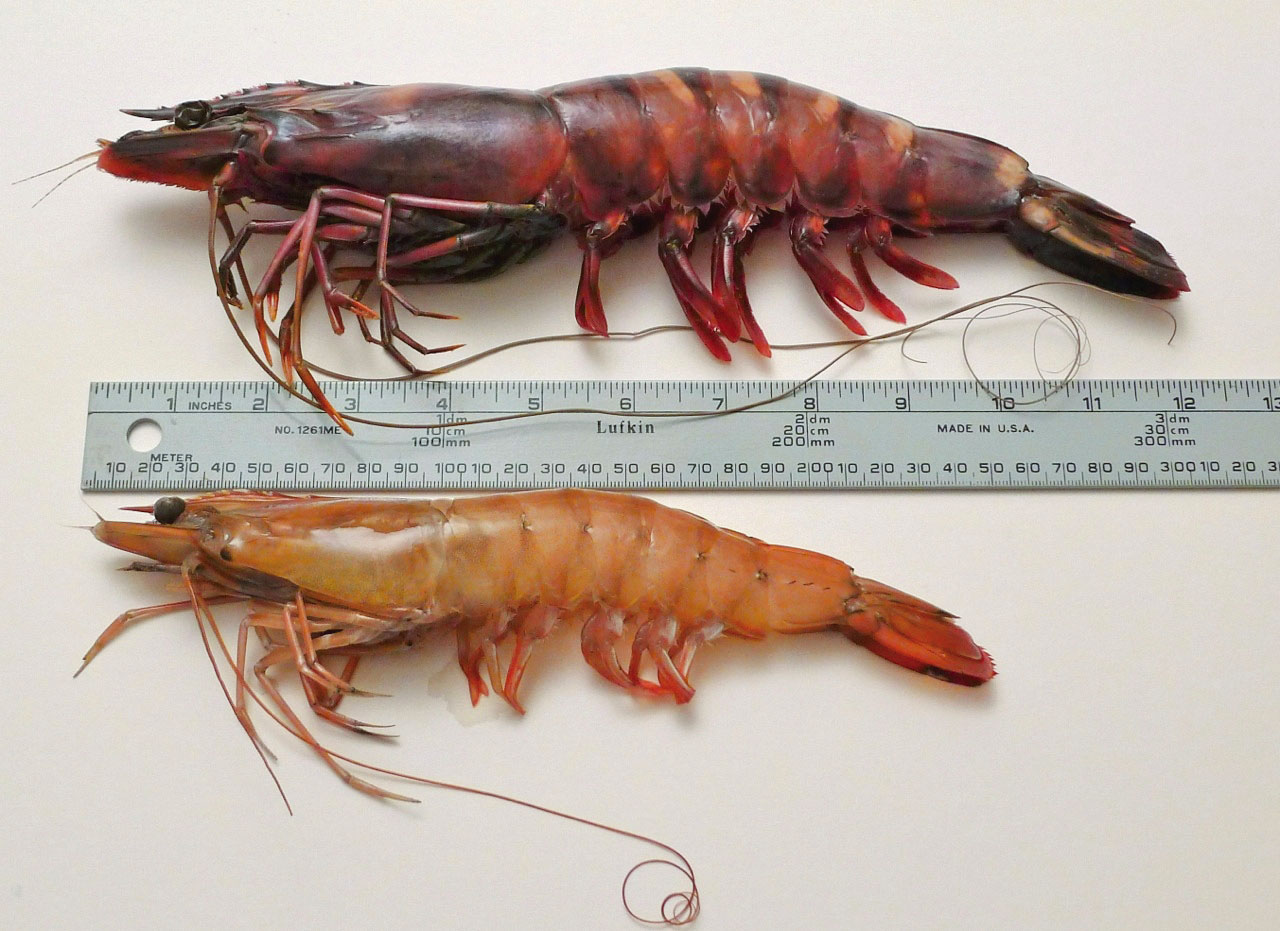 Female tiger shrimp compared to a female brown Gulf shrimp (Photo credit: Tony Reisinger).
The Asian black tiger shrimp is spreading through the Gulf of Mexico, and the presence of this nonindigenous shrimp has scientists concerned. Other invasive species such as lionfish, tilapia, zebra mussels, and nutria already call the region home, and the compounded impacts of these critters on our fragile coastal ecosystems is alarming. Also called giant tiger shrimp, they have an overall rusty brown appearance with distinctive black and white stripes across their backs and tails resembling their jungle namesake. These shrimp can grow to a length of about one foot and weigh 23 ounces within a life span of three years. To accommodate it's "bigger than Texas" size, it has a voracious appetite.

Tiger shrimp are an Indo-West Pacific species distributed over a large range from East and Southeast Africa, through the Red Sea and Arabian Gulf, around the Indian subcontinent, and through the Malay Archipelago to Northern Australia and Japan. In the summer of 1988, nearly 300 tiger shrimp were collected in trawls off the coast of South Carolina, Georgia and northeastern Florida. After that, no sightings were reported for almost two decades. In 2006, tiger shrimp reappeared in the South Atlantic Bight and for the first time ever, in the Gulf of Mexico. Since then, tiger shrimp collections have been reported every year in the Gulf; and it was not until 2011 that the first sighting of tiger shrimp in Texas waters occurred. The number of shrimp caught in Gulf of Mexico from 2006 to 2012 is shown in the following figure.

In 2012, Tony Reisinger (Texas Sea Grant and Cameron County Extension Agent-Coastal and Marine Resources) auctioned off a shrimp print he designed for a Port Mansfield fishing tournament to raise a bounty for the collection of tiger shrimp specimens. Reisinger donated the proceeds to the Brownsville-Port Isabel Shrimp Producers Association. The Association and Zimco Marine also matched his donation to support the bounty. Texas Sea Grant at Texas A&M University printed a "Wanted" poster in English and Spanish to educate shrimpers about Asian tiger shrimp. Reisinger's group offered a bounty reward for the largest, smallest, and most number of tiger shrimp caught and returned by the shrimp trawlers during the 2013 shrimping season. The result was 32 tiger shrimp collected by Texas shrimp trawlers in 2013. Prior to that, Texas shrimp trawlers had collected 9 and 12 tiger shrimp in 2011 and 2012, respectively. The majority of these shrimp have been collected offshore near the Louisiana coast.

A frequently asked question is how did tiger shrimp get into Gulf of Mexico? The introduction of tiger shrimp is thought to have three potential sources: 1) the release of larvae in ballast water taken onboard of seaward vessels; 2) migrations or gulf stream currents from areas in the Atlantic or Caribbean Sea where wild populations have become established (most likely as a result of prior aquaculture escapes) or from South America; and 3) escaped from active and ongoing aquaculture facilities in the western Atlantic. Hurricanes and tropical storms frequently take a path through the Caribbean northward toward the south Atlantic and Gulf of Mexico, which could also present a method of transport.

Another frequently asked question is why should we care about tiger shrimp in the Gulf? The primary concern regarding the impacts of tiger shrimp in the Gulf is the potential to compete with, or prey directly upon native species because of its large size. Tiger shrimp eat young penaeid shrimps, a variety of macro-invertebrates, fish, as well as plant material, and a small amount of echinoderms, and hydroids.

There are concerns about disease transfers in which tiger shrimp can carry dangerous pathogens (e.g., White Spot Syndrome and Yellow Head Virus) that are a significant threat to native Gulf of Mexico shrimp populations. Tiger shrimp are known to carry 16 or more harmful viruses.

Researchers believe that tiger shrimp have spread along the U.S. Atlantic coast and into the Gulf of Mexico because there has been an increase in the number of specimen collections, in the occurrence of individuals that range in sizes (juvenile to adult), and an increase in collections from inshore areas that typically serve as nursery grounds for native brown and white shrimp populations.Solutions to address concerns about invasive species such as the Asian black tiger shrimp in the Gulf of Mexico and our Texas waters requires the team work of our coastal communities. Anglers can help by reporting any unusual shrimp caught in Texas waters, please contact the following for assistance: Leslie Hartman (Texas Parks & Wildlife Department) telephone: 361.972.6253; e-mail: [email protected] or Tony Reisinger (Texas Sea Grant Coastal Extension Agent) telephone: 956.361.8236 ; e-mail: [email protected]. Without your help, it will be tough to keep our Gulf and coastal waters free of tigers.