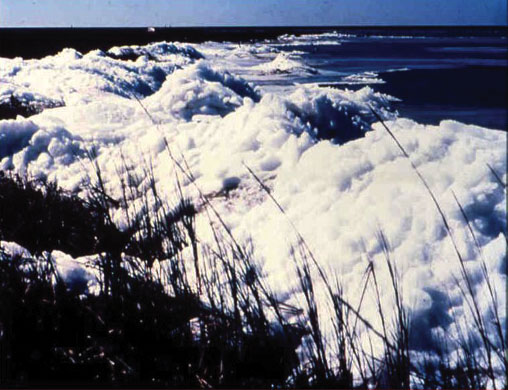 Prior to the 1950s, biologists along the Texas coast were few and far between and getting to a fish kill or even knowing that one had occurred was often difficult. Even though a few historic freezes were fairly well documented, the true extent of the early freezes will never be known since quantitative estimates were never made or data were inadequate. A standardized approach to estimate the number of animals killed during catastrophic events, such as freezes, was developed and used during the 1983-84 freeze and in all subsequent freeze events. Because of this standardization and TPWD staff that are distributed coastwide to respond to these events, we are able to better assess the impacts and respond with appropriate management action, if necessary.

On January 8, 2010 the National Weather Service issued a hard freeze warning for coastal counties creating conditions for a potential freeze kill in coastal waters. With this advance notice, TPWD Kills and Spills Team (KAST) biologists and other Coastal Fisheries staff began preparing for potential coast wide impacts to inland and coastal fisheries resources. TPWD staff began monitoring air and water temperatures and the projected time period for freezing temperatures to occur. During the period of January 8 through January 11 the air temperature in Port Arthur was recorded at a record low of 18 F; the air temperature in Galveston was recorded at a low of 27 F and Corpus Christi hit a record low of 24 F.

A total of 50,971 fish of 18 species were estimated to be impacted during the 2010 freeze event. Table 1 shows the comparison of mortality between freezes from 1983 to 2010. We suspect the weeks of cool weather that preceded the 2010 freeze event (with December 2009 being one of the coolest on record) allowed fish to acclimate to lower temperatures and move to deeper water. The 1983 and 1989 events were preceded by warmer water temperatures and the fish did not have time to acclimate. Day time air temperatures were also higher during the freeze of 2010 compared to 1983. All these factors further minimized the impact on mortality.

The following is an estimate of fish mortality based on field observations and data collected by TPWD staff from the bay systems along the Texas coast. As with previous freeze counts, these are conservative estimates of freeze killed fish.

Sabine Lake
Only one fish kill was reported for the Sabine Lake bay system. Two black drum and 24 spotted seatrout were observed in the Bridge City area.

Galveston Bay
The Galveston Bay system had several reports; most of which were within local bayous and canals. One snook, 32,364 striped mullet, and 105 spotted seatrout were observed.

Matagorda Bay
One snook and 1,000 mullet were observed in Caney Creek within the Matagorda Bay system.

San Antonio Bay
Impacts in the San Antonio Bay system were limited to Espirito Santo Bay and Pringle Lake where 198 spotted seatrout and 1,200 mullet were observed.

Even though the sea turtles were highly impacted, we appear to have been lucky and dodged a bullet with respect to fisheries. Because the total mortality was low for fish species, we don't expect to see major impacts to fish populations. With the Coastal Fisheries long term monitoring program, we will be watching to see if our expectations are correct, especially with more tropical species such as snook and gray snapper. TPWD and other resource agencies will continue to work to determine the impacts of this freeze on the population of the threatened green sea turtle.