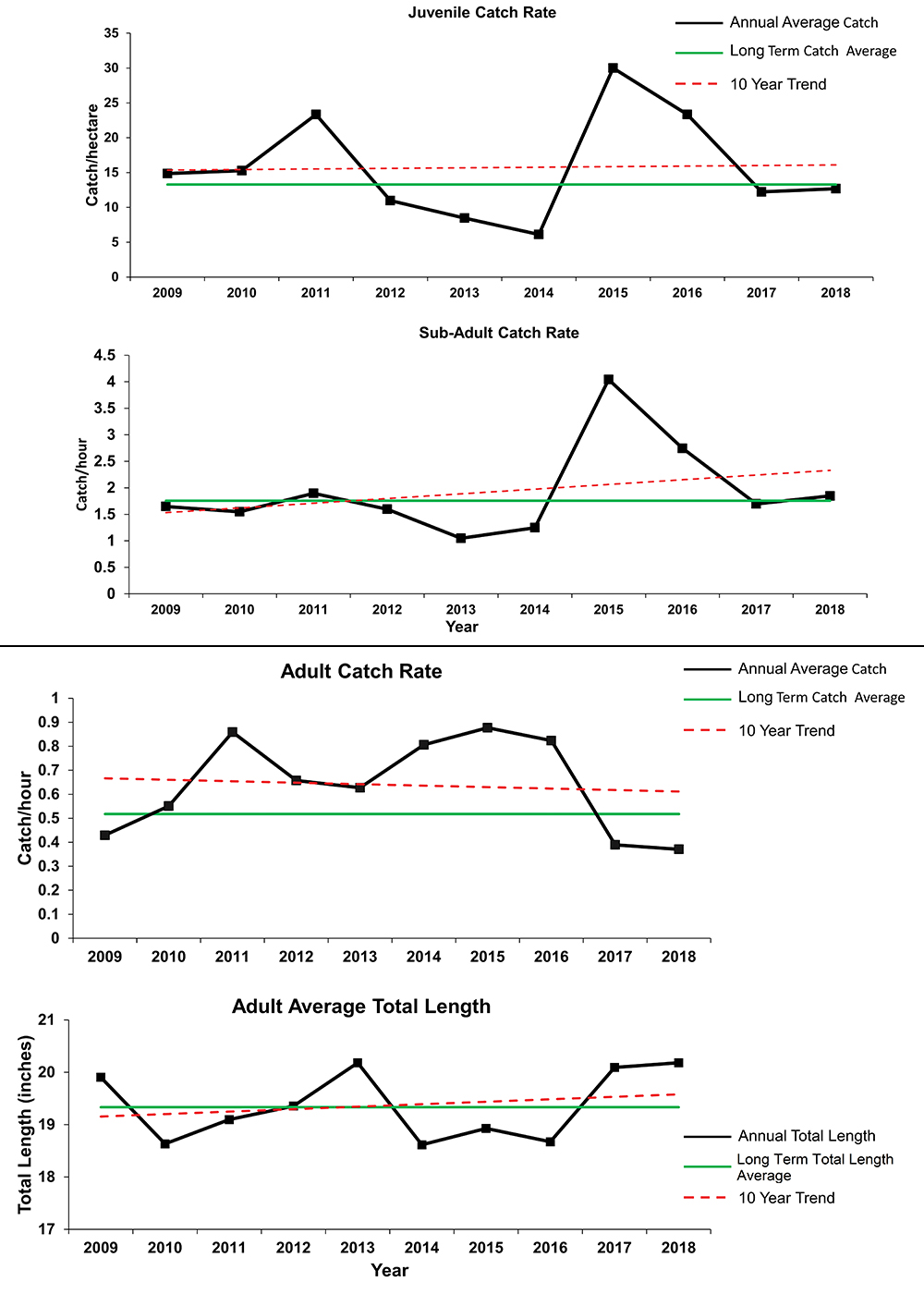 Figure 2 (bottom). Adult annual average total length (inches from snout to tip of caudal fin; solid blue line, right vertical y-axis) and annual average catch rate (catch per hour, solid black line, left vertical y-axis) by year from 2009 to 2018 (horizontal x-axis); Average catch rate for all years combined (Long-term Catch Average) is displayed as the green line, the 10-year catch rate trend (change in catch rate from 2009 to 2018) is displayed as the dotted black line, and the 10-year trend in total length is displayed as the dashed blue line. Fish sampled in 2009, 2013, 2017, and 2018 were significantly larger, and fish in 2010, 2014, 2015, and 2016 were significantly smaller than that of the other years.

One of the most sought-after sportfish in Texas is spotted seatrout. They commonly live nine to ten years and have been aged up to 12 years in Texas. Trout can grow seven to nine inches during their first year depending on their sex, temperature and salinity, and food availability; most are sexually mature by two years old, which is generally around 14- to 17-inches long. Spawning typically occurs in deeper water sections of bays adjacent to shallow flats and seagrass beds. The spawning season lasts from late spring to early fall with peaks in June and September. After hatching, newly settled juveniles are found in seagrass beds, salt marshes, and along marsh edges.

A great place to catch spotted seatrout is the Upper Laguna Madre (or “ULM”). The ULM ecosystem stretches just over 60 miles from the southern extent of Corpus Christi Bay, south to the southern end of the Land Cut, including Baffin Bay. The ULM is a popular fishing destination because of the habitat it provides trout and other sport fish. Texas Parks and Wildlife Department (TPWD) fisheries independent sampling in the ULM ecosystem has been conducted for almost 45 years, and the data obtained from these sampling efforts can be used to examine trends to better understand the status of coastal aquatic populations such as trout.

The Upper Laguna Madre ecosystem team examined the catch rates of trout from three sampling gears which target different life stages (juvenile, sub-adult, and adult) in the ULM between 2009 and 2018, to identify patterns or fluctuations in catch. Catch rates are a measure of the number of fish caught for the amount of time or area sampled.  Juvenile catch rates are measured by area, in hectares, while sub-adult and adult catch rates are measured by time, in hours. Over the most recent 10 years, five had juvenile catch rates that were higher than the long-term average, of which 2011, 2015, and 2016 were significantly higher than that of the other years. There also appears to be cycles of high and low numbers of juveniles entering the population every two to three years (Figure 1).  The years with the lowest juvenile catch rates, 2012 through 2014, coincide with a severe drought when salinity was higher than average (37.6 ppt) in the ULM. The drought ended during spring of 2015, and increased rainfall lowered bay salinity to more optimal conditions with salinities closer to average, which may have contributed to increased survival and higher catches of newly recruited trout (Figure 1). However, the number of juveniles caught decreased after 2015, which coincides with a period of decreased rainfall and increased salinity.

Sub-adults follow a similar pattern of decreasing catch rate during the same time-frame of the drought. In addition, sub-adult catch rates in 2015 were higher than that of other years. For adults, the 10-year catch rate trend shows a general decrease, which may be influenced by the large decline in 2017 and 2018. This large decline may have been a result of decreased recruitment due to higher than average salinities during the prolonged drought. Despite this decreasing trend, there were six continuous years with record high catch rates during the same time frame, which is encouraging. Of those six years, the catch rates of adult trout in 2011 and 2016 were significantly higher than the other four record years. Similar to juveniles and sub-adults, adult catch rates appear to fluctuate every two to three years (Figure 2).

During years with relatively high catch rates, the average total fish length (tip of snout to the end of the caudal fin) is relatively low; however, during years with relatively low catch rate, the average total length is relatively high. Years with large numbers of smaller fish are a result of a strong recruitment year with high survival of juveniles and can make a group or cohort that can be tracked in the data as the fish age. Adult trout caught in 2017 and 2018 were significantly longer than that of other years, but there were fewer individuals caught overall (Figure 2). So, for the last couple of years it appears that there were fewer but larger trout.

Due to our ongoing collection efforts, Texas Parks and Wildlife is able to monitor population trends at varying time scales for fish, such as the spotted seatrout, throughout the Texas coast. Over the past 10 years, the trout population has shown years of higher and lower recruitment of juveniles, years with high numbers of adult fish, and years with low numbers but larger individuals. While there is still more to be learned about what other factors affect trout populations, with this knowledge in hand, Texas Parks and Wildlife can continue to effectively manage our natural resources for the continued enjoyment of future generations.