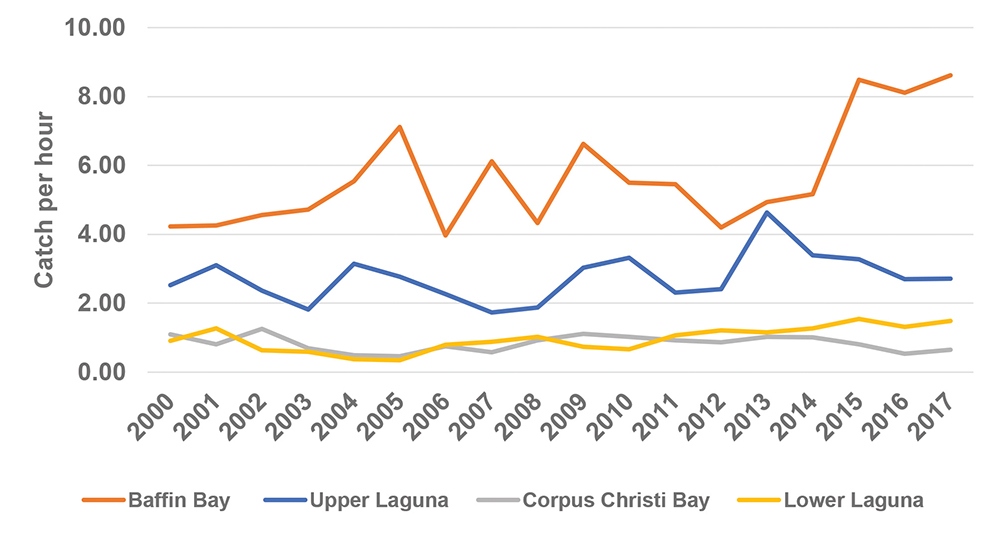 Baffin Bay is a small section of the Upper Laguna Madre bay system, and it is located south of Corpus Christi along the Texas coastline. Baffin Bay and the Upper Laguna are separated from the Gulf of Mexico by North Padre Island, and they have limited water exchange with the Gulf. Since there are no rivers or streams that input fresh water into this area, this entire system can occasionally be hypersaline, which is when bay water becomes saltier than oceanic seawater. In fact, surface evaporation in the summer combined with persistent drought can cause Baffin Bay to be one of the saltiest marine systems on earth. Often, organisms that inhabit ecosystems with such extreme environmental conditions adapt by changing basic features of their biology. These changes can be driven directly from experiencing environmental cues in real time or indirectly through genetic changes in the population over multiple generations. Extreme salinity conditions are likely to drive both types of change in organisms that inhabit Baffin Bay, and among them, black drum (Image 1) are a great example of fish adapting to their environment.

The uniqueness of black drum in Baffin Bay was glaring in 2012, when there was a mass emaciation event in the population that corresponded with extreme hypersaline conditions. During this event, fishery researchers, anglers, and commercial fish houses alike observed malnourished black drum from Baffin Bay; individuals showed symptoms of gelatinous fillets, reduced muscle tissue, and empty stomachs. The problem was so widespread that commercial fish houses in the area would not purchase black drum landed in Baffin Bay. Research into this event suggested that it was caused by the black drum population becoming so large that it became overcrowded, and exceeded the capacity the bay could support. In fact, Baffin Bay supports a black drum population that is several times denser than anywhere else in the surrounding area (Figure 2). Due to this heavy burden on the system, occasional hypersaline events, like the one in 2012, can result in a temporary drop in the number of prey species inhabiting the bay, meaning the numerous black drum may not be able to find enough food to support such an expansive population.

Additional research performed by biologists from the Harte Institute at Texas A&M recently found that movement of black drum in Baffin Bay is heavily restricted when extreme salinity conditions are reached, making them less likely to move out of the area. In addition, the timing of spawning of black drum in Baffin Bay is also unique. Research by TPWD has shown that both males and females become sexually mature at an earlier age (and hence a smaller size) in Baffin Bay than other bays, and this was true even when black drum from Baffin Bay were compared to black drum from the adjacent Upper Laguna. Fishery theory suggests that spawning at an earlier age and smaller size can be a common adaptation in unstable or extreme environments. Spawning earlier in life allows fish to have more spawning opportunities, and it increases the odds that their offspring will support the next generation.

The findings from this work are preliminary, and the implications for management of black drum in Baffin Bay are not yet entirely clear. However, this information can be used by fishery managers to make predictions about whether black drum in Baffin Bay might respond differently to environmental change than those elsewhere in the Laguna Madre or beyond. At the very least, our finding supports the idea that black drum in Baffin Bay are different than other populations in Texas, and they have unique biological features not seen anywhere else. The next time you cast a line in Baffin Bay and hook up with a big black drum, take a moment to marvel at the potential that the fish you just caught is a bona fide Texas original!