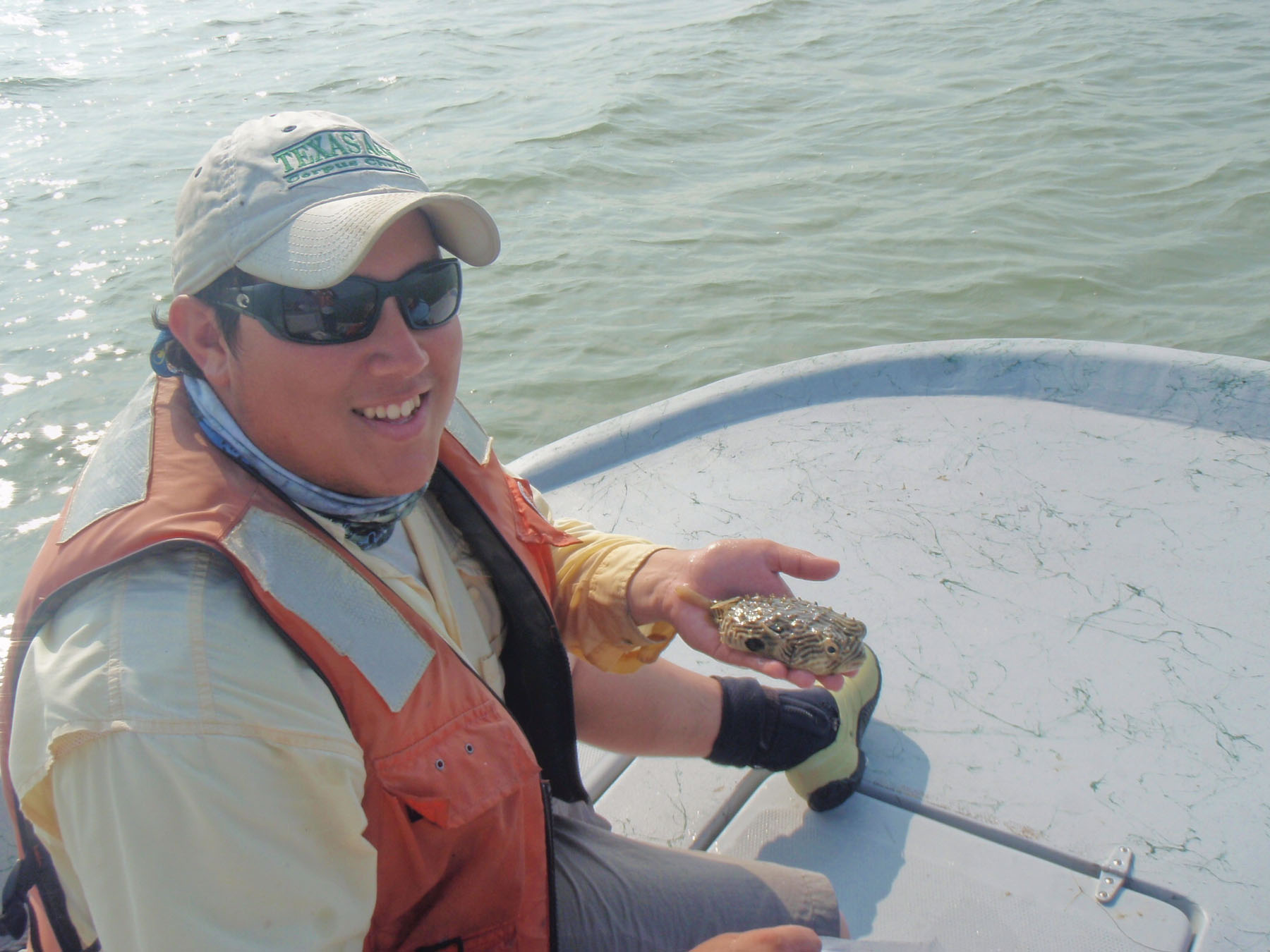 Picture a beautiful morning along a shoreline in Aransas Bay. You get out of your boat for the days first wade, shuffling through the clear waters hoping to catch some fish. You observe well-known species like mullet, blue crabs, and the occasional shrimp popping out of the water. This is soon interrupted as you get your first strike. A feisty spotted seatrout, the most sought after species of the Texas coast. This scene is played out daily in Texas bays, but as a fisherman, do you ever wonder what other species are in our waters or the habitats they utilize? As an intern for Texas Parks & Wildlife Department, Coastal Fisheries Division, I learned the importance of diverse habitats and the role they play in our fisheries.

Aransas Bay is one of the eight major Texas estuaries and is physically and biologically diverse. In comparison to estuaries like the Laguna Madre, mostly comprised of seagrass beds, the Aransas Bay ecosystem hosts an array of habitats that include oyster reef, salt marsh, seagrass, and open bay bottoms. These habitats provide crucial ecosystem services and influence the community of organisms in the estuary.

Oyster Reefs The eastern oyster is an important species that forms extensive reefs in Texas bays. They are ecologically important as filter feeders that improve water clarity and quality by removing excess nutrients and pollutants. Oysters also play an important role in influencing the community structure of estuaries. Compared to other habitats, oyster reefs are unique: they are three-dimensional structures providing refuge from predators. While collecting dredge samples, I observed fish such as the gulf toadfish, crested blenny and naked goby in low abundance. However, crustacean diversity and abundance was much greater and included grass shrimp, brown shrimp, blue crab, green porcelain crab, and gulf grassflat crab. A factor that likely contributed to the dominance of crustaceans was the area around reefs was comprised of mud bottom and the reefs provided refuge that the surrounding habitat could not offer.

Salt Marsh This habitat, commonly found along shorelines, is mainly comprised of cordgrass. The services this habitat provides are bio-filtration thus reducing pollution and shoreline stabilization by inhibiting erosion. This habitat provides excellent cover and food for numerous juvenile species with its complex root structure. Decaying plant matter, known as detritus, settles to the bottom and is regularly consumed by many species. The diversity of shrimp and crabs was low but their abundances were high. The most abundant was the grass shrimp which is a common grazer of detritus. Though fish were not as abundant as the crustaceans, there was greater diversity. Species not commonly found in other areas of the bay included the longnose killifish, gulf killifish, sheepshead minnow, and mosquito fish. Throughout the summer we continued to catch juvenile spotted seatrout in the salt marsh.

Seagrass All five species of seagrass exist in Aransas Bay: shoal grass, turtle grass, star grass, manatee grass, and widgeon grass. Seagrass is essential habitat that stabilizes soft sediments and provides oxygen through photosynthesis. Though seagrass is not as structurally complex as oyster reefs, it serves as critical nursery grounds for numerous species. In comparison to oyster reefs and salt marsh, I saw the greatest abundance and diversity of species in this habitat. Although numerous species of fish were collected, I commonly found six species, including spotted seatrout, pinfish, striped mullet, inland silverside, black drum, and red drum. Common crustacean species were the blue crab, brown shrimp, white shrimp, and grass shrimp. In comparison to species in other habitats, the organisms collected in seagrass were mostly juveniles.

Open Bay Seemingly featureless, open bay bottoms are a dominant habitat of the estuary and host to organically rich sediment constantly influenced by wind and tidal currents. This process is ecologically important as nutrients are re-suspended throughout the water column attracting numerous species of fish and crustaceans. The abundance and diversity of fish was greater in the open bay than from samples from other habitats. Species encountered were the bay anchovy, spot, Atlantic croaker, hardhead catfish, pinfish, and silver perch. With the exception of the bay anchovy which feeds on plankton, all of these species feed on shrimp and crabs that bury themselves in the substrate.

One way to assess the health of the ecosystem is by measuring abundance and diversity of species. It was evident that diversity varied among the habitats, which indicates that organisms may rely on a specific habitat for survival and growth. The diverse habitats found in the Aransas Bay ecosystem are important both ecologically and in terms of the ecosystem services that they provide. These processes contribute to the continued health of our bays and the species that depend on them. Despite the numerous challenges that they face, estuaries are some of the most productive ecosystems in Texas.

Common and scientific names of some plants and animals routinely encountered while sampling certain habitats.