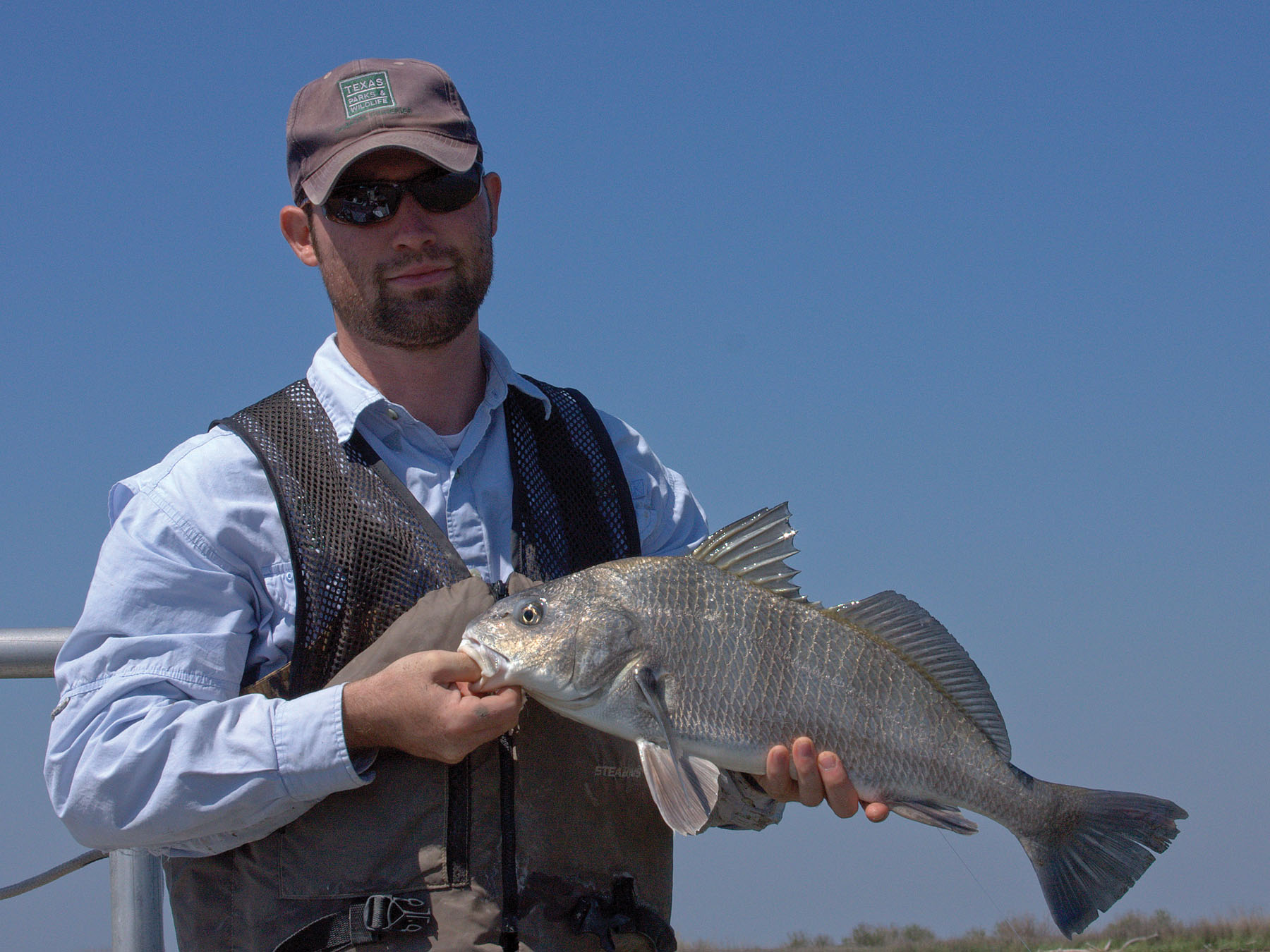 So a Texan, a Cajun, and a Mexican go fishing together, and pretty soon the Texan catches a large croaking fish with black stripes and whiskers. Tex drawls, "Pards, I caught a drum." Boudreaux says, "Mon ami, that's a gaspergou." Juan disagrees, "No senõr, that's a tambor." About that time, a biologist pulls up and says, "I see you have captured a Pogonias cromis."

It sounds like the beginning of a bad joke, but it's something fisheries biologists deal with on a regular basis. In the example above, everyone is indeed talking about the exact same fish. Most coastal Texans will call the fish a "drum" which comes from the official common name, black drum. The drum refers to the deep croaking or "drumming" sound that the fish makes. Unfortunately, inland residents not familiar with saltwater fish lingo are just as likely to call a red drum a "drum" instead of "redfish" or "red" like the locals do. The Cajun name, "gaspergou" is a corruption of the French "casseburgau" which means mussel breaker referring to the black drum's diet of bivalve mussels. Unfortunately, "gaspergou" is more often applied to the freshwater drum, an altogether different species. And "tambor," is simply the Spanish word for drum. Confused? It's no wonder. With Texas's amazing cultural diversity, making sure everyone is talking about the same critter is a daunting task.

I never truly appreciated the importance of the scientific (or Latin) name until I moved to Texas. When I worked in the Appalachian Mountains, any given fish had a scientific name, a common name, and maybe one regional name. However on the Texas coast, a fish is likely to have at least three local names plus the official common and Latin names. The Latin name is an age old solution to the global version of our fish argument. In the 1730's, Carl Linnaeus developed a standardized naming system to avoid confusion amongst scientist. Now known as binomial (bi- = two; -nomial = name) nomenclature, each organism gets two names. The first name gives the organism's genus and should always be capitalized. The second name gives the species and should always be lower case. So, the black drum, Pogonias cromis, is a fish in the genus Pogonias with the specific name of cromis to distinguish it from other fish in the same genus.

But why Latin? Nobody has grown up as a native Latin speaker since the ninth century A.D.! However, when Linnaeus developed his binomial nomenclature system, every educated person in the Western world understood Latin and this persisted until the last century. Much as English is the international language of aviation and every air traffic controller the world over is expected to speak English, Latin was the international language of science and any scientist was expected to understand it. So a biologist who came across a reference to Pogonias cromis would recognize that Pogonias meant bearded. This refers to the fish's chin barbels which he uses to locate food on the seafloor. He would also know that cromis had to do with color, probably referring to the coloration of the black drum. A colored fish with whiskers would be an accurate way to describe a black drum and would be understood by anyone with a classical education which included Latin.

Now that you've got the lingo down on black drum, try a couple of more fish name conundrums.

Southern kingfish - Menticirrhus americanus. This is a rather grandiose name for a tasty little bait stealer with one barbel on his chin. You probably know them as "whiting." Unfortunately, there are a number of fish that have "whiting" in their official common name and none of them are caught on the Texas coast. But isn't a kingfish the big offshore gamefish that all the tournament anglers target? Nope. Sorry, but that's a king mackerel (Scomberomorus cavalla). If only we all spoke Latin, the Southern kingfish's name is quite descriptive and there would be little confusion. Menti- refers to the point of the chin. -cirrhus means barbel. An American fish with a barbel on his chin.

Red drum - Sciaenops ocellatus. The red drum, or "red," is a popular gamefish with an large spot on his tail and is colored…orange. Again, the uninitiated often confuse these with red snapper which is more widely known due to its popularity as restaurant fare. Sciaenops come from the Greek word skiaina which roughly means "shadowy fish." Ocellatus refers to the eyespot, or ocellus, on the fish's tail. But isn't it a "Latin" name? To add another twist to the name game, many of the names are Latinized versions of Greek words.

TPWD Coastal Fisheries biologists routinely use the American Fisheries Society (www.fisheries.org) publication Common and Scientific Names of Fishes from the United States, Canada, and Mexico for the "official" common names for North American fishes. Those of you who find etymology and phylogeny fascinating, the Integrated Taxonomic Information System (www.itis.gov) is a multi-nation collaboration to make sure we're all using the same names for all species (not just fish.) Finally, if you are interested in learning more about local coastal species, check out the TPWD home page http://www.tpwd.state.tx.us/landwater/water/aquaticspecies/marine.phtml.