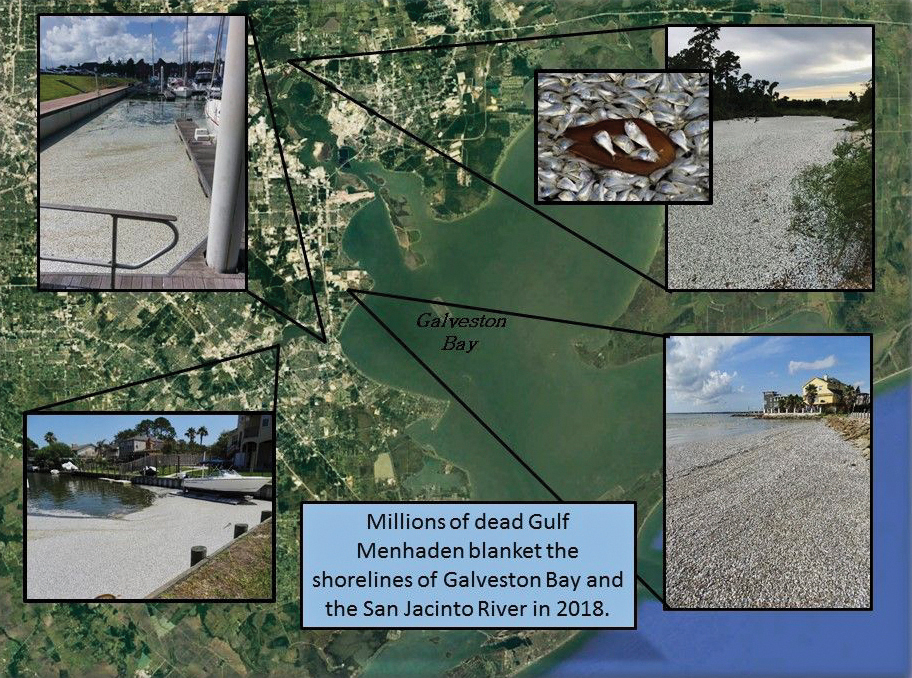 Are fish kills on the rise in Galveston Bay?

The Upper Texas Coast has had its fair share of fish kills in 2018. The Texas Parks and Wildlife Department’s (TPWD) Coastal Fisheries Ecosystem Resource Program staff investigated 26 different fish kills in 2018, which is more than previous years (Figure 1). These fish kills occurred between the months of May and December at 18 different locations along the upper Texas Coast. The species observed most often in the fish kills were juvenile Gulf menhaden (Brevoortia patronus). In June, millions of menhaden washed up along the shores of Kemah and Seabrook. Several canals and marinas along Clear Creek, a tributary of Galveston Bay, experienced several large-scale menhaden fish kills this summer. In August, millions of juvenile menhaden died in the San Jacinto River. The majority of the fish kills were caused by low dissolved oxygen levels in the water. Gulf menhaden are very sensitive to low dissolved oxygen (DO) levels and degrading water quality.

Why do fish kills occur?? Fish kills can occur when water conditions become unsuitable for organisms to survive. These conditions can be caused by natural environmental fluctuations, such as temperature change, low dissolved oxygen in the water, or because of human interactions with aquatic habitats. The first sign of this is often fish floating and washing up on the shore.

What is dissolved oxygen in water you may ask? Just like humans need air with a high enough concentration of oxygen to breath, most organisms with gills need to have adequate levels of oxygen saturating the water to respire efficiently. Under normal conditions DO levels are generally between 4.0 and 8.0 mg/L. At 3.0 mg/L, many species will begin to show signs of stress such as “gasping” at the surface of the water. Below 2.0 mg/L, less resilient species of fish and invertebrates will begin to die. At less than 1.0 mg/L, even the hardier fish such as gar and catfish are impacted. Even temporary low DO conditions can stress fish where they become more susceptible to disease and parasites and result in a fish kill. The DO levels can fluctuate for several different reasons.

High temperatures and low circulation are an issue because oxygen solubility and water temperatures have an inverse relationship. As water temperature rises, the amount of oxygen in the water decreases. This is why most naturally occurring fish kills happen during the hottest times of the year. High temperatures partnered with stagnant water conditions is a deadly combination. Oxygen penetrates the water column by interacting with the atmosphere through wave action, wind, and flowing water. Many of the fish kills occur in warmer months and in low flowing canals, marinas, ponds, or other areas with little to no mixing.

Areas of high agricultural, commercial, residential or industrial development, found along much of the Texas coast, can be contributors to nutrient runoff after heavy rains. These extra nutrients in the water act as a fertilizer to native or harmful algae resulting in massive explosions of their populations. These algae photosynthesize, removing carbon dioxide from the water column and release oxygen into the atmosphere and water. This results in high DO levels in the water when the sun is shining. However, at night, with no sunlight, algae use oxygen from the water for their respiration resulting in lower DO levels. When these algae begin to die, they sink to the bottom of the water body and begin to decay. This decomposition further reduces the DO concentration at the bottom of the water column affecting benthic communities. The majority of fish kills associated with high amounts of algae in the water occur during the early morning hours, just before sunrise, when DO levels are at their lowest.

One might ask: Are the increased number of Gulf menhaden kills due to increased populations of these fish during 2018? TPWD sampling (bag seine and bay trawl) data collected over the last 40 years, did not indicate an abnormal year for 2018. However, continuous water quality data, collected within Galveston and Trinity Bays by TPWD and the Texas Water Development Board (TWDB), confirm over the past 30 years water temperatures in the bays have been increasing. There was also a slight decrease in DO observed at one sampling station located in Trinity Bay in 2018.

Although it is not clear why there were more reports of fish kills in Galveston Bay and surrounding tributaries in 2018 than in previous years, TPWD is documenting these occurrences and continuing to determine possible causes.

Regardless of other contributors, if temperatures continue to rise, dissolved oxygen levels will continue to decline. This decline will likely contribute to an increase in fish kills, especially effecting sensitive species such as Gulf menhaden.

If you observe a fish kill in your area or a pollution event, please contact TPWD’s Austin Communications hotline at 512-389-4848.