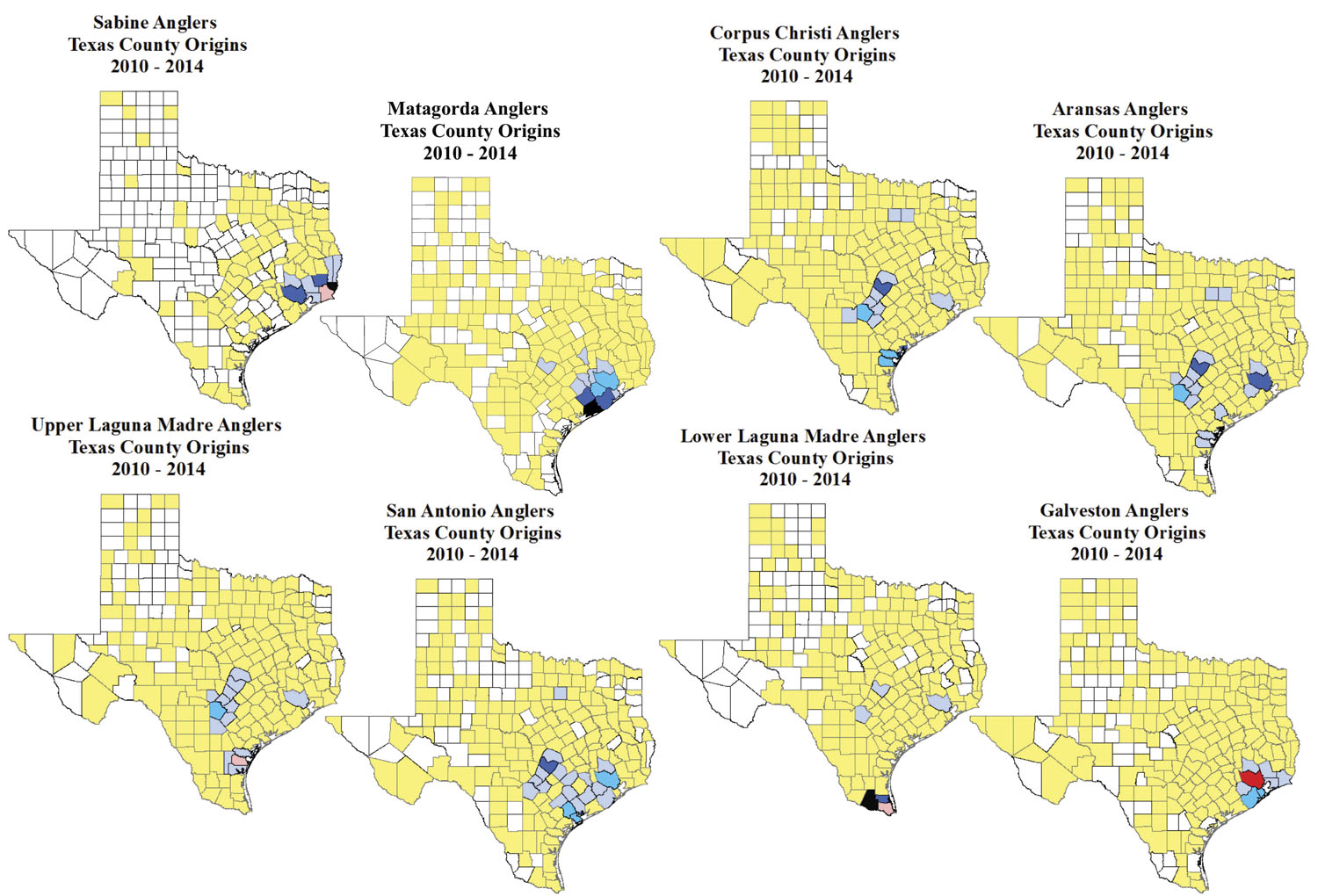 Angler origin maps.
Editor’s Note: If this presentation from TPWD looks familiar it would be because we ran part of it last month. Unfortunately, during layout and proofing some of the angler origin maps were omitted. We decided a full rerun was in order so, here you go.

Does it look like there are too many boats on the bay to you? If you're a half hour late getting on the water are there already three boats sitting on your favorite fishing hole? Where did all those people come from? Well, you've come to the right place, TPWD-Coastal Fisheries has collected that exact information, from you. No, we didn't tap into some NSA database. Remember when a TPWD surveyor met you at the ramp with several questions about your trip? One of those questions was, "What county do you live in?" With that information we can show the residence county for all the anglers we encounter during our routine, coastwide surveys. Don't worry, we don't ask about names, addresses, phone numbers, or any other private information, just the county. TPWD-CF has been collecting this information since the seventies. Now, about all those boats.

Look around on this and adjoining pages and you'll find some Texas maps. There is a map for each of eight bay systems on the Texas coast where we conduct angler surveys, along with a 9th map from the University of Texas, Perry-Castaeda Library Map Collection to identify the counties. Using the color legend you can see where all those boats, or more precisely people, came from and were interviewed after fishing that bay system. For example, on the Galveston Bay area map it's easy to see that Harris County residents account for between 50% and 60% of the anglers interviewed in that area from 2010 to 2014 with the count representing the number of counties in that percentage category. However, not all the angler trends are as easy to follow. Although nearby counties are always prominent in angler origins, anglers often drive long distances to fish an area. Let's look at some angler origin notes for eight different bay system destinations along the coast.

Sabine Lake: As expected Jefferson County is the top angler origin county for this estuary at the end of the Sabine and Neches rivers. Sabine Lake also has a higher out-of-state angler origin than the other estuaries. Of the anglers intercepted on the Texas side, almost 2% claim Louisiana as home. Also, a substantial number of anglers come from as far away as Harris County to fish this border bay. As we will see, Harris County is an important source of anglers for several estuaries.

Galveston Bay: Being located adjacent to the 4th largest city in the country it's predictable that most of this bay's anglers call Harris County home. Most of the remaining anglers come from counties very close to the estuary with relatively few anglers traveling long distances to fish the Galveston Bay system.

Mid-Coast Bays: (East Matagorda, Matagorda, San Antonio, Aransas, Corpus Christi, and Upper Laguna Madre): Anglers using these bays typically come from nearby counties and the I-35 corridor between Austin and San Antonio. Harris County (Houston) also contributes substantial numbers to all of these bays. Additionally, the Dallas-Fort Worth area is well represented in the angler populations of San Antonio, Aransas, and Corpus Christi bays.

Lower Laguna Madre: The Lower Laguna Madre is different from the other bays in that only three local counties contribute a substantial number of anglers. However, Bexar, Harris, and Travis counties all contribute meaningfully to that angling community, indicating anglers find the area attractive enough to travel long distances to fish here.

Other interesting observations are also possible from this database. Aransas and Corpus Christi Bays each tied for having the most counties represented during the 2010-2014 survey period with 213 of a total 254 Texas counties. Sabine Lake had the least number of counties with 99. Only three counties didn't show up during the 5-year period reviewed: Deaf Smith (Texas panhandle), King (northcentral Texas), and Throckmorton (northcentral Texas). More broadly, all bay systems had at least 26 states represented with the Aransas Bay system leading the way with all 50 being recorded. Lastly, all bay systems had at least one foreign country in their database, highlighting the fact that angler origins are as diverse as the habitats along the Texas Coast.