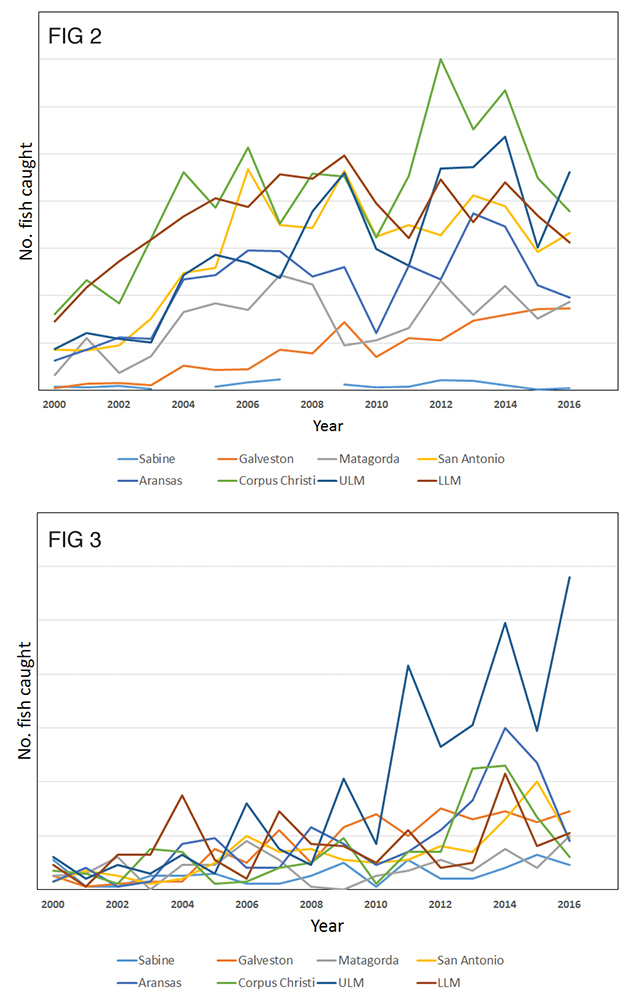 Have you ever cast out into the flats or surf, felt a hard tug followed by a thrashing of water, seen a shiny flash breaking the surface, and felt your heart begin to pound in anticipation of a fight with a tarpon?You may have just hooked the tarpon’s less glamorous cousin, the poor man’s tarpon or ladyfish. But there is not much about this fish that is lady-like…expect blistering runs, aerial displays, and a “never say die” attitude while on the end of your line.

The ladyfish (Elops saurus, Figure 1), a common species found in Texas bays, passes, and the nearshore Gulf, are commonly known as skipjack, horse mackerel or tenpounders.Kin to the more popular gamefish tarpon (Megalops atlanticus), these two species belong to the Order Elopiformes, and Families Elopidae (tenpounders) and Megalopidae (tarpons).The origin of the Latin name Elops saurus comes from the Greek words ‘ellops’ (a kind of serpent) and ‘sauros’ (lizard).

Ladyfish, a saltwater and brackish water species, range from the North Atlantic Ocean, Gulf of Mexico, Caribbean Sea, to the Atlantic coast off Brazil, and Fiji in the South Pacific.Off the Texas coast, the females spawn in the Gulf during the spring, the eggs develop into a unique larval form known as ‘leptocephali’, and the adults can reach a maximum length of almost three feet.Present in coastal waters year-round, their greatest abundance occurs in late spring to early fall.

Ladyfish are not desirable as table fare, but provide great sport, and make excellent cut bait for red drum, sharks, and stingrays.They school in large numbers in the surf during the summer and fall, and are often caught under “working” birds.Despite their aerial acrobatics, ladyfish often frustrate trout and redfish anglers, as demonstrated by the following comments from fishing blogs:

“The best way to catch a skipjack is to go fish somewhere and try to catch trout and reds.”

“These fish should be used for fertilizer; I can’t stand ‘em!”

Love them or hate them, more and more anglers are recognizing their value as cut bait for other species. During our angler surveys at boat ramps, TPWD staff have noted that it is fairly common to observe a cut up ladyfish alongside a limit of red drum in anglers’ coolers, evidence that anglers are taking advantage of ladyfish as red drum bait.

The current state record for ladyfish is 5.70 pounds, 28.75 inches, caught in Aransas Bay in 2008 using live shrimp.Water body records are in place for most Texas bays and the Gulf of Mexico, although there are several fly fishing, bowfishing, catch and release, and junior angler categories with no current listing for ladyfish.TPWD certification methods for state and other records can be found at http://tpwd.texas.gov/fishboat/fish/programs/fishrecords/categories.phtml.