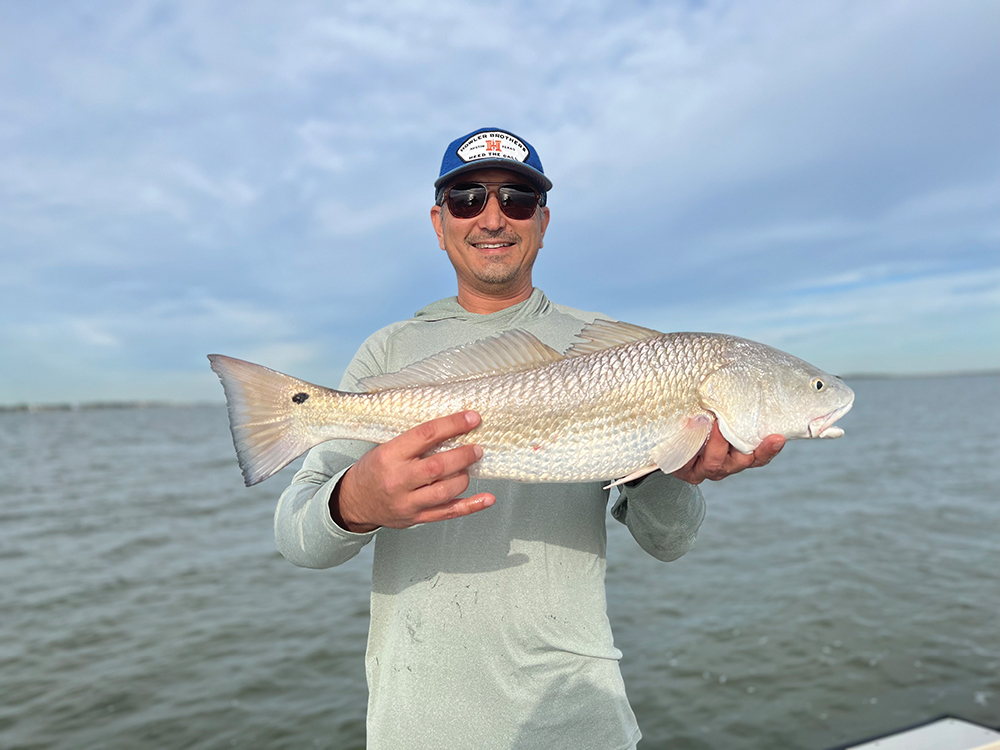 Tom Dixon was able to trick a few reds and trout while chunking Bass Assassins to active bait near a bayou mouth.

“So I guess you probably take off during the winter?” This is a question I get often from folks; many people associate good fishing with summertime. I’ve even heard some people declare “It’s fishing season!” upon the onset of warmer weather during late spring / early summer. In reality, I would say that winter fishing is better by a fair margin, not only for numbers but also for better quality. This seems especially true for early winter. I guess this is why December has become one of my favorite months to fish for trout in Galveston and East Matagorda Bays.

Some of my most memorable trips have been during this time of year. One such trip is when my good friend, Jake White, teamed up with me to fish the Specktacular Trout Tournament on the chilly morning of December 9, 2006. While there are many above average days that come to mind, this day on the water seems to stand out more than others, not only because I was fishing with a good buddy and it was during a tournament, but the big trout and redfish bite we experienced that day may never happen for us again. It was truly an epic day!

As astute anglers I believe we should always want to know the reasons for great catching days. Likewise, we need to also evaluate the factors that we think contributed to fishing trips that didn’t quite measure up to our standards. Understanding all of the moving parts that were involved in producing the end results is a major leap for any willing angler trying to reach the pinnacle of being an exceptional fisherman as opposed to just being average. It’s what separates those who just look at a calendar from those who are willing to match every piece of the jigsaw puzzle until each one snaps into place perfectly. So let’s walk through the influencing factors leading up to that exceptional day of fishing.

December water temperatures in Galveston Bay typically range from the mid-50s to upwards of 62°. On December 9, 2006 the air temperature was 45° and the water temperature was 47°. We had a somewhat below average amount of rainfall for the first six months of that year and then July through October helped us get back on track towards our normal average of about 51 inches annually (Galveston). October alone dumped almost 12 inches of rain on Galveston. November was very dry but the cold fronts started coming the first week and continued at least weekly throughout the entire month. Most of these fronts brought strong northwest winds which provided a good flushing of the estuaries with each passage. December started out the same with a big front to start the month, then another that pushed through on December 8. This particularly cold blast came one week after an arctic front had dropped air temperatures down into the low-30s and surface water temperatures down to the upper-30s.

Excessive rainfall during the month of October that year helped accelerate the exodus of white shrimp and other forage species out of the rivers, marshes and back lakes. In addition, trout temporarily sought higher salinities in the lower reaches of Galveston Bay proper as well as West Galveston Bay. Not only did earlier than usual strong cold fronts continue to drop water temperatures but the heavy concentrations of predator fish and baitfish (and shrimp) that were already in place because of salinity changes became concentrated even more as water temperatures dropped. These stronger fronts brought high northwest winds causing tide levels to drop. This further concentrated fish into mud and shell guts near deep water.

Jake and I stuck the Power Pole where we could cast into a shallow gut that had carved its way through a small break in a reef through the years due to tide and wind driven current. This gut through which the current flowed was just less than 3 feet deep but got deeper as it fanned across a shell flat that intersected with a deep area of about 7 feet lined with oysters and mud. The tide had gotten very low from the front the day before and now the wind had switched from northwest to northeast at about 15 mph, which meant the tide was screaming back in, adding yet another favorable element.

I’ve mentioned abrupt changes in water clarity or color streaks countless times through the years and how they can be exceptional focal points, especially during the colder months. Well, this was the epitome of the perfect color streak. The cobalt blue post-front sky allowed the mid-morning sun to beam down causing this muddy streak to absorb sunlight providing warmth and temporary refuge for nearby mullet. They weren’t necessarily flipping out of the water because of the extreme cold water temperature but we could see plenty of swirls in and along the well-defined edges of the streak.

We alternated back and forth between MirrOlure Catch 2000s and Paul Brown Original Corkys. The wind and tide were opposite one another which is about the best set-up we could ask for because the fish were facing into the current and the wind was quartering at our backs. For more than an hour we caught trout to 27 inches and redfish to 30 inches by casting up-current and letting the tide bring our plugs along the transition from clear water to turbid water. Sometimes our baits would get violently slammed at the top of the gut in 2 1/2 feet of water while other times we’d get hammered at the end of the trough before it dropped off along the nearby deep 7 foot ledge. Between the trout and reds we caught over 70 fish with very few of the trout weighing less than 4 pounds.  Most of the reds were in the upper slot range. We won 2nd place in the tourney and also were able to take home a healthy Calcutta pot. It was an incredible day of fishing created by a plethora of factors that culminated over weeks and months to ultimately come together to create the perfect storm.

As of the timing of this writing (late October) things seem to be shaping up quite differently compared to the events leading up to December of 2006. Our bay-wide salinities are above average as we haven’t had any substantial rainfall in our local watershed and river flows are way down. The Trinity River at the Lake Livingston Dam is currently flowing at around 1,500 cubic feet per second. With only two months left before the end of the year Galveston is still almost 25 inches shy of achieving its annual average rainfall. We’ve only had a few weak fronts, so bay water surface temperatures are still ranging in the low to mid-70s. We’re actually still catching trout and redfish drifting open-bay reefs while chunking Bass Assassins. Crazy!

Of course a lot can (and probably will) change in the weeks to come but I’m inclined to believe we’re in store for a scenario more closely resembling our most recent drought years (2009-2014) where fish congregated not only near the mouths of rivers, bayous and tributaries, but even further upstream. As of now we haven’t experienced any mass exodus of shrimp or other forage species. One thing is for certain, though. We will get some big cold fronts moving forward. But, if the rains don’t come with them and we only experience water temperature decreases, then that likely means our fish will concentrate even more heavily in those upstream areas mentioned. If this scenario plays out we need to be careful not to lean on those areas too hard. Release as many as we can and don’t sore mouth the same pods of fish every day because we’re going to need them down the road.