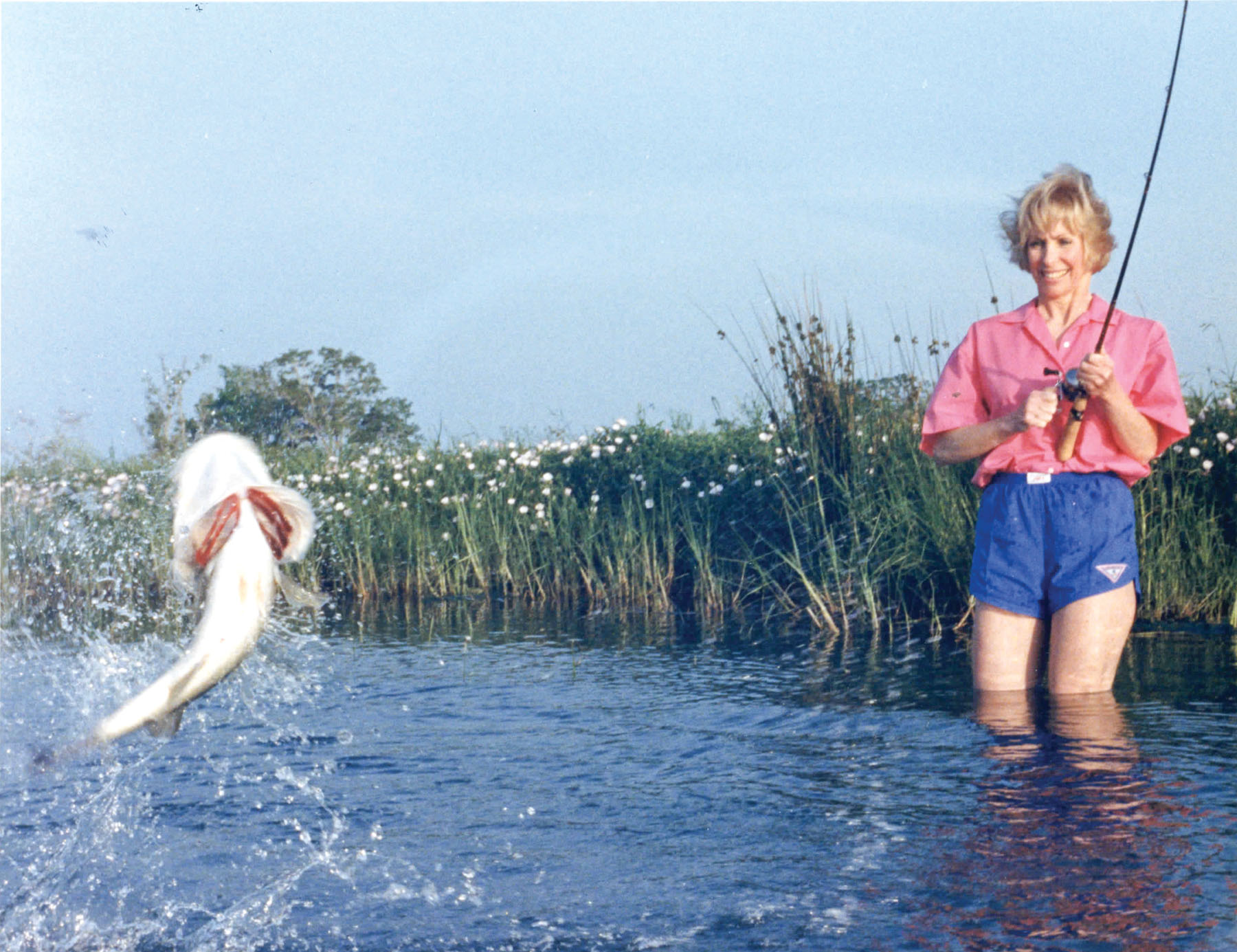 Wading brings out the best in bass but the method is seldom used.
Any angler seriously considering the purchase of a Texas All-Water Fishing License surely realizes that the top sport fish in freshwater is Micropterus salmoides, the largemouth bass, and the top fish in saltwater is Cynoscion nebulosus, the spotted seatrout.

OK, "bass" and "trout." Or maybe "bigmouth" and "speck."
By whatever names, the two fish are the traditional twin bill of light-tackle fishing in the Lone Star State. Measure by economic impact and overall participation, the reservoirs were built on bass and the tides were turned on trout.

Many similarities between the two species exist and, no small issue, the same basic tackle can be used on both. For anglers within a reasonable commute to the coast, it's easy to be a fresh/salt Texas Two-Stepper.

But which is best - bass or trout?

Here are a few observations based on 50 years of chunking in lakes and bays:

SIZE - The bass gets the nod for top-end potential, although in the real world on public water a 10 pounder of each species is a career fish and a five or six pounder is regarded as brag-sized.

But the largemouth bass (usually Texas/Florida strain) is the certified heavyweight. The Texas record is 18-plus, with five more fish topping 17. Conversely, the Texas record for spotted seatrout is acknowledged by TPWD as 15-6. The previous record was 13-11, besting two prior marks in the 13-plus category.

However, it is significant to note that all of the top six bass were caught from a single venue - Lake Fork. And all were caught during the golden big-bass era between the late '80s and early '90. Monster bass production in Texas has tapered off, but fish topping 13 pounds (qualifying for the state's ShareLunker hatchery program) remain legitimate.

It also should be conceded that bass can be reared in small private ponds and lakes saturated with forage and groomed to produce mega-fish. These jumbos behind locked gates are similar to giant whitetail bucks raised on high-fenced ranches. I'm not calling foul, just making the case that speckled trout in open water have a reduced chance of achieving maximum growth/weight.

But, bottom line: The bass is bigger.

AVAILABILITY - Both bass and trout offer year-round angling opportunity - a huge plus for Texas. Fresh or salt, any given day potentially can yield an epic session.

But the bass again gets the nod. The obvious advantage of statewide abundance aside, the largemouth can survive, even flourish, amid unlikely environs. Forget about reservoirs and ponds, rivers and creeks - I'm talking about drainage ditches, reflection ponds, golf-course water hazards, stuff such as that.
I once caught a bass from a bathtub (true story).

Bass also are more tolerant than trout of water quality; a downright mud hole can yield bass for the opportunistic angler. That's why they invented the safety-pin spinnerbait.

And wind direction is not the deal-killer in freshwater that it can be on the coast. A whipping southwest? No problema on a South Texas stock tank.

Bass are tougher against environmental upheavals. A "blue norther" dropping water readings into the high 40s for several days can trigger a massive fish kill along the coast. Bass in lakes just hug bottom and grump around until conditions moderate.

During my 35 years on the Outdoor Desk of the Houston Chronicle, I do not recall a single significant freeze kill of largemouth bass on the East Texas reservoirs. Nor, for that matter, any major die-offs attributable to summer heat.

The bass can adapt and is built to last.

TECHNIQUE - A big bass or trout on proper tackle is a major encounter, and the one-on-one contact when wading takes the game to its highest level. And, not to be lost in this debate, wading is a very effective approach for large specks.

Bass certainly can be caught on foot but the great majority of anglers work from boats. And, in truth, not many monster bass are hooked in less than three or four feet of water. The so-called "Big Bass Belt" from 8 to 15 feet statistically yields the majority of double-digit fish. I've caught three 10-plus bass and all came from within that belt.

Conversely, the top-end trout are within reach of the shin- to waist-deep plugger or fly rodder; in fact, the solitary old sows prefer roaming the sand and grass flats as they search for large baitfish. I've caught two 10-plus specks and both came from less than waist-deep water.

Many anglers hold that topwater fishing is the king thrill, and the shallow sow trout play to this hand. Most big bass are caught on or near bottom. But, having said that, it must be acknowledged that a revved-up bass can really blast a floater.

And many excellent topwater opportunities are available for solid bass in the two- to five-pound class along shorelines of lakes and ponds. Even a one-pound bass can take a lusty whack at a jiving lure.

Pound-for-pound, the bass can detonate on top as well as any fish this side of a pavon (peacock "bass") in the Amazon. Check out the maw - they don't call it a "largemouth" for nothing. This is a fish that will snatch turtles, birds, snakes, rodents, anything short of a raccoon off the surface.

The surface action often is best early and late in the day (warm weather), the most pleasing times to be out chunking. Easing along a quiet shoreline and casting a topwater lure to defined targets such as "stickups" and rims of weed beds brings out the best in bass.

But the really big ones usually stay down while the 30-inch specks are prowling across the bay flats. Score this one for the trout.

FIGHT - Both bass and trout are fine game fish, but significant differences in the fight exist.

The bass is powerful, short and chunky, but short-winded. The fight even with a double-digit fish is a done deal within a few moments. Note I say "moments" not "minutes."

Some of this has to do with the heavier line and tighter drag and stiffer rod used by the serious big-bass specialist. The heavy tackle helps set the hook in a thick, rubbery jaw and snub the fish from tangles of sub-surface cover. Bass are ambush-oriented predators and the big ones seldom are encountered in open water over clean bottom.

You've got to stiff-arm the fish right now or risk losing it when it bores into logs or brush or weeds. And a bass, like a snook, will do just that, dive for cover if you give it any opportunity. It's a rookie mistake to allow a bass to swim at will amid potential tangles. You pour it on and hope everything holds.

But, even in the open, a decent bass tires quickly. Seldom is a bass capable of a sustained run of more than, say, 10 yards. Let me put it another way - I've never seen it happen.

Conversely, the trout often is played on a long line in open water. Specks are clean fighters, rarely digging for cover. And, in truth, "hard" cover is a fluke along the typical bayshore.

The open arena allows the angler to use lighter tackle and a looser drag. Frankly, it's another rookie mistake to clamp down and attempt to horse a big speck too close, too fast. The fight is a prolonged drama as the fish takes line against moderate drag pressure.

A good trout often hangs near the surface, with the line stretching high across the water. The fish may make a determined circle, often showing in dramatic boils and wallows. Thrashing head-shakes are common.

This is nerve-wracking business because each time you know - Just absolutely, positively know! - the lure will fly free. Incidentally, the trout does have a solid jaw hinge, and a 30 incher stuck with a quality hook in the corner of the maw is going nowhere unless you ham-hand the tackle.

But you don't always know about hook placement. But you do know that the thin membrane framing the jaw tears easily. This is not what you want to think about if you see the plug clinging by a single hook to the pulled skin of the upper lip as a career fish explodes in a vicious rod-dipping, line-stretching thrash.

This propensity of big trout to toss lightly set hooks explains why hard-core pluggers are prematurely graying or balding. Or both.

Not all great game fish jump (bonefish and redfish being good examples), but leaps add major excitement to the encounter. Both bass and trout are capable of dramatic full-body jumps, but the bass is the most consistent leaper.

Even bass hooked in deep water usually make several head-shaking jumps - maybe one way out there after initial contact, then one or two in close. Frankly, the bass that does not jump at least once is the exception.

The speck that jumps is the exception. Most roll and lather but the full-body leaps are not typical. It is my observation that the trout most-apt to leap is hooked deep in the throat. These fish often jump high and wide several times.

But the bass is the big jumper and you would think the opposite, based on the shadow-hugging nature of the bass.
Let's cut to the chase - or reach for the net. Jumps or no jumps, I believe the overall experience of the fight goes to the never-sure-deal of playing a good trout across open water. For better or worse, you have the time to savor the stress.

AESTHETICS - This is a vague but valid measure.

First, appearance. The largemouth bass is a good-looking fish in a thuggish sort of way, with heavy jaws, thick belly, and bristling fins. The green back, bold lateral line and silver belly are striking.

The spotted seatrout is more streamlined and graceful, similar in profile to the cold-water trout and salmon. A big one has undeniable elegance. The hues of silver and lavender and the profusion of black spots are gorgeous on a green tide.

As they say, "beauty is in the eye of the beholder." This is a subjective call, but on my card the trout wins. Of course, Bill Dance or Ray Scott may see it differently.

The trout also wins on wildness. Marine hatchery efforts aside, the next quality speck you catch almost certainly will be a wild fish, born on the whims of wind and tide. There's a lot to be said for this if you look beyond the immediate gratification of a bent rod. Wildness is increasingly hard to find.

This is not to totally trash the bass. But all Texas/Florida-strain largemouths stem from hatchery stocks. Scattered wild bass remain, not the least of which are the diminutive Guadalupe bass native to Hill County streams, but the overall fishery is built and sustained by hatcheries.

That's fine - but it's not as fine as a wild resource. Trout move with the natural forces of nature. Most bass thrive because of dams. Giant reservoir or small pond - same deal. A man-made barrier provides the habitat.

Texas is fortunate to have great year-round fishing for bass and trout. One carries well to the other, and with minor tweaks the same equipment can be used. The open-minded angler would do well to enjoy both. Each, under the right circumstances, can provide an excellent fishing experience.
But, bass or trout, which is best?

My vote goes to the trout. The speck has an aura that the bass cannot equal. The big trout is our spotted grail, the best we've got.