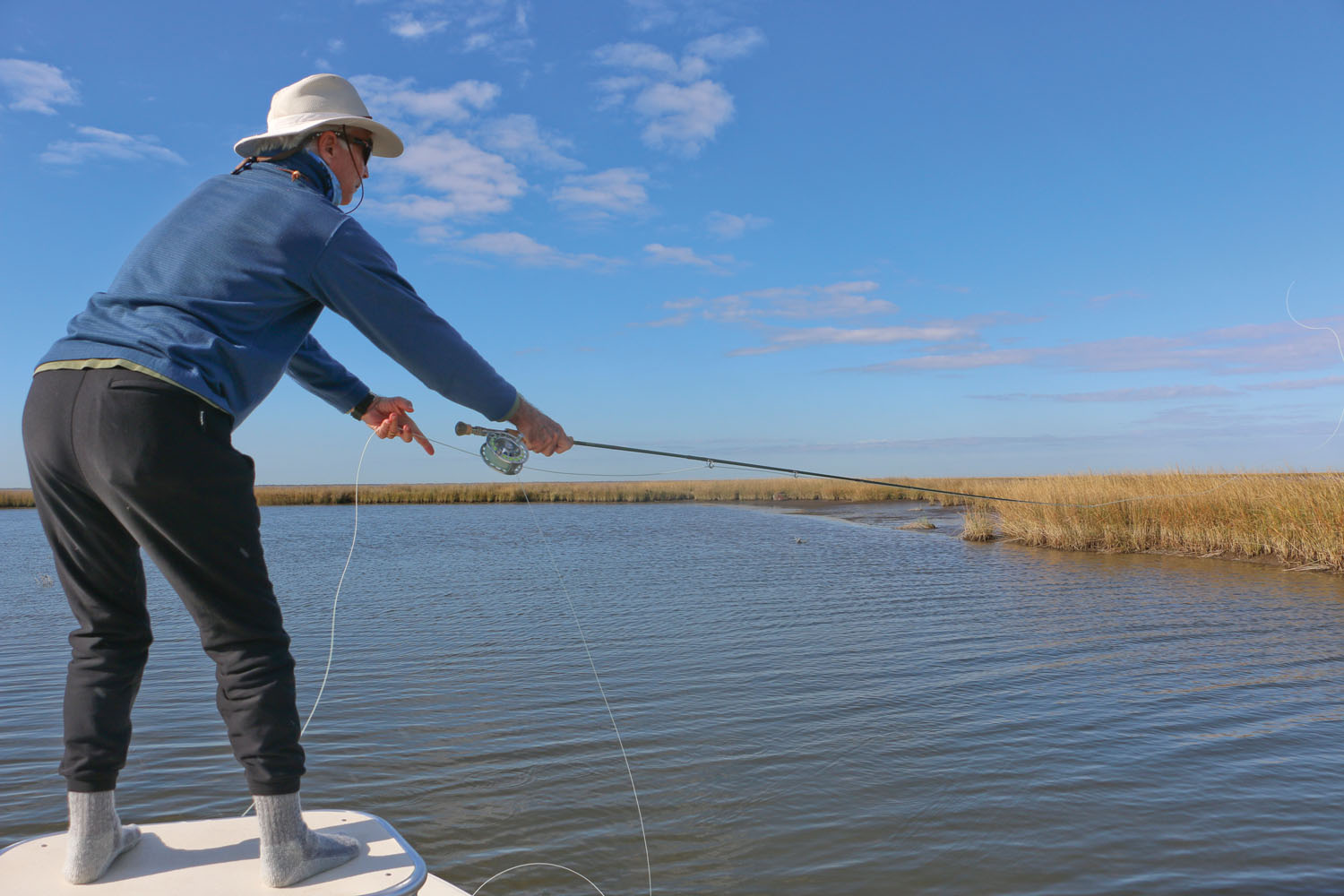 I stood with a 9-weight fly rod on the bow of the flats skiff. The four-inch streamer fly was pinched in my left fingers and about 15 feet of fly line belly trailed alongside. I pointed with the rod tip to confirm the mark, aiming about 60 or 70 feet across the murky water.

Frantic redirection found the vague image of bronze grumping along near bottom in three feet of water, now almost under our shadow. The rod flipping a quick backhand delivery and the short belly lobbed across the water. The yellow-and-tan bead-eyed streamer plopped down and jerked forward.

The 20-pound bull red saw the motion and surged forward. The thick head and shoulder broke the surface and the white mouth gaped scant inches behind the streamer. Then, in a nanosecond, the red spooked, "bouncing off" the point-blank boat.

"Too late," Dietz clucked. "If you'd gotten right on him, we'd have hooked him."

My fumble and bumble was the common mistake in the close-quarters drill of sight-casting to redfish. Fishing partner Ed Cappel had muffed a similar easy shot 30 minutes earlier. Our reactions were identical and the correction is simple: Be ready for the chip shot.

Cappel and I both know better, but "knowing" and "doing" aren't always the same thing. The temptation to look long can be overwhelming when scanning for fish. We readjusted our sights and wound up hooking seven or eight reds between six and 12 pounds. Most were pegged inside 35 or 40 feet.

Cover the close water first and you have ample time to readjust if a fish is spotted out on the perimeter. Conversely, failure to execute the quick draw can cost an otherwise catchable fish. Remember, with fly or plug, if the fish is incoming and the boat is moving, closing the gap, you have only a few seconds in which to make something positive happen.

Dally beyond that count and you risk the galling sight of a big red boiling away at point-blank range, fleeing "with all the lights on."

But, in the sum, our coastal bays and backwaters can be a bit froggy. The closer you get to the Mississippi Delta, the truer this is. And, on that note, many Lone Star anglers are no strangers to the fish-rich estuaries of Louisiana.

Suspended sediments often are aided and abetted by drab bottom mud or aquatic vegetation. Add a puff or two of south or southwest wind (opposed to the prevailing east-southeast) to stir mutinous chops, and sub-surface visibility almost certainly will suffer–at least along exposed shorelines.

And, oddly, in sandy-green water bold redfish sometimes are not the easiest fish to spot. You would think they would be, but the big red just sort of... appears. Right there! Worth note, the gray/black back of a big sow trout can be even harder to spot as the fish ghosts across a grassy flat.

Don't be a chump. To repeat, this ain't Andros. You normally don't need 70 or 80 feet of fly line stripped from the reel and surely tangling under foot in the coastal breeze. If you throw half that distance on a sighted fish (opposed to random blind casting), consider yourself fortunate. Pulling 50 feet or so from the reel should cover the high percentage of shots.

On the subject of fly line, holding 12 or 15 feet of the fat belly off the rod tip allows the rod to load with one or two backcasts for a short, accurate presentation. The accepted drill when standing and watching is to let the belly sag from the tip and drag alongside the skiff as you pinch the fly in the off-rod hand.

Put another way, the angler standing on the bow with a mere four or five feet of fly line dangling from the rod tip must fan the air with numerous frantic false casts to feed sufficient line weight to propel the payload. By now, the fish probably has bolted amid a puff of sand.

Of course, the quick-draw tactic of trailing the belly assumes that stringing grass (most common during windblown afternoon hours) isn't an issue. A wad of moss clinging to the floating line doesn't do much for the aforementioned crisp presentation. Neither does stepping on the line all the more reason to keep the stripped coils to a minimum.

Because the close cast is so common when poling for redfish, several line manufacturers offer specialized "redfish tapers." I believe Scientific Angler was the first. This design compresses the thick belly section into a shorter length, perhaps 20 or 25 feet (sandwiched between the forward taper and the rear taper of the head section) permitting more line weight to help load the rod inside 30 feet.

This compressed configuration lobbing onto the surface doesn't do much for a finesse presentation, but it certainly supercharges the close-range quick-draw.

On a windy day, going up one line size adds authority to the short game; in other words, slap a 9-weight redfish taper on an 8-weight rod. The same over-lining applies if conditions favor using larger, bulkier flies. Worth note, in marginal visibility "big" often trumps "small" in attracting redfish.

This line business is worth considering. Most bonefish tapers are designed for long, subtle presentations with smaller flies; many of these lines require 35 or 40 feet off the tip to begin to properly load a fast-action rod.

A shorter leader also helps. A 10-foot bonefish leader doesn't transfer energy from a close loop as smoothly as, say, a 7 or 8 footer. This especially is true with a bushy flu-flu streamer. Redfish typically aren't leader shy, anyway, especially in murky water.

The same quick-draw concept applies when plug or spin casting. Forget about the graceful overhand delivery and be prepared to zip a low-arc shot to cover the close chance. A flat sidearm cast or underhand pitch that you can "feather" down with a soft plop is the percentage choice.

A compact, heavy payload that loads smartly and sails with authority helps punch across a contrary wind. A lead-head jig/tail combo or a suitable spoon is an excellent choice–with the latter probably getting the flashy nod in sandy water. The killer baits come and go, but nobody ever said the venerable gold spoon wasn't on the A-List for Gulf Coast reds in shallow water.

Plug casting styles vary, and what works for you is what counts, but I prefer a longer rod (say, a seven footer) with sufficient flex in the tip to load for a short-range cast. And, when style points are at stake, I vastly prefer clean casting tackle over clattering spinning gear.

But hard logic must concede that the proper spinning outfit is an excellent choice for close, fast, trouble-free pitching and side-arming. This especially is true for the inexperienced angler apt to ham-hand a freewheeling casting reel.

Fly casting or plug pitching, the response time when sight-casting to redfish essentially is the same. And focusing–literally–on the close water often is a big key to success.